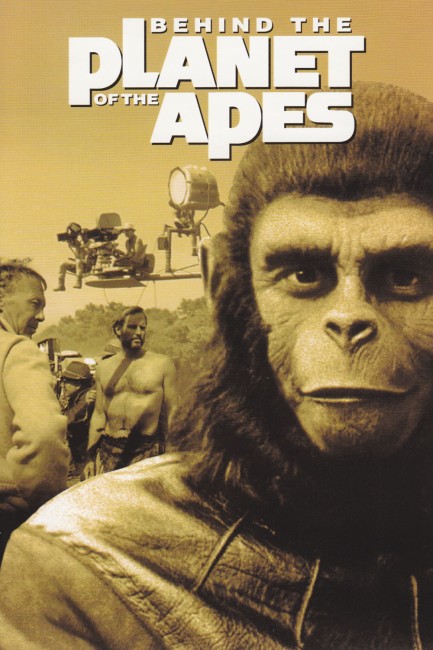 Behind the Planet of the Apes is made by David Comtois and Kevin Burns, two men who are clearly movie buffs – Burns had previously directed other documentaries such as The Fantasy Worlds of Irwin Allen (1995), Hollywood Aliens and Monsters (1997), Monster Mania (1997), 20th Century Fox: The First 50 Years (1997), Lost in Space Forever (1998), Cleopatra: The Film That Changed Hollywood (2001), Empire of Dreams: The Story of the Star Wars Trilogy (2004) and Star Wars: The Legacy Revealed (2007), all of which it should be noted concern 20th Century Fox films and personalities. Burns has also produced several Alien Nation tv movies, a number of biographies for the A&E channel and a series Monsterama about monster movie collectibles, as well as various tv series about other films like Hollywood Backstory (2000-5) and Hollywood Science (2006). Burns has also acted as an executive producer on several Irwin Allen remakes – the tv pilot for a new The Time Tunnel (2002), the big-screen remake of Poseidon (2006) and the revived Lost in Space (2018- ).

Behind the Planet of the Apes is an impressive documentary. It covers almost anything one might have ever wanted to know about the Planet of the Apes series. Burns and Comtois manage to dredge up some incredibly obscure footage – an early test reel for Planet of the Apes that was made to interest studio executives that features Charlton Heston, Edward G. Robinson as Dr Zaius and James Brolin as Cornelius and with much more limited ape makeup. There is behind the scenes footage of just about all the movies; makeup test reels and shots of Roddy McDowall having his makeup applied; even test shots of an unused idea for a human-ape hybrid that was planned for Beneath the Planet of the Apes. We are given fascinating glimpses of the artwork that Arthur P. Jacobs had commissioned to interest studios, which displays Rod Serling’s vision of a much more technologically advanced ape civilisation that was scaled back in the finished film.

Many of the principals offer fascinating insights into the making of the series. Roddy McDowall and Kim Hunter talk about the need to exaggerate their movements behind the ape makeup. Charlton Heston is present to offer some interesting revelations into his influence on key scenes – how the famous “Take your stinking paws off you damn dirty ape” line came out with much more effect due to the fact that he had a bad cold and was talking through a hoarse throat on the day of shooting; or that it was his idea to blow the world up at the end of Beneath the Planet of the Apes to prevent any more sequels.

We see the origins of some of the concepts – production designer William Creber showing how he based the designs for the ape city in Planet of the Apes on Turkish Troglodyte caves and John Chambers on how the mutant makeup in Beneath the Planet of the Apes was based on pictures from a medical encyclopaedia of faces that had been stripped to the epidermis. We are also granted some fascinating glimpses of alternate ideas that never made it – the aforementioned ape-human hybrid idea in Beneath that was nixed by the studio out of fear of any suggestion of miscegenation, or the discussion of the alternate ending for Planet of the Apes that would have featured a pregnant Nova. All fascinating stuff and any fanboy’s dream.

Film historian Eric Greene is interviewed and throughout offers analysis of the political context of each movie – tying the scenes where Charlton Heston is tried by the close-minded council in Planet of the Apes to co-writer Michael Wilson’s blacklisting by the McCarthy witch hunts during the 1950s; drawing parallels between the student protest scenes and the ape invasion of the Forbidden Zone in Beneath the Planet of the Apes to Vietnam era militarism and student unrest; and with much discussion spent on the analogy between the ape revolution in Conquest of the Planet of the Apes and the Watts Riots of the 1970s, with director J. Lee Thompson speaking about how the film’s greatest popularity was among Black audiences who cheered the apes on. (Interestingly, former 20th Century Fox head Richard D. Zanuck is present and denies any awareness of political subtext during the making of the films). A reasonable amount of time is spent on discussing how Conquest of the Planet of the Apes had to be cut for violent content and how the studio demanded that Caesar’s militant speech at the end be reedited into something more upbeat than was originally intended, ending as it now does on a note of pacifism and peaceful coexistence between apekind and humanity.

The only real complaints that one could make about the documentary, aside from wishing there had been some coverage of the tv series’, is the tendency of Roddy McDowall’s wraparound narration towards what one could E! Entertainment banality – where all other films are discussed are automatically awarded that status of ‘wonderful classics’. At least the documentary is more balanced when it comes to discussion of the films – although one suspects it is somewhat kinder to Battle for the Planet of the Apes than the general public was. It all ends on an underwhelming final summation from McDowall: “Can we expect more adventures on the Planet of the Apes? Perhaps the answer lies somewhere in the stars or here on Earth.”