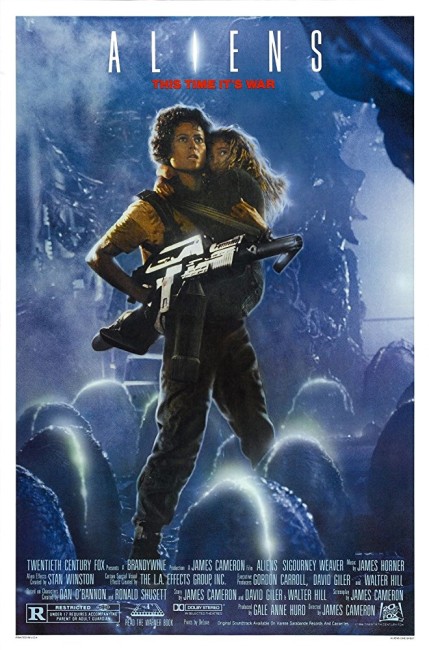 Ripley is found by a salvage team in hypersleep in the Nostromo shuttle, having drifted lost for 57 years. Revived, she reports her story to The Company but faces disbelief, being told that the planet where they encountered the alien is now an inhabited colony and nothing untoward has been reported. Suddenly all contact is lost with the colony Acheron. The Company forcibly recruits Ripley as advisor to a detachment of investigating marines. Arriving, they find the entire colony massacred. The aliens then emerge to effortlessly slaughter the self-assured marines. The shuttle is destroyed in the panic and Ripley and the handful of remaining marines are left trapped on the planet, surrounded by the aliens.

There is a very small niche reserved for those sequels that compare favourably to their predecessors – and in that niche there will probably always be a place reserved for Aliens. Aliens is of course the sequel to the mega-successful Alien (1979). Aliens was also the third directorial film of James Cameron, who had previously had a big hit with The Terminator (1984). The Terminator was fairly much a B action movie with a B+ budget – and one that looks far better at home on the small-screen than the big. With Aliens however, James Cameron opened up onto the big screen with remarkable assurance.

James Cameron’s script adventurously takes up some of the slack left by the first film. The fact that the alien used its victims’ bodies to lay eggs in was an aspect that was cut from the final screen version of the first Alien for pacing reasons. Cameron picks that idea up here. Furthermore, at the climax, Cameron asks the logical question of who it was that laid the original eggs – with remarkable results.

Cameron is not above repeating some of the pieces that made the first Alien a success, notably the climax with Sigourney Weaver for sentimental reasons making another insanely reckless journey back through an about-to-explode power plant full of flashing lights, hissing steam and tannoyed warnings, to rescue not a cat but a child, and another just-when-you-thought-you’d-killed-the-alien blow-it-out-the-airlock climax. Cameron has also added the paramilitary predilections that fill some of his films – the characterisations of the hard-boiled marine corps are pure Joe Haldeman – which has turned Aliens into a science-fiction military hardware junkie’s heaven, while also eliciting a great deal of praise from feminist circles for its tough, realistic portrayals of women.

However, it is when James Cameron gets down to the suspense that Aliens becomes an extremely intense film indeed. Shot in red emergency lighting amid low-gridded roofs and narrow airshafts, the film takes on a genuine sense of claustrophobia. The initial venture into the complex is a long, tightly drawn-out orchestration of tension that becomes almost unbearable before James Cameron pulls the punch. The big climax with Sigourney Weaver in clomping exo-skeletal waldo, facing off the giant mother alien on the edge of a depressurising airlock, has an entire theatre on the edge of its seats.

Aliens was one of the first films to be released with a director’s cut that substantially expanded on what had been seen in the theatrical version. For this version released in 1992, James Cameron added a further 17 minutes of footage. These scenes include material that shows events on the colony prior to the massacre; a subplot concerning Ripley’s discovery that her daughter grew up and has died during the time she was in cryosleep; more about Newt’s background; and a number of other scenes with the Marines heading through the labyrinth.