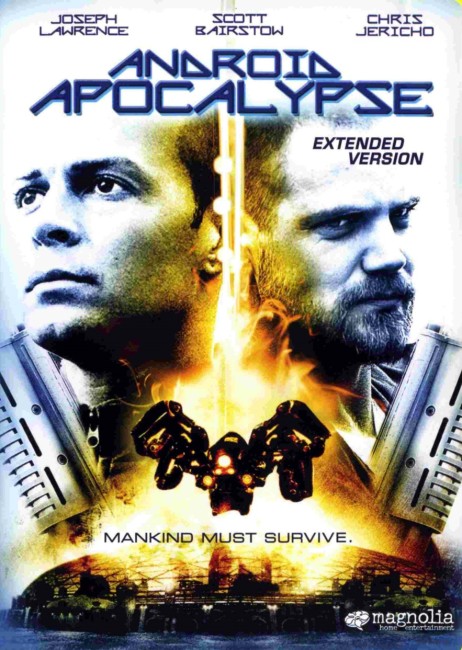 In the future, humanity lives in domed cities, protected from the desolate wasteland outside. Androids, derogatorily nicknamed ‘cogs’, have been employed to provide labour. Greydon Jute, a labourer in the city’s furnaces, is angry after he is replaced by an android. In a barroom brawling competition, Jute takes on an opponent that he knows is an android. Later outside the bar, Jute challenges the android to finish the fight but is shocked when he kills it. He is arrested and sentenced to Terminus prison in the middle of the desert. On the journey there, every human prisoner is chained to an android via an unbreakable link. Jute’s companion is DeeCee 142, an android that has been sentenced to Terminus for reprogramming after it appeared to demonstrate feelings. Jute and DeeCee are able to make an escape when the prison van is attacked by rogue robotic drones. They try to make it back through the desert. In the course of doing so, both end up having to rely on the other and in so doing come to change their views.

Android Apocalypse is a routine made-for-dvd film that was sold as an sf/action hybrid. Conceptually it emerges as a science-fictional reworking of The Defiant Ones (1958) – the classic film that featured Sidney Poitier and Tony Curtis as a Black and White prisoner who escape from a prison gang while chained together and during the cooperation imposed in the course of their flight end up moderating their prejudices about the other. Android Apocalypse substitutes a human and an android but essentially features the same conflict – of a bigoted man and a minority forced to cooperate while chained together. It should be noted that the The Defiant Ones premise was also borrowed by science-fiction before as the cheaply made Wedlock/Deadlock (1991).

In Android Apocalypse, this concept transpires as a story that is mostly cliches. The journey across the desert where we see the two characters mellowing in their views works with modest effectiveness. The film becomes considerably less interesting during the second half once it drops its Defiant Ones scenario. Thereafter it becomes only a standard prison-revolt story, added to the old hat plot of a mad scientist wanting to turn the whole world into androids, which we have seen in a host of other films – Scream and Scream Again (1970), Futureworld (1976) and Vexille (2007).

Sometimes the logic the film operates by is uneven. I had a problem with the central notion of the hero being sentenced for the murder of an android, especially in a society where there seems such unease and prejudice against androids. Rather than murder, surely the more likely option would be for the hero to be charged with the destruction of property? It also does not seem credible that Scott Bairstow would destroy an android in a fit of resentful anger and then have a crisis of conscience that he has killed one, especially if he does not regard them as anything more than machines. It is a character twist that seems implausible.

Joseph Lawrence, who looks like a young Jean-Claude Van Damme, does the impassive, emotionless android thing well. It is here that the film rigorously follows the logic of androids, rather than allowing them to freely portray facial expressions as most actors playing androids do. In actuality, every facial expression an android shows would have to be a learned response – if an android does not know the emotion of fear or surprise, then how can its’ face display such? Unfortunately, when it comes to other androids – notably Anne Nahabedian’s pursuing nemesis – she is inconsistently shown to be relishing the cruelty of the hunt and not impassive at all.

There are a number of action scenes, which are competently handled if nothing exceptional. The special effects are passable for a low-budget film of this type, if occasionally spotty. The insectoid robot drones are highly effective and lethal looking. There are some decent cityscapes of the domed city interiors.