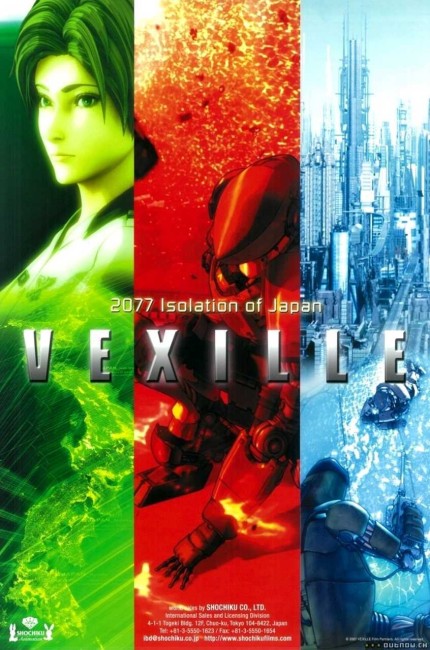 In the year 2050, the UN outlaws the creation of androids. In the year 2070, Japan decides to ignore these laws and shuts itself off from the world, creating R.A.C.E., a barrier that shields it from all surveillance and communications, even visibility. After ten years of silence, a conference is held to decide what to do about Japan. However, Saito, the representative from Japan’s primary exporter Daiwa Heavy Industries, kills the delegates before he is stopped by a squad from the anti-terrorist organization SWORD. Under examination, SWORD discovers that Saito is an android that is more sophisticated than anything known before. It is decided that a team will be sent to infiltrate Japan to determine what is happening. An American freighter is deliberately blown up in Japanese waters so that the Japanese have to rescue it; however, a commando squad is hiding aboard. The ship is taken through the barrier but the commandos are found and massacred. The only survivor is Lieutenant-Commander Vexille Serra. Vexille finds herself in a shantytown where she is amazed at the vibrancy of life among the people there. She then makes the discovery that every single person in Japan is no longer human – that the Daiwa corporation has released a virus that mutates humans into androids at a cellular level. Vexille becomes involved with the people of the shantytown who still remain partially human as they try to bring Daiwa down.

Akira (1988) will always be the cornerstone of modern Japanese science-fiction anime. However, the film that appears to be becoming the most influential to science-fiction anime this side of the 00s is the remake of Appleseed (2004). In Appleseed, director Shinji Aramaki rebuilt the original with some amazing action sequences and a density of depiction to the background of the future that was almost photorealistic.

Without question, Vexille is made in the shadow of Appleseed. There are the same dense, richly detailed cityscapes of the future; the same action scenes with humans in power suits engaged in massively scaled combat with huge machines. Indeed, it does not take too much to imagine recasting the role of Vexille with Appleseed‘s Deunan Knute. The plot about the scheme by a secretive corporation to turn the entire population into a hybrid of machine and human is remarkably similar to the plot in the Appleseed sequel Appleseed Ex Machina (2007), which came out around the same time as Vexille. If nothing else, the connection is made direct in the fact that Vexille‘s director [Fumihiko] Sori was also the producer of Appleseed.

Sori sets up some enthralling action sequences that certainly give Shinji Aramaki a run for his money – the sequence with two SWORD agents pursuing a motorcycle-riding android between rows of packing crates; and especially the penultimate sequences where the various rebels race through the tunnels to the Daiwa laboratory in futuristic dune buggies dragging cables while pursued by The Jags, which are what look like the sandworms from Dune (1984) made up of a whirling vortex of junk metal. The climactic sequences fighting amid the collapsing city have that massive scale of anime action that kicks in with the essential ‘wow’ factor.

Vexille works less satisfyingly in terms of story (but then, so did Ex Machina). The first half of the story contains a great build-up through the infiltration of the barrier, which very much recalls WWII spy films in spirit. There is the dazzling moment that pulls back to reveal that the market shantytown and the whole of Japan around Vexille is all peopled by androids. Thereafter the plot slips into the generic. There seems to be too much running around and scheming between the camps. Eventually, Sori settles on action as a means to wrap the story up but even then his introduction of a villain and his world domination scheme to turn everybody into androids is one that we have seen in too many films before – see the likes of Scream and Scream Again (1970), Futureworld (1976) and Android Apocalypse (2006). The other complaint one might have is that for a film that names itself after its heroine, Vexille is a passive character who never seems to come to the fore of the action. Indeed, she looks so much like the rebel leader Maria that one ends up confusing the two.

Beneath the action, Vexille has an interesting subtext about Japanese racism. Japan has always been a country that has had a traditional sense of its own superiority among other races, of belief in the necessity of keeping its blood pure. On many levels, Vexille reads as an extreme critique of Japanese racism – where Japan’s drive towards business success and becoming a technological world leader has led to the ultimate in isolationism. (The point is made clear in the English-language subtitling, which unsubtly names the barrier R.A.C.E., while the translation of the original Japanese subtitle reads as ‘Japan National Isolation’). The mad scientist’s experiments with the population (who are characterised as a poor but decent underclass) is not dissimilar to the exploitation of the feudal classes seen under shogunate rule and during WWII. Although, the issue of race that the film raises is confused by having the characters look the same standard Asian anime faces, even including the American SWORD team that are conducting the commando raid.

Director (Fumihko) Sori next went onto make the live-action Ichi (2008) about a blind swordswoman and returned to animation and genre material with the science-fiction film Orbital (2009), the fantasy film Dragon Age: Dawn of the Seeker (2012) and the live-action version of the anime Fullmetal Alchemist (2017).