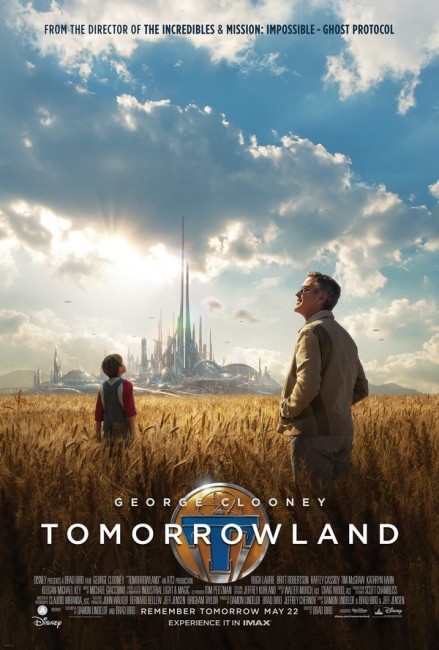 In 1964, young Frank Walker attends the New York World’s Fair but is turned away when he tries to demonstrate his idea of a rocket backpack at the inventor’s fair. The young girl Athena takes a liking to Frank and slips him a Tomorrowland pin, asking him to follow their entourage onto a ride. They are transported into Tomorrowland, an amazing world of invention and imagination come to life. In the present-day, teenager Casey Newton is arrested after she tries to prevent the dismantling of a NASA launch site. Released from jail, she finds a Tomorrowland badge among her effects and is startled when it transports her into the world when she touches it. She is amazed at what she sees – only for the button to die. She goes in search of a way of restarting it but soon finds herself hunted by androids disguised as humans. She is rescued by Athena, who is an android too but says she is a recruiter and gives the badges to people who display extraordinary imagination to encourage them to find ways to build the future. Athena drops Casey at the farm of Frank who is now an embittered middle-aged man. As the androids come in pursuit, Frank realises that Casey may have the talent that is capable of changing the way the future takes place. Pursued, they go on the run where they try to find a way to restart the now defunct Tomorrowland project.

Tomorrowland is one of the Disneyland theme parks. Although there are other Tomorrowlands at Disney World and Paris and the various Tokyo Disneylands, the one everybody thinks about is located at the original Disneyland in California, which opened in 1955. Walt Disney had a strong interest in futurism, producing the Man in Space tv specials during the 1950s among others. In its original form, Tomorrowland was essentially a corporate showcase for various technological innovations but was later expanded into more of an amusement park. The rides at the park have changed over the years and have included simulated spaceflights to the Moon and Mars, submarine journeys, shrinking to subatomic size, a monorail system, as well as the screening of the Francis Ford Coppola-Michael Jackson 3D sf film Captain Eo (1986) and various rocket and space journey themed rides and rollercoasters. Disney has a habit of making films out of its theme parks – as witness previous efforts such as The Country Bears (2002), The Haunted Mansion (2003), the massive success of Pirates of the Caribbean: The Curse of the Black Pearl (2003) and sequels, and the subsequent Jungle Cruise (2021). Here Tomorrowland gets its turn.

The film version of Tomorrowland comes from Brad Bird. Bird started out as an animator and gained attention with the hilarious Family Dog, which was the best episode of the Steven Spielberg-produced anthology series Amazing Stories (1985-7). After co-writing the script for the live-action Batteries Not Included (1987), Bird did work on animated series like The Simpsons (1989– ), The Critic (1994-5) and King of the Hill (1997-2010) and then a few years later made his directorial debut with the fine The Iron Giant (1999). Though it received critical plaudits, The Iron Giant was not a box-office success, nevertheless it subsequently had Bird employed at Pixar where he delivered The Incredibles (2004) and Ratatouille (2007) to enormous success. This was enough to net Bird the opportunity to make his debut as a live-action director with Mission: Impossible – Ghost Protocol (2011), which quickly became the best of Tom Cruise’s Mission: Impossible films.

Brad Bird clearly has a love of retro-futurism and old science-fiction from the 1930s-50s. Posters and homages appear in the background of The Iron Giant, while The Incredibles borrows the Googie designs of 1960s futurism and Mission: Impossible – Ghost Protocol is filled with a love of super-scientific James Bond-styled hi-tech gadgetry. Even aside from its gadgetry and inventions, Tomorrowland comes filled with a character named after pulp editor Hugo Gernsback who is regarded as the father of modern science-fiction, as well as a side-trip to Steampunk-styled diorama with figurines of inventors/visionaries like Jules Verne, Thomas Edison, Nikola Tesla and Gustave Eiffel.

I had high hopes for Tomorrowland on the grounds that I have been impressed with everything that Brad Bird has directed ever since Family Dog. I must however say I was disappointed with Tomorrowland. The trailer of the film sets up an exciting promise – the magical badge that transports Britt Robertson into the titular realm of wonder, scenes of she and George Clooney wielding an arsenal of rayguns and super-scientific devices. Beyond that, there is the idea of the Disneyland attraction Tomorrowland, which sets up the promise of a future of extraordinary technological wonder where anything seemed possible. The great disappointment of Tomorrowland the film is that – just like the vision that Britt Robertson is given when she touches the badge (which we are told is a commercial) vs the ruined and rundown Tomorrowland she actually discovers when she arrives – the trailer promises a far more wow-tastic vision than the rather glum and depressing film that we get.

Of all the amazing ideas that you imagined Tomorrowland would wheel out – the promise of rayguns, rocketships, robots, shining cities of the future (which to Bird’s credit we do get some of) – what you least expected was such a pessimistic film. At every opportunity, Britt Robertson is bombarded by teachers talking about or images of environmental collapse, potential nuclear war and news clips from international war zones. A big part of the plot during the early scenes is about her struggling to stop the efforts to dismantle a NASA launch site. While the film is on the side of her struggle in these scenes, the greater vision that this represents – that the promise of all the possibilities of the Space Age that something like Tomorrowland heralded – is now a dead and forgotten dream is something incredibly pessimistic. Even George Clooney’s kid hero when we meet him again in mid-life, has turned into a burned-out and paranoid crazy who has given up on hoping for the future. Britt Robertson’s arrival at a desolate and empty Tomorrowland is greeted by lines like “This place has nothing to do with hope. It is the opposite of hope.”

Now, to be fair, the film’s latter third does have a plot about reversing the tide of pessimism and learning to hope again. However, you cannot help but wonder if the Tomorrowland that Disneyland offered would still be one of its top draws if it didn’t include space and progress themed attractions but a message that first focused on all the grim and depressing things about the present and then tried to convince us that there is an amazing future out there.

What I wanted Tomorrowland to be was something along the lines of Sky Captain and the World of Tomorrow (2004), which does a far better job of incarnating the sense of retro futurism that 1930s pulp adventures and the Space Age offered. Instead, it seems as though we have a work of internal angst about how we must fight an overwhelming tide of negativity. Moreover, the script kinds of shoots itself in the foot when its starts blaming all the negativity on violent videogames and post-holocaust films – I’m sure that everyone who enjoyed Mad Max: Fury Road (2015) that opened the previous weekend will be pleased to know they are contributing to the end of civilisation.

The other thing about this vision of dreaming is that is seems rather naive. When the film introduces Athena the recruiter and the secret world where all the people with ideas are free to invent, I couldn’t help but think of John Galt and The Gulch in Ayn Rand’s Atlas Shrugged (1957) – see the film version Atlas Shrugged III: Who is John Galt? (2014). Both The Gulch and Tomorrowland seems utopias that exist free of real world forces – like questions of who among all these great minds does the menial jobs like sweeping the streets and cleaning the bathrooms?

Even beyond that, the film seems to have the belief that ideas and innovation are good no matter what. While I am fully in favour of allowing creativity its free lack of restraint, it should be noted that all of the major technological innovations of the last decade and a bit – Google, social media, the smartphone and various Apple products – are ones that as soon as they get out of the design lab are heavily patented and corporate branded then heatedly fought over by competitors for dominance of the market. The probable and realistic vision of Tomorrowland would be that whenever someone rides the anti-gravity train they would be bombarded by advertising, the anti-grav pools would be demanding entry fees and the amazing architecture of the future would be interrupted by corporate logos. In other words, Brad Bird’s vision of the future is one that seems to exist in a bubble where the economic realities of capitalism and of labour force do not exist.

The other problem with the film is exactly what is Tomorrowland? The version that Britt Robertson enters into is some kind of glorified hologram as she is clearly physically in the real world while moving through the illusion. Later George Clooney dismisses this as merely “a commercial”. So the question then is – what is the other Tomorrowland that the young Frank visits in 1964 and the ruined one that the older Frank and Britt Robertson travel to by rocketship during the latter sections of the film? We are told this is in another dimension but the film never makes clear how it got there, who the people that inhabit it are and why they are sending androids to Earth to influence the course of its future? You would think that explaining this would be a fairly big thing but it seems to be one that the film’s script entirely omits to considerable frustration. Or for that matter how an entire rocketship could be buried inside a major monument and tourist attraction like the Eiffel Tower without anybody having detected it before?

The problem here might be that Brad Bird co-writes with Damon Lindelof. Lindelof was one of the creators/producers/writers of tv’s Lost (2004-10), which started as one of the most compulsively watchable tv series of the decade and ended in a muddled shaggy dog ending that was universally booed by audiences who had stayed the journey and clearly showed that nobody involved had any idea where the great mystery was going at the outset. Lindelof has moved onto cinema screens with other scripts that have been derided – the universal disappointment of Prometheus (2012), which added Erich von Daniken woolly-headedness to the Alien mix, and Star Trek: Into Darkness (2013), which screwed over the character of Khan among other things – and other works that vary between middling and okay such as Cowboys & Aliens (2011), World War Z (2013), Tomorrowland (2015) and The Hunt (2020), along with the tv series The Leftovers (2014-7) and Watchmen (2019).

Subsequrnt to the box-office disappointment of Tomorrowland, Brad Bird returned to the Pixar fold to make Incredibles 2 (2018)

(Nominee for Best Supporting Actress (Raffey Cassidy) at this site’s Best of 2015 Awards).