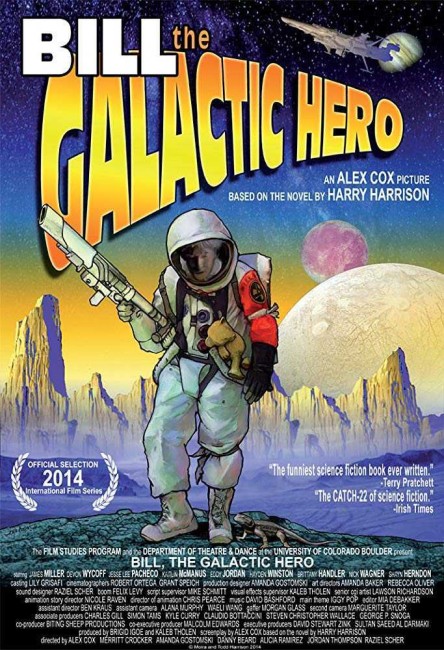 Bill is a pizza delivery boy on a backwater planet when he stumbles into a recruiting drive for the space troopers and is tricked into signing up with the use of drugged beer and hypno-devices. Stationed aboard a starship, Bill is indoctrinated into the pitiless regime of the troopers and their ongoing war against the lizard-like Chingers. Bill is regarded as a hero after he accidentally pushes the button that vaporises a Chinger fleet. He is sent to the imperial capital Helior to receive a medal from the emperor. However, while resting on a bench, Bill’s floor plan of Helior, a city that comprises the entire world, is stolen and he is rendered homeless. From there, Bill passes through a series of adventures in which he is recruited as a double agent in a revolutionary organisation and then sentenced to a prison planet.

In my opinion, Harry Harrison’s Bill the Galactic Hero (1965) ranks as the funniest science-fiction book of all time. Second on my list would be Douglas Adams’ first two Hitch-Hiker’s books, The Hitch Hiker’s Guide to the Galaxy (1979) and The Restaurant at the End of the Universe (1980).

Bill the Galactic Hero was the creation of American author Harry Harrison (1925-2012) who spent a five decade career publishing science-fiction. Among the numerous works that Harrison turned out are The Technicolor Time Machine (1967), Captive Universe (1967), A Transatlantic Tunnel, Hurrah! (1972), West of Eden (1984) and sequels, as well as Make Room! Make Room! (1966), which became the basis of the film Soylent Green (1973). Harrison’s most famous work was The Stainless Steel Rat (1961) about a wryly individualistic intergalactic thief – a series that is eminently filmable and well overdue an adaptation sometime soon – to which Harrison wrote ten sequels. Harrison is frequently associated with humorous science-fiction – check out also his Star Smashers of the Galaxy Rangers (1973), an extremely funny parody of the works of E.E. ‘Doc’ Smith.

Harry Harrison wrote Bill the Galactic Hero as a riposte to Robert Heinlein’s Starship Troopers (1959), later turned into a terrible film Starship Troopers (1997) that bore almost no resemblance to the book. Heinlein wrote a work of gung ho military idealism, depicting a future where citizenship was only conferred by military service. Harrison had served in the army, having been drafted during World War II, which had left him with a lifelong hatred of the military and wanted to depict a reality that was the exact opposite of Heinlein’s veneration of military service. Harrison later allowed Bill to be sharecropped into a series of six other books, writing the first sequel Bill the Galactic Hero on the Planet of Robot Slaves (1991) himself, but was not happy with what the subsequent writers did.

Alex Cox is a British director who first appeared with the cult hit of Repo Man (1984). This gave Cox collateral for a time and he had a further success with the Sid Vicious biopic Sid and Nancy (1986). The problems that began to plague Cox’s career came with his next project Straight from Hell (1987), which started out as a planned European rock tour, which Cox converted into a largely improvised Western using the musicians as actors after the tour fell through. His films over the next few years, Walker (1987), The Highway Patrolman (1993), Death and the Compass (1996) and The Winner (1996), most of which shot in various locations around the world, all suffered from increasingly shrinking budgets, distribution difficulties and critical indifference. Amidst this, there was the debacle of Fear and Loathing in Las Vegas (1998), which Cox ended up being fired from at Hunter S. Thompson’s behest and the project handed to Terry Gilliam. By the time of Three Businessmen (1998), Revengers Tragedy (2002), Searchers 2.0 (2007) and Repo Chick (2009), Cox was shooting films for budgets under $100,000 and churning out works where the cracks were painfully evident.

For many years, Alex Cox had planned to make a film version of Bill the Galactic Hero – as long ago as the mid-1980s when he was still a hot name on the back of Repo Man, although he was unable to obtain funding at the time. From 2012, Cox accepted a teaching position with the film school at the University of Colorado at Boulder. This became the unlikely means whereby he was able to finally launch Bill the Galactic Hero. Cox raised a $114,000 budget via crowdfunding on Kickstarter. The university’s drama school and his film students (many of whom receive co-director credit with Cox) were pressed into fulfilling all the functions on the film.

Ever since the mid-1990s, Alex Cox’s films have started to feel increasingly more obscure and haphazard in nature. They give the feeling of being made with whatever slender resources were to hand and the cracks papered over by whatever he could find. This is painfully evident when it comes to Bill the Galactic Hero. When you are dealing with an intergalactic space opera involving space battles, lizard-like aliens and the depiction of vast city planets, the least likely option it feels to turn to is the amateur drama department of a university.

This becomes excruciatingly evident from the opening scenes, which boast a level of animation so primitive it feels barely one step above children’s doodles in Paint being given the most rudimentary life. Things improve little once we come to the live-action scenes where in the first few scenes the crew quarters aboard the starship are simply represented by mattresses thrown on the floor of what is clearly the drama department’s stage. The visit to the chaplain/laundry room is simply a desk placed in a stairwell, while Helior is merely the halls of the academic facility – at one point, a guard station is represented by a lecturer’s lectern placed in the middle of the hall – and the planetary maps are regular cellphones.

The most painful of these is when Bill has a conversation with one of the Chingers on the prison planet, which is represented by no more than a lizard on a rock. Or where Deathwish Drang’s fangs, one of the famous jokes from the book, are denoted by two fang-shaped pieces of cloth pasted on the outside of the bubble of the actress’s space helmet. Even then the film is crippled by directing choices that make you scratch your head – like the decision to have every actor wear a spacesuit in every single scene, including when eating and drinking, resulting in a film where it is frequently difficult to tell one character from the next.

And okay one or two of the effects shots of ships travelling through space approach a level of basic competence but the rest of the film is amateurism of the worst order. It is high time that the scanty few who regard Alex Cox as still having some collateral since the days of Repo Man and Sid and Nancy realise that this has long been frittered away and that Cox has spent the ensuing thirty years demonstrating the sort of talent and amateurism that wouldn’t even get his films released to the most obscure mumblecore festivals.

It is hard to describe what a painful experience it is watching a favourite work gutted and reduced to something so pitiful. Star Wars/Indiana Jones fans came close to describing the feeling when they accused George Lucas of having raped their childhood. It is not that Alex Cox and co haven’t been faithful to Harry Harrison – most of the book is there and up on screen and follows what Harrison wrote. (Although the surprising things missing are two of the aspects that have gone onto become famous jokes in fandom – the bloater drive, a parody of novelty forms of space travel in which the spaceship is expanded in size to reach between its departure and destination points and then shrunk again, and the jokes about thoat herders).

The BBC’s adaptation of the Douglas Adams books with The Hitch Hiker’s Guide to the Galaxy (1981) similarly had to make do with a sketchy budget that resulted in some painfully cheap-looking effects, nevertheless managed to strike Adams’ sense of absurd humour sufficiently to be enjoyable. In theory, Bill the Galactic Hero could have done the same but it doesn’t by a margin so vast it could be filled by a ship operating on bloater drive.

The problem, one feels, is the tone. Harry Harrison gave the telling a sharp bite – the way you would imagine it would come out on screen is something akin to one of the better British comedy tv series of the 1980s/90s – but this is something that Alex Cox and his students are blind to. They replicate scenes but never enliven the dark, farcical humour. Rendered with the amateurism it is, the film falls fumblingly flat on its face.

BILL THE GALACTIC HERO from Alex Cox on Vimeo.