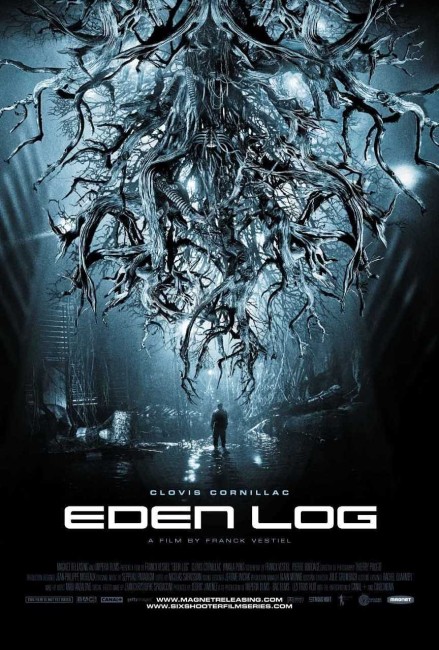 A man wakes up half-naked in an unlit cave with no idea of who or where he is. He makes his way out into the corridors of the facility known as Eden Log. He soon encounters mutated creatures in the tunnels and is hunted by guards, while scientists in contamination suits want to study him. Gradually, he comes to understand that Eden Log was engaged in an experiment to find a new power source from a giant tree. The experiment went wrong when workers sent down into the tunnels were contaminated and started to mutate. As he makes his way up through the facility, the man comes to realise that he may have been the architect of Eden Log and that he has emerged from the depths with strange powers.

Eden Log is an exceedingly puzzling, although not uninteresting, science-fiction film. It was the directorial debut of Franck Vestiel, a former assistant director on various French films. It screened theatrically in France and some film festivals, although mostly went to dvd release and attained little notice.

Eden Log is one of those science-fiction films where you never have a clear idea of what is going and that only exists in terms of a series of baffling half-clues. Think less 2001: A Space Odyssey (1968) than another French entry – Luc Besson’s first film Le Dernier Combat (1983), which was similarly shot in black-and-white, took place in a cryptically unexplained post-holocaust future and featured very little dialogue.

As to what stands for a plot, imagine a synthesis of Cube (1997) with people waking up with no memory of who they are and trying to make their way through a labyrinth, combined with the mystical return to a communion with nature ideas of Avatar (2009) – but with anything that explains what is going on in any of these having been removed.

The film opens with Clovis Cornillac awakening in mud, half-naked and then making his way through the labyrinth. We only get partial hints of what has happened – fragmentary recorded images of some type of disaster; that there are mutants in the labyrinth, including the surreal image of a man trapped half-devoured in a Venus Flytrap-like plant; that Clovis Cornillac may be the architect who designed the place; that the surface has been reduced to ruins; that Clovis now has strange abilities to bring plants to life – but the film deliberately withholds any clear answers from us. Everything is elliptical with the film seemingly told only in impressionistic bursts of sound and flashes of light lighting up the predominating shadow (all in exquisitely shot black-and-white). This has the effect of reducing Clovis Cornillac’s puzzlement to wild jags of primal emotion and confusion.

There is a vividness to some of the scenes – like where Clovis Cornillac is made a prisoner in a laboratory by a mysterious person in a contamination suit who only moves about through the air in a pulley and harness system and starts explaining things, as all the while shadowy figures outside are pressing against the plastic sheet walls. For reasons equally unclear, Clovis Cornillac also turns into a ravening beast during a couple of scenes. The film reaches an ending not dissimilar to Avatar where Clovis reaches the one tree and melds with it, overcoming the evils of technology and allowing nature to triumph and spread out through the dead surface city.

Eden Log is both fascinating and frustrating in its wilful obscurity. It doesn’t sit easily as a science-fiction film, even though the material pushes it to rest within genre confines. There are no clear explanations offered for anything or of the world we are in. I have a limited capacity for these types of films – I do not require everything to be spelled out or clear but the film should give us clues that can be stitched together or at least add to a fascinating whole. If not, then the filmmaker is merely playing a game of artistic and intellectual pretence. As such, Eden Log falls just between the irritatingly pretentious and the potentially fascinating.

(Nominee for Best Cinematography at this site’s Best of 2007 Awards).