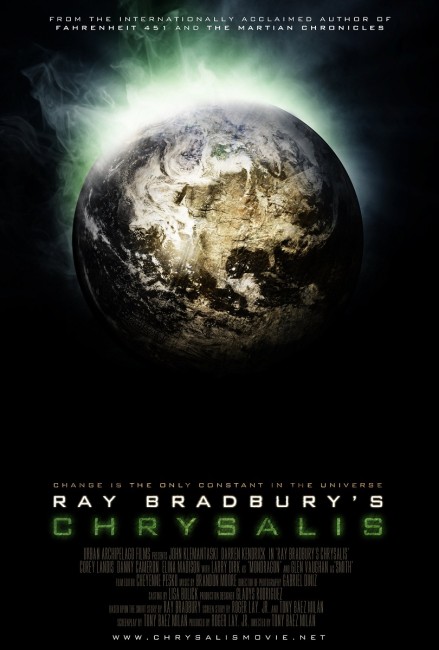 The world is collapsing and the environment is teetering on catastrophe amid plague and rioting in the streets. At the remote Y90 research station, Smith returns from a venture outside and his body starts to change until he is soon covered in a hard carapace. The other scientists realise that this is a chrysalis. There is fierce debate among them as to whether this is a new form of life or Smith should be regarded as dangerous and eliminated.

Chrysalis was a directorial debut for Tony Baez Milan. It is the only film, apart from some shorts, that Milan has directed. Elsewhere Milan has published a number of science-fiction and fantasy books in both English and Spanish language. Chrysalis should not be confused with the French Cyberpunk film Chrysalis (2007) that came out sixteen months earlier.

The film adapts Chrysalis (1946), a short story by Ray Bradbury (1920-2012), which can be found in Bradbury’s collection S is for Space (1966). Bradbury needs little introduction as one of the 20th Century’s finest and most poetic of science-fiction, fantasy and horror writers. He enjoyed considerable success with novels such as Fahrenheit 451 (1953), Dandelion Wine (1957), Something Wicked This Way Comes (1963) and short story collections like Dark Carnival (1947), The Martian Chronicles (1950), The Illustrated Man (1951), The Golden Apples of the Sun (1953), The October Country (1955) and I Sing the Body Electric (1969). Bradbury wrote several screenplays and was adapted to film and tv on a number of occasions – see below for a full list of Bradbury’s filmed works.

The film adapts a story that runs to just over 20 pages. Tony Baez Milan remains faithful to Bradbury, replicating every single incident and often lines of dialogue. The major changes are that the film starts out in the desert laboratory whereas the story has them move there. The film also situates everything in a socially collapsing and environmentally devastated future, as indicated by various cuts away to news clips, whereas for Bradbury the story was located contemporary.

The other difference is that the story already starts with Smith in the chrysalis and has the chrysalis develop over the course of several weeks, whereas the film reduces it to days and starts with Smith returning infected. Bradbury had the chrysalis caused by radiation from a laboratory experiment Smith was working on whereas here is not exactly clear how he became infected other than taking a trip outside. The film also gives us the addition of an interfering military lieutenant Mondragon. Apparently, Bradbury was consulted on the changes and approved the final product.

Bradbury’s story is a modest one about men debating what to do about a colleague who is mutating into something else. The film keeps the essence of that and some of Bradbury’s arguments. However, what we end up with is a dull and not particularly interesting work. Almost the entire film has been shot in a series of cramped, dimly lit sets that represent the laboratory. The men sit about and debate, sometimes argue about what is going on. That is most of the film. The chrysalis sits on a table, a vaguely human shape that looks like it is covered in green oatmeal.

You expect the film to either become a monster movie – this is a standard set up for it – or something science-fictional but the story never particularly goes anywhere. It is like the scenes in Alien (1979) sitting around the sickbay debating what to do about Kane after the facehugger attaches itself to him having been stretched out to become the whole of the film and without the emergence of any alien. We do get a banal eucatastrophe of an ending (invented over Bradbury) where the transformed Smith heads out and heals the polluted land.

Other Ray Bradbury screen adaptations include:– the classic atomic monster movie The Beast from 20,000 Fathoms (1953) from Bradbury’s short story The Foghorn; the alien invader classic It Came from Outer Space (1953) from his original screenplay; Francois Truffaut’s adaptation of Fahrenheit 451 (1966); the anthology The Illustrated Man (1969); the tv movie The Electric Grandmother (1980); the dreary tv mini-series The Martian Chronicles (1980) from his classic book; the screenplay for the fine Something Wicked This Way Comes (1983) from his own novel; his screenplay for the animated adaptation of the classic comic-strip Little Nemo: Adventures in Slumberland (1989); the tv anthology series The Ray Bradbury Theater (1986-92) where Bradbury adapted his own stories and hosted the series; the screenplay for the animated children’s film The Halloween Tree (1993); Stuart Gordon’s adaptation of The Wonderful Ice Cream Suit (1998) about a seemingly magical suit; A Sound of Thunder (2005) based on Bradbury’s classic time travel story; and the tv movie remake of Fahrenheit 451 (2018).