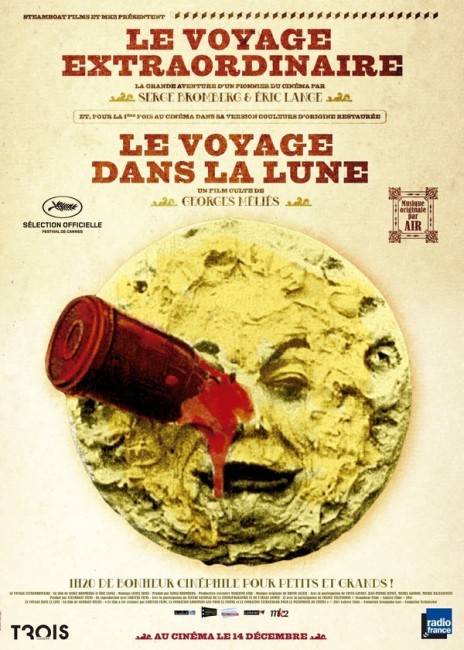 The Extraordinary Voyage is a French documentary that was made to celebrate the 150th birthday of early French filmmaker Georges Melies. It was released in conjunction with a digitally restored colour print of Melies’s most famous film A Trip to the Moon (1902). Melies gained a newfound recognition in 2011 with a number of revivals and sesquicentennial retrospectives of his work – see Melies Cinemagician (2011) for one local example – and of course his being featured as a character in Martin Scorsese’s Hugo (2011), as well as turning up not long after as a character in a French animated children’s film Jack and the Cuckoo-Clock Heart (2013).

Georges Melies (1861-1938) was one of the earliest filmmakers and is commonly identified as the father of special effects. He was present when the Lumiere Brothers showed the very first film, The Arrival of a Train at La Ciotat (1895), and immediately became captivated by the possibilities of cinema. Melies had a passion for stage magic and had earlier purchased the Theatre Robert-Houdin. He began to shoot films, initially standard depictions of real life scenes in the Lumiere Brothers style, before he accidentally discovered the idea of special effects.

Initially, these consisted of simple stop-action camera substitution effects but by the turn of the century Melies had discovered most of the basics effects techniques, including the matte, the double exposure, the construction of models and so on. He built his own studio and created sophisticated sets and costumes for his films. In a career that lasted between 1896 and 1913, Melies made over 500 films. He destroyed all of these when he was forced to declare bankruptcy and close his studio. Prints of many of these have been recovered, although around 300 of these have to all known likelihood been lost.

The Extraordinary Voyage covers most of Georges Melies’s career. It never particularly uncovers any new facts – at least none that have not been discussed elsewhere. The film does however manage to unearth a number of photographs of Melies and his team at work behind the scenes, even floor plans for his studio and audio recordings of an interview with Melies himself, talking about his work. There is discussion of Melies’s working style, covering many of the familiar aspects – he recounting the famous story of how he accidentally discovered the trick effect when his camera jammed while filming a procession and saw a carriage turn into a hearse; his construction of the world’s first film studio, with glass walls and ceiling that used daylight to light the sets, meaning that Melies could only film between 11 am and 3 pm. There is some fascinating detailing of the process whereby Melies hired a team of 300 women who would hand tint each print of his films frame by individual frame.

There is also some discussion of what caused Melies to give up making films, something that none of the tributes so far have adequately delved into, especially given that Melies so viciously repudiated his work and destroyed all the prints of his films. (This is something that Costa-Gavras aptly refers to as “a suicide with his films”). I had previously assumed that this was the arrival of World War I but The Extraordinary Voyage speculates the reasons for this are twofold – firstly that the Film’s Exhibitors Congress had dictated that French filmmakers produce far more film than Melies was previously used to and he began to flounder with the increased workload and secondly that being principally someone who dealt with magic tricks and flights of fantasy, Melies had difficulty staying fresh when other filmmakers were discovering the real world and outdoors. Here the documentary makes pointed contrast between Melies’s The Conquest of the Pole (1912) and the real world footage of Roald Amundsen’s expedition to the South Pole in 1912.

The bulk of the film focuses on the making of A Trip to the Moon, although some of Melies’s other films covered and clips screened. The filmmakers dig into the origins of A Trip to the Moon, showing illustrations from period editions of Jules Verne’s From the Earth to the Moon (1865) and H.G. Wells’s The First Men in the Moon (1901) and speculating on how they influenced Melies’s conception. The film even manages to screen footage from the tribute that appeared in the Le Voyage dans la Lune episode of the Apollo space mission tv series From the Earth to the Moon (1998) and an archival on-the-set interview with Tom Hanks who wrote the episode, where Hanks draws amusing parallels between what Melies envisioned and how much this was mirrored by the real-life Apollo Moon Landing.

The film also shows just how much of an international blockbuster that A Trip to the Moon was and discusses how stolen prints were copied and distributed by Thomas Edison and how the idea of the cinematic space journey was imitated by a number of other filmmakers, including even showing some of Segundo de Chomon’s blatant ripoff Excursion to the Moon (1908).

Interviewed throughout are a number of contemporary French filmmakers, including Jean-Pierre Jeunet, director of Delicatessen (1991), The City of Lost Children (1995) and Amelie (2001); Michel Gondry, director of Eternal Sunshine of the Spotless Mind (2004) and The Science of Sleep (2006); Michel Hazanavicius, the recent Academy Award winning director for the silent film tribute The Artist (2011); and Costa-Gavras, director of Z (1969) and The Ax (2005). All of these prove fascinatingly insightful in terms of analysing Melies’s style and artistic technique.

The last twenty minutes of the film deal with the restoration of A Trip to the Moon that premiered at the 2011 Cannes Festival. This came about after the rediscovery of a preserved colour-tinted print in Spain in 2002. This was originally digitally copied frame by frame by this film’s co-director Eric Lange, even though the technology did not exist at the time to do anything more with it. In 2010, a painstaking restoration effort was conducted by several French archivists and the US-based Technicolor Creative Services to combine this with the most complete existing black-and-white print and digitally merge the two into an approximation of the original colour tint.

The film goes into much detail about the restoration process and how it was pieced together. This, while not entirely uninteresting, is the major disappointment about The Extraordinary Voyage. It makes the entire film less a documentary about Georges Melies than a feature-length Making Of featurette for the restored film – even the detail that the documentary goes into earlier about the hand-tinting process seems only set-up to explain why this made the original restoration print such a unique discovery. The technical minutiae of the restoration process is surely likely to be of less interest to those who have come to The Extraordinary Voyage expecting a biography of Melies and makes it an effort limited more to those who have a specialty interest in film curatorship.