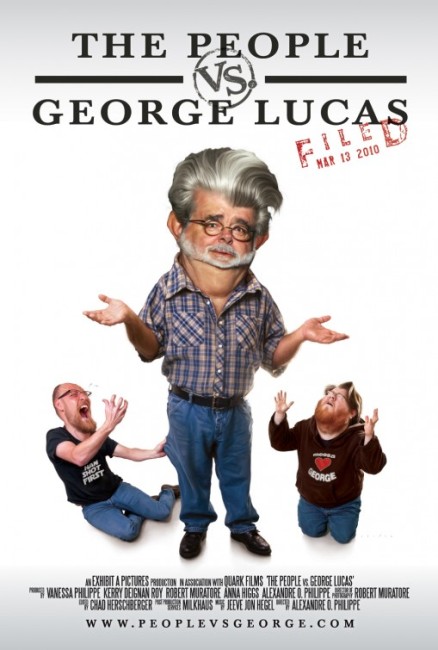 The People vs. George Lucas is a documentary about Star Wars fandom. Unlike a similar work such as Trekkies (1997) and its sequel Trekkies 2 (2004), which charted Star Trek fandom, it is not a documentary that simply chronicles the breadth, depth and peculiarities of fannish behaviour. Certainly, we do get some glimpses of Star Wars-themed slam poetry contests and cabaret acts. The film is also stocked with plentiful examples of fan-made Star Wars copies and parodies, which are often served in lieu of being able to screen any footage from the Star Wars films. Rather though, The People vs. George Lucas sets out to chart the dual-edged love and hate – what one fan refers to as ‘love-hate’ – with creator George Lucas and what has happened to the Star Wars phenomenon.

Initially, The People vs. George Lucas starts out seeming to offer a straightforward biography of George Lucas – touching on his childhood, the formative experiences that influenced him as a filmmaker, his student films and the making of American Graffiti (1973). It soon becomes apparent that this biographical material is only inserted so that the film can reference relevant parts of it when it comes to making its case later on. For example, after the massive success of Star Wars (1977) is covered, the film seems disinterested in covering anything more about Lucas’s subsequent filmmaking career – indeed, the Lucas biography aspect is abandoned fifteen minutes into the documentary. Almost nothing is mentioned of the making of The Empire Strikes Back (1980) and Return of the Jedi (1983) – and surprisingly there is no discussion at all of the reasons behind George Lucas’s decision to retire from active directing between 1977 and 1999. Raiders of the Lost Ark (1981) is mentioned but only in order to segue into a discussion on the fan film phenomenon that began with Raiders of the Lost Ark: The Adaptation (1989), and nothing at all of the second and third Indiana Jones films, nor of other George Lucas films such as THX 1138 (1971), Howard the Duck (1986), Labyrinth (1986), Willow (1988) and Radioland Murders (1994).

Principally, what The People vs. George Lucas is interested in is the way that George Lucas has handled the Star Wars phenomenon from the 1990s onwards. The first complaint the fans have is what happened in 1997 when George Lucas released the digitally re-edited version of the original trilogy with the addition of a small amount of new material and the effects scenes digitally pumped up. The principal upset with fans was the alteration of the scene in Star Wars where Han Solo shoots the bounty hunter Greedo in the Mos Eisley cantina to now make it appear that he was doing so only after Greedo attempted to shoot him first and missed.

There is considerable anger at this single change, which expands out into the essential argument that hangs over much of The People vs. George Lucas – to what extent does a creator have the right to alter and re-edit their own product after it has gone out to the public and what right do the fans have to their enjoyment of the characters they love and not have someone make essential changes after the fact? The documentary succinctly contrasts this with the statement that George Lucas made to Congress in 1988 during the debate over the colorisation of black-and-white films where he is on the record as saying that the original films should be left to be appreciated the way they are, which seems at diametric oppose to the stance that he has taken in regard to his own films.

This argument is compounded by the fact that George Lucas has mandated that his re-edits are now the only official versions of the original Star Wars films available in dvd format. The originals are the versions of the films that most of the fans love (this author included), not the digital re-edits, and there is an intense degree of frustration we see expressed regarding Lucas’s refusal to allow the original versions to be re-released.

There is also some questioning of the official statement from Lucasfilm in response to fan requests that the original films become available, claiming that they are unable to do so because the masters were damaged during the process of altering them for the digital cut. Filmmaker Mark A. Altman pours scorn on this, saying that every archivist always makes a dupe of the master for editing usage rather than cuts the original. Examples are pointed to of other films that have existed in multiple cuts such as Blade Runner (1982), E.T. – The Extra-Terrestrial (1982) and Brazil (1985) where all the different forms the film exists in have been issued on collector’s editions. As one fan asks: “What better way to show confidence in the new edits [than to allow both to be seen alongside]?” Later parts of the film discuss the infamous The Star Wars Holiday Special (1978) and George Lucas’s refusal to allow it to ever see the light of day again.

There is much focus on the disappointment of Star Wars Episode I: The Phantom Menace (1999). The majority of the fan’s ire focuses around two principal points – the reduction of The Force from a mystical power for good and evil to ‘midi-chlorians’, something that is now no more than molecules in a Jedi’s bloodstream, and in particular the irritating comic-relief character of Jar-Jar Binks. One fan makes the interesting argument that Jar-Jar Binks essentially plays on old racist Negro caricatures. In its determination to give equal time to both sides of each argument, The People vs. George Lucas also features a number of kids who have grown up with both trilogies and regard the saga as part of a single continuum and state that they love the character of Jar-Jar Binks. This leads many of the fans who grew up with the original trilogy to question what it was that attracted them to the original films and wonder if it was no more than a child-like simplicity.

The documentary also tackles a number of other contentious issues within Star Wars fandom. There is some time spent dealing with the never-ending mountain of merchandising product that Lucasfilm has released in the Star Wars name. Here the film covers the origins of this, talks to fans who express annoyance with the endless supply of it, while also pulling back to give equal time to those who point out that it is ultimately down to individual choice whether people buy it or not. There is even discussion of download sites where one can access the unedited original trilogy and of the fan edits made of the prequels and whether people should be allowed to make their own versions of the films that cut out undesirable characters such as Jar-Jar Binks. There is also a good deal of footage from the various fan films. Some of these even cast George Lucas as a character and take him to task – particularly amusing is a parody of Misery (1990) where George Lucas is tied up in a bed by a fan who forces him to write her own ending to the series.

The film gets a surprising number of interviewees in, travelling the world from England to Japan and Spain. A few well-known names are included, including brief interviews with Dave Prowse, aka the body of Darth Vader, Star Wars producer Gary Kurtz, Neil Gaiman and science-fiction writer David Brin, author of the original The Postman (1997) novel. One interviewee is filmmaker Francis Ford Coppola, George Lucas’s mentor back in the early days, who is surprisingly critical of what has happened to the Star Wars phenomenon, voicing the opinion that the success of Star Wars ruined George Lucas as a creative filmmaker.

There is also some discussion of the phrase “George Lucas raped my childhood.” This emerged out of an episode of South Park (1997– ) used in regard to the big letdown that was Indiana Jones and the Kingdom of the Crystal Skull (2008). There is some debate as to whether the term rape is an overstatement with the majority tending towards the view that is was more akin to consensual sex. The film ends on an upbeat note with a number of fans thanking George Lucas for the enjoyment they have received so far and wishing that he would find a way to return to what it is that they love.

Director Alexandre O. Philippe mostly specialises in documentaries about fandom. He has also made Earthlings: Ugly Bags of Mostly Water (2004) about Star Trek fandom; The Life and Times of Paul the Psychic Octopus (2012) about the octopus that makes accurate predictions about the outcome of the World Cup; Doc of the Dead (2014) about zombie fandom; 78/52 (2017) about the making of the Psycho (1960) shower scene; Memory: The Origins of Alien (2019); Leap of Faith: William Friedkin on The Exorcist (2019); and The Taking (2021) about the use of Monument Valley in Westerns.