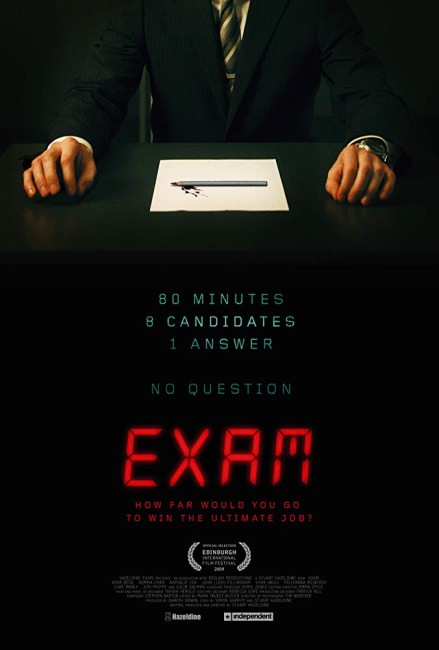 A group of eight people, four men and four women all of differing nationalities, are chosen as applicants for a job position with a corporation. They are placed into a room to undergo an exam. There they are given eighty minutes in which they must work out what the question is. They are given several rules – that they must not soil the blank pieces of paper that each is given, even though these only lists the candidate’s number, and must not attempt to communicate with the invigilator watching on camera or the armed security guard who is left in the room. As the countdown begins, a desperate search begins to find where in the room the question is hidden or what special lighting or chemical treatments available to them might reveal it. As all attempts run up a blank, they turn to brutal fighting amongst themselves as members of the group seek to eliminate others from the competition or torture those present they believe to be plants or have information.

British-born Stuart Hazeldine is a potentially interesting screenwriter. For a time, he was listed as the writer of several hot properties for Alex Proyas that included a big-screen adaptation of John Christopher The Tripods books and the long-planned adaptation of Paradise Lost (1668), which subsequently went through several other directors before being canned, as well as an historical film Agincourt. None of these ever came to pass and the only screen credit that Stuart Hazeldine had at this point was the first tv mini-series version of Riverworld (2003), a thorough disappointment that made an abortion out of Philip Jose Farmer’s fine book series. It may well say something about the quality of his other scripts or the projects he was attached to that Hazeldine was able to attract the budget to make his directorial debut with Exam on the basis of this single screen credit.

Exam is a fascinating conceptual film. It has been mounted with a clear economy ie. the entire film takes place on a single set and with an absolute minimum of props. Almost certainly, the film was pitched in terms of being a copy of Saw (2004), as per films like Die (2010), Vile (2011) and Would You Rather (2012), in which people are locked in a room and given a puzzle to solve to save their lives and/or must undergo torturous extremes in order to survive. In reality, Exam emerges more akin to Cube (1997) and the series of puzzlebox films that took their influence from it.

As in Cube, we have a cross-section of everyday characters trapped inside some type of room (or labyrinth of rooms in Cube) and forced to piece together the great existential puzzle of why they are there. Exam has moments where it could sit in the horror genre with a stretch, although it lacks any of the torturous extremes that Saw and particularly its sequels focused on. It could with a stretch be a science-fiction film – especially with its end revelation where we get the impression that we are in a near-future setting where things have occurred (a worldwide plague) that would place the film into the science-fictional.

Everything has been designed with a fascinating existential blankness – the room is featureless but for a set of tables and chairs just like a schoolroom. The pieces of paper they are given are blank but for the designated number of the candidate. None of the candidates even have names – they simply label themselves either by hair colour or by race. We are told nothing about the job, the corporation they are applying to or the world outside – only a few tantalising clues that start to sneak in towards the end of the film. In other words, what we have seems designed as the equivalent of an existential empty room – one where the candidates’ sole designed task is to work out what the question they are being asked is.

As such, the film is as much about the puzzle of what the question is as it is a character study in what it brings out among the contestants – in particular, the way we see Luke Mably’s crude and callous self-centredness and ruthless preparedness to get others evicted in order to win. Exam becomes rather enjoyable with some of the twists the plot introduces and at watching the characters racking their brains for solutions or willing to travel to torturous extremes in order to extract information.

Particularly tense are some of the scenes with Jimi Mistry torturing Adar Beck with a series of paper cuts, or where Luke Mably falls ill and the debate over what to do about his medicine. The climactic revelation of what is going on is a surprise that one never anticipated – although does leave one wondering what sane corporation could possibly ever get away with creating a situation that passively sits back and allows people to torture and kill one another as part of a job selection process.

Stuart Hazeldine next directed The Shack (2017) in which a man is summoned to a meeting with God.