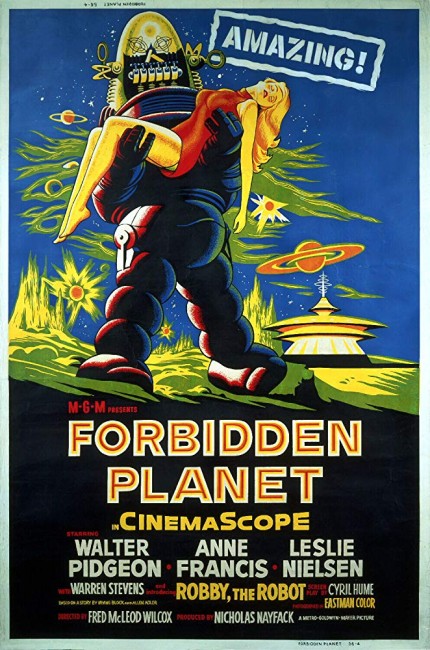 Earth interplanetary cruiser C57D travels to the planet Altair IV to check up on a research team. They are warned from orbit to leave but instead choose to land. They meet archaeologist Dr Edward Morbius and his beautiful daughter Altaira, the only survivors of the research team. Dr Morbius shows them the marvels of the Krell, the race that once inhabited the planet – colossal energy wells stretching to the planet’s core and a mind-boosting device that has enabled him to understand their devices and build an all-purpose robot Robby as his servant. Altaira, who has never met another man, proves temptation too hard to resist for the crewmen who try to educate her as to what a kiss is. At night, an invisible energy field enters the ship, destroying equipment and killing men. The crewmen realise that this is a monster from the Krell’s ids – that the Krell tried to suppress their base desires but instead the suppressed emotions took energy form and killed them off. Now, Morbius’s subconscious, angry at the attentions of the Earthmen towards his daughter, has created his own id monster to destroy them.

Forbidden Planet is unquestionably one of the all-time science-fiction classics. Many regard it as the best science-fiction film to come out of the 1950s. Personally, I think that is a status that belongs to either Invasion of the Body Snatchers (1956) or The Incredible Shrinking Man (1957) – but Forbidden Planet would certainly be up there in the top handful of the era’s films. Many people have enormously fond memories of the film and Robby the Robot has gone onto become an enduring fan icon. If there were ever a vote for Best 1950s Science-Fiction Film, Forbidden Planet would almost certainly emerge as the popular favourite.

The reasons for Forbidden Planet‘s success are much the same ones that made 2001: A Space Odyssey (1968) and Star Wars (1977) the undisputed science-fiction classics of their respective generations – and that is the unbridled sense of wonder that each offers. What can be seen in each of these films is how much they stand head and shoulders above their contemporaries in terms of the mind-stretching distance of the places they are able to take audiences up and away from the here and now.

Forbidden Planet is maybe one of the purest cinematic injections of the much abused term ‘sense of wonder’. It seems almost entirely designed to keep producing things that dwarf humanity and its achievements – we are shown colossal caverns of power grids descending all the way to the centre of the planet with giant Van der Graaf accelerators sliding up and down them like elevators; there is a gauge that registers energy output on geometric scale of increase (at the climax we see every single one of these flashing); there is a Krell brain boosting device where a genius-level human only registers as an idiot child on the Krell level.

Few films (at least of this era) devote so much in the way of special effects just to establishing background. Forbidden Planet comes filled with its beautiful shots of multiple moons in purple skies or of the saucer passing across an eclipse of the sun. They are scenes that have a beauty that goes beyond the merely functional carrying of the plot. While one might debate about whether Forbidden Planet is the best, it is certainly the most gorgeously produced of all 1950s science-fiction films.

While 1950s science-fiction is frequently criticised for its lack of intellectual content, Forbidden Planet is one example to the contrary. It comes with a plot that could have been taken out of any copy of Amazing Stories or Astounding in the previous decade. It is clear that the authors have read the pulp magazines of the 1940s. There is a love of science-fictional gadgetry and wondrous technology – brain-boosting devices, moving sculptures, forcefields, rayguns, the planetary energy wells and of course Robby the Robot whom one expects could quote Asimov’s Three Laws of Robotics at the drop of a mechanical hat. Surprisingly for a 1950s science-fiction film, the science is even credible. The one incongruous bit about the gadgetry is seeing the Earthmen travelling in a flying saucer. Of course, this was Forbidden Planet‘s clear attempt to capitalize on the flying saucer fad of the 1950s, although one can almost guarantee that this is the only 1950s science-fiction film where Earthmen are piloting the saucer rather than it being manned by alien invaders.

A great deal has been made of the fact that Forbidden Planet is essentially William Shakespeare’s The Tempest (1611) in a science-fiction setting. It is this that transforms Forbidden Planet into far more than a mere pulp science-fiction story. Shakespeare’s The Tempest is set on a Mediterranean island where the magician Prospero lives in exile from Milan, along with his daughter Miranda, the tamed spirit Ariel and the bestial Caliban, the original lord of the island. Their idyll is upset by the arrival of various shipwrecked Milanese dignitaries, one of whom falls in love with Miranda. Forbidden Planet transplants the play into an intergalactic setting and finds science-fictional equivalents for the Shakespearean characters – the magician Prospero becomes the archaeologist Dr Morbius; Miranda becomes Altaira; Caliban becomes the Id monster; the Milanese dignitaries become the Earthmen; and, in a transposition that it is unlikely that Shakespeare in his wildest dreams could ever have imagined, the ethereal Ariel is now played by a robot.

What is even more striking in comparison to The Tempest is the subtext the film places on the original – Caliban is transformed from the original inhabitant of the island into an amorphous ‘monster from the id’ made manifest, a direct nod to the era’s fad for Freudian psychology. There is also the fact that Morbius/Prospero, despite being given an ostensible reason about wanting to protect the Krell discoveries, can be clearly read as having an unstated jealousy over the sexual attentions forced on his daughter by the earthmen. It is an incredible underscoring to a film, especially to find when one comes to Forbidden Planet as a film whose legend lies in fandom more for its successful display of pulp content.

Perhaps where Forbidden Planet conceptually falters – and one is reluctant to call it a failing – is the failing of all 1950s science-fiction films. And that is that any sense of unfettering the human imagination and venturing out beyond the limits of the here and now is undercut by a pessimism. Other 1950s films like Riders to the Stars (1954), The Quatermass Xperiment/The Creeping Unknown (1955) and The Angry Red Planet (1959) come undercut with the sense that any venture out into other worlds comes at too high a human cost or is entering into a realm that humanity is better off not venturing into. In the era’s journeys into space, almost any imaginative venture beyond the Earth is overshadowed by a navel-gazing fascination with our imminent self-destruction. The likes of Rocketship X-M (1950), This Island Earth (1955) (the one other film of the era beside Forbidden Planet that makes an extraordinary imaginative leap out beyond the Earth) and First Spaceship on Venus (1959) have humanity venturing to other worlds only to find there another race that has befallen its own hubris and destroyed itself. At contrast to say 2001, which ventured way beyond Earth and finally let its astronaut travel out and enter into another entire realm of being, or even Star Trek (1966-9), which has humanity venturing beyond to proselytise American democracy as the best of all possible ways of life, Forbidden Planet offers up the most mind-expanding scale of conception of any 1950s science-fiction film but then falls away and seems to say that humanity cannot escape its baser tendencies towards violence and self-destruction.

The acting is good, including a young Leslie Nielsen in the lead and suitably dignified support from Walter Pidgeon. Anne Francis has a wonderfully sprightly charm and open-eyed innocence. The scenes between her and Leslie Nielsen have a drolly amusing flirtatiousness. The rest of the crew seem like the standard-issue GI’s from a WWII film. Interestingly, the central three earthmen seem forerunners of the central triptych of characters that filled Star Trek – Leslie Nielsen is clearly the Captain Kirk of the operation even down to the womanising, while the character of the coolly logical ‘Doc’ Ostrow is akin to Spock, and Jack Kelly’s Lieutenant Farman could be a stand-in for Dr McCoy. When you think about it, Forbidden Planet could easily have been an episode of Star Trek with only minimal rewriting.

The Invisible Boy (1957) was promoted as a sequel but is only a juvenile featuring Robby the Robot in the present-day. Robby the Robot has made numerous guest appearances in episodes of The Twilight Zone, The Addams Family, The Man from U.N.C.L.E., Lost in Space and Colombo and films like Gremlins (1984), Cherry 2000 (1987), Earth Girls Are Easy (1989) and Looney Tunes: Back in Action (2003), even gets a line of song devoted to it in the opening credits of The Rocky Horror Picture Show (1975).

Surprisingly, given its popularity, Forbidden Planet is one 1950s science-fiction film to have never been remade. There have been plans in the 1990s to conduct a remake, which would have been directed by the late makeup effects artist Stan Winston, although this never emerged. During the 00s, a remake has been announced with a script by J. Michael Straczynski of fame. The only modern revival has been the stage musical Return to the Forbidden Planet (1989), an amusingly tongue-in-cheek version that co-mingles Shakespeare and science-fiction and bills itself as “Shakespeare’s lost rock’n’roll masterpiece”.