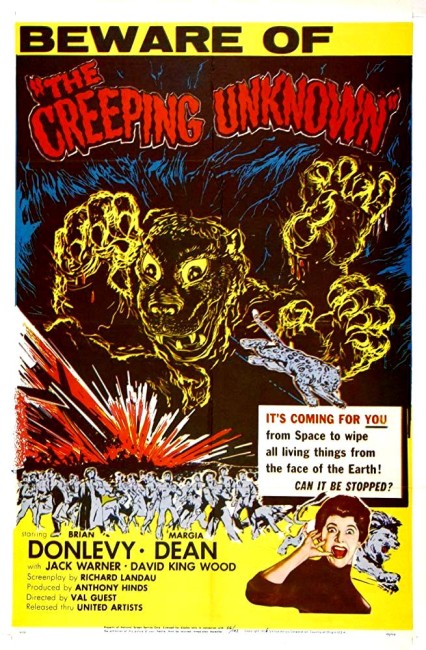 aka The Creeping Unknown

The experimental rocketship Q1 crashes in rural England. Its’ creator Professor Bernard Quatermass, who recklessly sent the rocket up without official sanction, rushes to the scene. Only a single surviving astronaut Victor Carroon is found, the other two having inexplicably vanished. As Quatermass tries to work out what happened, the strangely uncommunicative Carroon is placed in hospital. Carroon’s wife attempts to rescue him but this goes wrong. After he touches a cactus, Carroon absorbs it into his body. Fleeing across London, Carroon starts mutating into a monster. Quatermass realises that Carroon has been taken over by an alien energy being that has no form and absorbs everything it touches into its mass. Soon the monster grows to giant-size.

Nigel Kneale proved a popular and regular science-fiction writer over the next two decades (see below for a list of his other works). He became known for his audacious and intriguing science-fiction ideas – like The Creature/The Abominable Snowman (1955) where the Yeti turns out to be a creature of surprising humanity; Quatermass and the Pit, which deals in a dazzling array of ideas combining race memory, The Devil, latent psi powers and Martian visitors; The Quatermass Conclusion where ancient megaliths are revealed to be alien harvesting portals; his tv plays The Road (1963) and The Stone Tape (1972), which offer scientific explanations for hauntings; and Beasts (1976), an anthology of monster stories where no monsters were ever seen.

The Quatermass Xperiment was a genre cornerstone in a number of crucial areas. It was one of the earliest productions made by Hammer Films – and their first international success. Two years later, Hammer would break into colour and have massive success with The Curse of Frankenstein (1957) and Dracula/The Horror of Dracula (1958), after which they would become an industry unto themselves, revamping the major horror classics and creating a substantial and prolific body of genre work. Equally importantly, The Quatermass Xperiment was – with the exception of the cheesy Devil Girl from Mars (1954) – the first British film to venture into the theme of alien invasion that was running riot across the Atlantic in the likes of The Thing from Another World (1951), It Came from Outer Space (1953), The War of the Worlds (1953) and numerous imitators.

Nigel Kneale’s theme of the mutating astronaut was also copied in a number of subsequent films – in the likes of First Man Into Space (1959), The Hideous Sun Demon (1959), The Crawling Hand (1963) and many episodes of Doctor Who (1963-89), most notably The Seeds of Doom (1976), as well as several years later by The Incredible Melting Man (1977) and a little film called Alien (1979). Hammer’s X the Unknown (1956) started out as an attempt to make a sequel to The Quatermass Xperiment but ended up being an original work when Nigel Kneale refused the use of the character without his permission. (Hammer had dropped the E in ‘experiment’ to make a virtue out of the film’s being slapped with an X certificate by the British censor and this and made similar emphasis of the letter X in the title). Many subsequent British alien invader films from the era also copied The Quatermass Xperiment‘s gimmick of importing an American actor – here Brian Donlevy – to give the films marquee name value that would carry them across the Atlantic.

The Quatermass Xperiment does a good job of expanding the teleplay out with a bigger budget. All that exists of the original live telecasts of The Quatermass Experiment today is two episodes. Up until the 2005 DVD release of the tv plays, there had been nothing to compare the film to with the exception of Nigel Kneale’s script, which he published in book form in 1959. I had been unable to find any reviews from the time the film came out comparing it and the tv play written by people who had seen either version. Some fan memories have insisted that the tv version was the superior but it is hard to be sure if this is based on real comparison or that simply the unavailability of the original has amplified its reputation. The film naturally brings the virtue of greater budget, allowing such things as exterior location shots and effects. It also allows the scale of the story to be expanded – the teleplay climaxed with Quatermass talking to the monster and convincing the devoured astronauts inside to assert themselves, while the film mounts a much more pyrotechnic climax with Quatermass incinerating the creature by electrifying workman’s scaffolds in Westminster Abbey.

The most prominent difference between the two versions is the character of Professor Quatermass. In the various series and other film productions, Quatermass is a variation of the commanding British Man of Science and Reason as incarnated in the likes of Peter Cushing’s Van Helsing in the Hammer Dracula movies and the title character in Doctor Who, a character who wields science with assured brilliance and shines the light of reason upon superstition. In The Quatermass Xperiment, Quatermass is miscast with Brian Donlevy who gives a snapping and unlikable bulldog of a performance. In the film version, the character has been explicitly changed to make Quatermass a misguided hero, driven by his own ego, barking orders and domineering subordinates. He is outfitted with arrogant lines like: “If the whole waited for official sanction, I’d be standing still. You took too long, I make my own decisions,” and later consoles the astronaut Carroon’s wife with thoroughly self-righteous lack of pity: “Some of us have a mission. You should be proud to have a husband who is prepared to risk his life for the whole world.”

The Quatermass Xperiment lacks the complexity of ideas found in Nigel Kneale’s later works but it does work with a spooky atmosphere. Val Guest creates some beautifully eerie, unsettling scenes, leaving us wondering just why Richard Wordsworth is hiding his hand in his coat pocket. Wordsworth gives a wonderfully pained performance and Val Guest does an excellent job of contrasting his silent mime with the reactions of the people around him. There is an encounter with a little girl that echoes with resonances of the monster’s meeting the little girl in the Boris Karloff Frankenstein (1931). Of course, this seems ridiculously tame in regard to the much vaunted X certificate, with no attacks being seen, merely a mutated hand. Both Hammer’s The Curse of Frankenstein and The Horror of Dracula went into much more extreme territory for the time than anything here.

Nigel Kneale’s other teleplays were:– 1984 (1954) from the George Orwell novel; The Creature (1955) about the Yeti; The Road (1963) about a haunting that may in fact be an example of time travel; The Year of the Sex Olympics (1970) about a future where the populace is pacified by televised sexual competitions; Wine of India (1970) about a future society that enforces euthanasia; The Stone Tape (1972) about the investigation of ghostly phenomena; the aforementioned tv series Beasts (1976); the comedy series Kinvig (1981) about an SF fans who has an encounter with aliens; and the ghost story tv movie The Woman in Black (1989). Kneale’s film scripts were Quatermass 2/The Enemy from Space (1957), The Abominable Snowman (1957) adapted from The Creature, The First Men in the Moon (1964) from the H.G. Wells novel, Hammer’s The Witches/The Devil’s Own (1966), Quatermass and the Pit (1967), and uncredited work on Halloween III: Season of the Witch (1982).

Val Guest’s other genre films include:– the comedy Mr Drake’s Duck (1951) about a duck that lays radioactive eggs; Hammer’s Nigel Kneale adaptations Quatermass 2/The Enemy from Space (1957) and The Abominable Snowman (1957); The Full Treatment (1960) about a racing driver suffering psychopathic impulses; Life is a Circus (1960), a comedy involving a genie; the end of the world film The Day the Earth Caught Fire (1961); some scenes of Casino Royale (1967); the sf pop music film Toomorrow (1970); and the prehistoric drama When Dinosaurs Ruled the Earth (1970).