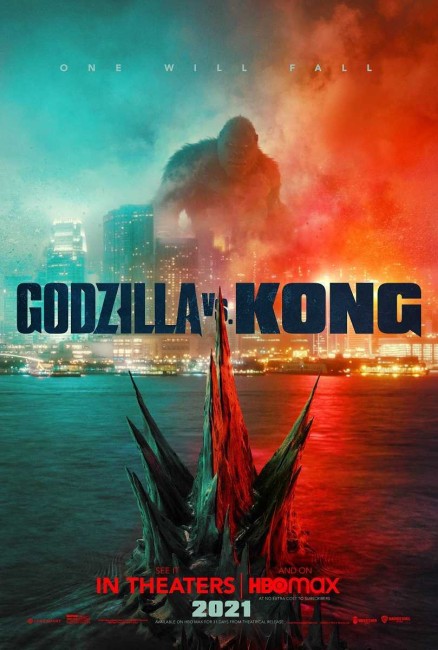 Godzilla abruptly attacks an Apex Cybernetics facility in Pensacola, Florida. Bernie Hayes, who runs a podcast devoted to giant monsters, has gone undercover in the plant and believes that Godzilla is after something concealed in Apex’s lower levels. Apex CEO Walter Simmons approaches Nathan Lind, the author of a book about how the Earth has a hollow core, offering to use some of his advanced tech to back an expedition to find the entrance to the Hollow Earth. Lind goes to Monarch scientist Ilene Andrews who is studying Kong in an artificial simulation of Skull Island. He proposes the idea of freeing Kong and allowing Kong’s ancestral memory to draw them to the entrance to the Hollow Earth while they follow in an Apex vehicle designed to deal with the reversal of gravity. However, the path there leads them through Godzilla’s territory and rouses Godzilla’s natural instinct to battle Kong for supremacy as the apex predator. Meanwhile, Madison Russell, a follower of Bernie’s podcast, and her friend Josh Valentine join forces with Bernie to break into Apex where they discover plans to launch Mecha-Godzilla, a giant robot copy of Godzilla.

This was the fourth film in Warner Brothers’ Monsterverse. This started with their surprisingly good revival of Godzilla (2014). In an effort to compete with Marvel and the massive success of the MCU on screens throughout the 2010s, Warners next made Kong: Skull Island (2017), which revived Kong in a reinterpretation that removed Fay Wray and the Empire State Building from the mix and came layered with references that led in to the shared continuity of the Monsterverse. Next came Godzilla, King of the Monsters (2019), which brought Godzilla back and pitted it against other monsters from the Toho universe – Mothra and Ghidorah/Ghidrah. (See below for the other King Kong and Godzilla films).

Godzilla vs. Kong remakes (or perhaps more correctly reimagines) Toho’s King Kong Vs. Godzilla (1962) where in an amazing copyright leasing coup the Japanese managed to obtain the rights to RKO’s King Kong (1933) and pitted the two together. Toho subsequently spun Kong out in his own adventure King Kong Escapes (1967), which pitted him against a giant robot copy Mecha-Kong. There’s no Mecha-Kong here but Kong and Godzilla both battle Mecha-Godzilla, another regular monster villain/hero from the Tohoverse that first appeared in Godzilla vs the Cosmic Monster (1974) and has made various subsequent reappearances where it has varied between being a giant robot, a mecha and even an artificially intelligent city.

Adam Wingard feels an odd fit for such a massively budgeted, effects-heavy film like Godzilla vs. Kong. While You’re Next and The Guest were made on medium budgets and received respectable theatrical releases, Wingard at the same time was making scrappy micro-budgeted films and Found Footage efforts as part of the The ABCs of Death (2012), V/H/S (2012) and V/H/S/2 (2013) compilations – he even produced a trilogy of Found Footage shorts with the V/H/S films.

Godzilla vs. Kong emerges enjoyably. It is easily the best of the Monsterverse sequels – my preference still goes to the 2014 Godzilla but it easily outpaces Kong: Skull Island, which I had reasonably enjoyed at the time but now has faded in memory as fairly forgettable, and the indifferent Godzilla, King of the Monsters.

What makes Godzilla vs. Kong fun is the monster and mass destruction scenes. The various visual effects companies go completely to town on these. Stupendous scenes of Kong and Godzilla smashing up entire battleships and aircraft carriers, even Kong crushing fighter planes in his paw, or of the knockdown battle in Hong Kong, which is rendered as far more beautifully lit up in neon than the real thing ever is. Like the various Transformers sequels and some of Roland Emmerich’s more recent films, the effects become so epic in size that they start to pass beyond the capacity to visually comprehend them.

Unlike King of the Monsters’ Michael Dougherty, Adam Wingard realises that the key to making giant monsters work is being able to anthropomorphise them rather than simply throwing colossal effects sequences at an audience. The greatest successes that Godzilla vs. Kong has in all its small moments – the expressions on Kong’s face or images like its’ hand trailing in the wash as its unconscious body is transported by ship. The film plays all the violin strings it can in terms of the relationship with the young deafmute girl (Kaylie Hottle) and seeing the two of them communicating by sign language or simply she reaching up to touch its giant fingertip.

The main issue I had with Godzilla vs. Kong is that it has a script that is written down around the level of a cartoon. In fact, this may be insulting to cartoons. I’d maybe compare it to the ridiculousness of Kong, King of Atlantis (2005) where Kong is made a king by the lizard people of Atlantis and comes with songs. Or perhaps even more so King Kong Lives (1986) with its giant ape pacemaker transplant operation – we do get a scene that is even more ridiculous here where one of the vehicles, which just happens to have “enough power output to keep Las Vegas going for a week”, is used to defibrillate a downed Kong. I perhaps don’t want to be toooo hard on the film as similar absurdities can be found in the 1970s Toho films (less so the ones of the 1990s and beyond), nevertheless this may be the single most ridiculous scripts I have ever seen in some 30+ years of writing about films.

Where to begin with the script’s absurdities? One of the biggest of these is the notion of a Hollow Earth, which was seriously put forward in the 19th Century until science rendered the idea nonsensical. Geologically speaking, gravity and the weight of the Earth causes matter to condense the further you go down until it becomes liquid – Earth has a molten core that starts about 1800 miles beneath the Earth’s crust where the temperature gets to be around 5000 degrees C. This renders any notion of the Earth having a hollowed out core that is its own world nonsensical – gravity would just cause the outer crust to collapse inward and fill up the space akin to a balloon falling in on itself once the air is released. What gets me is when we arrive at the Earth’s core is the fact that there seems to be nothing supporting the outer shell, just some handwave notion of ‘reversed gravity’. Not to mention that when we get to the Hollow Earth, you keep wondering where all the bright daylight is coming from? Shouldn’t the area be in complete darkness unless there is some kind of internal sun?

The script also tosses around terms like ‘ancestral memory’ to explain Kong’s homing instinct towards the North Pole and its entrance to the underground. (I won’t go into that one too much as scientists themselves don’t have too much of a clue about how ancestral memory works). I also had to laugh at the idea of Godzilla’s desire to be an apex predator somehow giving him the ability to hone in on and attack a cybernetics facility, despite the fact the actual robot (which hadn’t been activated at that point) was half a world away.

There are other absurd plot devices – Kong returns to the Hollow Earth and finds a throne room waiting for him along with a giant axe that gets powered up by the seemingly magic energy that can only be found at the Hollow Earth (where of course said axe becomes instrumental in his fight against Godzilla and Mecha-Godzilla). Godzilla gets perturbed by this and distracts from his rampage through Hong Kong to burn a hole in the ground through to the Hollow Earth with his breath – there is no indication how deep the Hollow Earth, although it would surely further down than all the mineshafts, the deepest of which go down between 1-2.4 miles, which is still quite a distance for Godzilla to have to burn with his breath.

I have never encountered a plot so dependent on pieces of ridiculousness, including:- a holodeck recreation of Skull Island where Kong is imprisoned; a cute kid who has somehow managed to teach Kong sign language without any of the people who keep close observation on Kong noticing her doing so; a secret hyperloop tunnel between Pensacola and Hong Kong having been built that nobody seems to know about. Not to mention the employment of one of Ghidorah’s skulls as a ‘DNA computer’ (whatever that might mean), which is really only an excuse for it to rebel and take control of Mecha-Godzilla and become a standard Machine Amok in time for the climactic bout.

It is also a film badly written in terms of its characters. Millie Bobby Brown from King of the Monsters is reduced to running around with a wacky conspiracy theorist (Brian Tyree Henry giving the sort of performance that Anthony Anderson used to specialise in – you keep wondering how such a clueless idiot would manage to hold down a job at a hi-tech company). He also has a laughable piece of character background where he explains he keeps a hip flask of whiskey in a shoulder holster in memory of his late wife. Millie is also paired with Julian Dennison, the kid who stole the show in Deadpool 2 (2018), as a teenage nerd. Dennison’s big scene is tossing out a bunch of comic lines where he is being required to hack the password to the Mecha-Godzilla control system before deciding the solution to deactivating it is throwing the contents of Henry’s hip flask across the control panel.

The other King Kong films are:-

(Winner for Best Special Effects at this site’s Best of 2021 Awards).