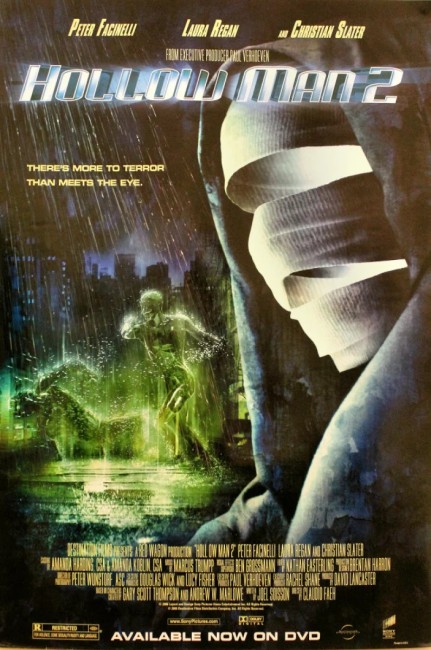 Seattle police Frank Turner and his partner Lisa Martinez are assigned to investigate after scientist Devin Villiers is found murdered under mysterious circumstances at a society function. The investigation is quickly taken over by the military and Turner and Martinez are reassigned to guard duty at the home of Villiers’ colleague Dr Maggie Dalton. While they are there, someone tries to break in to get at Maggie, during which Martinez is killed. Frank and Maggie flee from the attacker. She explains that they were part of a team working to revive a previously defunct project to create an invisible man. However, their experimental subject, soldier Michael Griffin, was turned mad by the process. Griffin is now trying to obtain from her the antidote known as The Buffer, which he needs a constant supply of in order to hold at bay the side-effects of the process. As they flee, Frank and Maggie are hunted by both the invisible Griffin and by the duplicitous military who have listed them as wanted fugitives.

Paul Verhoeven’s Hollow Man (2000) was a minor success when it came out. As a film, it was founded on the simple notion of revamping the old invisible man tale with modern CGI effects. The effects proved dazzling but underneath these the story seemed overtaken by Paul Verhoeven’s perpetual tendencies towards excess sex and violence.

Hollow Man II is a sequel that has been made directly for dvd. Hollow Man was not a particularly great film but one had a sinking feeling about Hollow Man II from the moment they saw Joel Soisson’s name on the credits. Joel Soisson, usually under the banner of Neo Motion Pictures, has variously written or produced and occasionally directed a mountain of cheaply-made sequels to other people’s genre films including A Nightmare on Elm Street Part II: Freddy’s Revenge (1985), Maniac Cop 3: Badge of Silence (1992), Highlander: Endgame (2000), Mimic 2 (2001), Piranha 3DD (2012) and various of the latter sequels in the Hellraiser and Children of the Corn series. Soisson had also been responsible for creating/producing three entire ongoing series of his own with The Prophecy (1995) and sequels, Dracula 2000 (2000) and sequels, and Pulse (2006) and sequels. To be fair, some of Joel Soisson’s films are not too bad – he did produce Bill and Ted’s Excellent Adventure (1989), the first The Prophecy and the fine Dean R. Koontz adaptation Phantoms (1998).

However, there is not much to Hollow Man II, least of all as a story. Hollow Man at least had its dramatic focus on a group of scientists trying to find a maddened invisible man who was trying to kill them. By contrast, Hollow Man II descends into a dreary chase movie interspersed with random killings. The plot is contrived in its reasons to get Peter Facinelli and Laura Regan on the run from both the law and the invisible man.

Hollow Man concerned an invisible madman and Hollow Man II seems to take this even further – there are times it feels like it could almost be on the verge of becoming an invisible man slasher film. Claudio Faeh’s direction broods with horror movie music and looming suspense sequences. There is even a gratuitously silly slasher-type sequence with the invisible man lurking around a teenage couple (Nolan Funk and Zara Taylor) as they fool around and take their clothes off in front of a video camera. Other than that though, there is not even the gratuitous sadism and voyeurism that Paul Verhoeven’s set-pieces had.

One of the biggest disappointments about Hollow Man II is its failure to provide any adequate invisible man effects. The film seems to avoid most opportunities to show any invisibility effects – all we get are a few shots of the invisible Griffin splashing water on himself, bleeding or picking objects up. The only sequence of any note is the climax involving two invisible men fighting while outlined in the rain. The biggest cheat here is when it comes to replicating the novel effects sequence that became a talking point about Hollow Man – of seeing an invisible man recreated from the skeleton out to the epidermis. We get a few brief glimpses of such effects here … but the big cheat is that Hollow Man II has taken all of these from the original film. There are no original transformation sequences at all.

The producers have made the point of casting the film with young good-looking leads. The downside of this is that hero Peter Facinelli looks barely old enough to be out of college let alone a seasoned detective. Laura Regan is supposed to be a brilliant scientist but once into the action she becomes neurotic and fades anonymously into the scenery.

The invisible man is played by Christian Slater who was once a name of note but seems to be slumming it this side of the 00s – see also Alone in the Dark (2005). Slater has about five minutes screen time and for the rest of the film gets to literally phone in his performance. In an overly tired gag that has been done by just about every invisible man film, Christian Slater’s hero is named Griffin after the first ever invisible man in H.G. Wells’ novel The Invisible Man (1897).