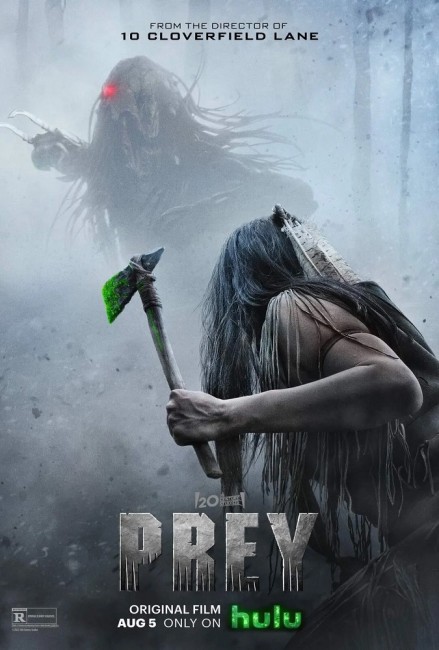 Naru is the member of a Comanche tribe on the Northern Great Plains in 1719. She is determined to be a hunter but is constantly dismissed by the other male hunters because she is a woman. Naru sees something come down in the sky. As members of the tribe are killed, the other hunters think they were killed by a mountain lion. Naru believes otherwise and then sees an invisible Predator kill a bear. She heads out on her own to track the Predator. As the other warriors are eliminated, she is forced to take the Predator on with her bare hands and wits.

Prey was the seventh of the Predator films. The series began with the Arnold Schwarzenegger-starring Predator (1987), which was a reasonable hit back in its day. This was followed by the urban-set sequel Predator 2 (1990) starring Danny Glover. A third film was talked about for several years but never emerged. During this time, the fan phenomenon took over with it being pointed out that both the Alien and Predator copyrights were held under the same roof at 20th Century Fox. This led to a popular comic-book crossover series and a number of spec scripts before the two were officially merged with AVP: Aliens vs Predator (2004) and AVPR: Aliens vs Predator Requiem (2007), which were hated by fans of either series. Minus the Alien crossover, there were several subsequent attempts to continue the franchise with Predators (2010), Shane Black’s The Predator (2018) and then Prey here.

Prey was the second film for Dan Trachtenberg. Trachtenberg emerged out of directing commercials to reasonable acclaim with the fallout shelter drama 10 Cloverfield Lane (2016). Since then, Tractenberg has directed for high-profile tv shows such as Black Mirror (2011- ) and the first episodes for The Boys (2019- ) and The Lost Symbol (2021), before returning to theatrical release with Prey.

Prey has been receiving some of the best notices of any of the Predator films to date with most calling it the best of the series next to the first film and some even going so far as to call it superior to the original. I try not to read other reviews before watching a film but this sometimes becomes difficult to avoid on social media. This gave me cause to wonder how much of the reaction was because the film ticks the boxes that fulfil what is lauded by the cultural zeitgeist of the moment – commitment to different cultural perspectives, a non-Caucasian cast and a strong woman protagonist – and how much was because it was a strong and involving action ride.

The surprise is both. It has been misreported that the film features an all-Native American cast – that is not the case as we also get a group of French trappers and Dane DiLiegro as The Predator. Nevertheless, we do have a film that makes considerable effort to ground itself in historical Comanche culture – which, going by the cooperation of several tribal groups on the end credits, would appear to be authentic. The film has gotten some flak for not shooting in the Comanche language and instead having the actors speak English. Trachtenberg said that they tried that out but it didn’t work. It is not as though such has not been conducted before – a perfect comparable example would be Mel Gibson having his actors speak in the Mayan language in Apocalypto (2006) – and one suspects it is simply a case of test screening audiences and the good old aversion of Americans to reading subtitles.

Prey takes quite a reasonable amount of time in the build-up. The Predator is only seen in terms of the blur of its invisibility shield, its heat-tracking POV or brief glimpses where it is wounded and we see a partially visible leg bleeding green blood. We all know what it looks like and so the film can afford to hold back. The rest of the time is given over to the focus on the Comanche culture and hunting rituals.

On a plot level, Prey varies little from the plots of the other films in which one individual realises that a Predator is hunting in their environment, leading to them eventually taking it on hand-to-hand. I suspect this is more to do with the limited nature of the Predator premise – you can only do so many variations on the humans hunted by an alien sportsman. That said, the film does well at setting up a strong female protagonist – it is hard to get any stronger than the plot of a woman defying the male-dominated preserve of hunting culture. In the role, Amber Midthunder gives a fierce and determined performance.

Prey ends up being a little slower than I expected of a film being called the best of the franchise. There are often long sections in inaction between the Predator hunting scenes. That said, Dan Trachtenberg sets the action up with flawless regard and it becomes intensive watching the bare-chested braves going up against the predator with arrows and axes or on horseback, or of Amber Midthunder facing a mountain lion on opposing tree branches. Or in watching the Predator carrying off a grizzly bear or effortlessly eliminating its way through the French trappers as they try to lay a trap for it. The triumph of the film is, as you might expect, Amber Midthunder finally going up against the Predator in hand-to-hand combat.