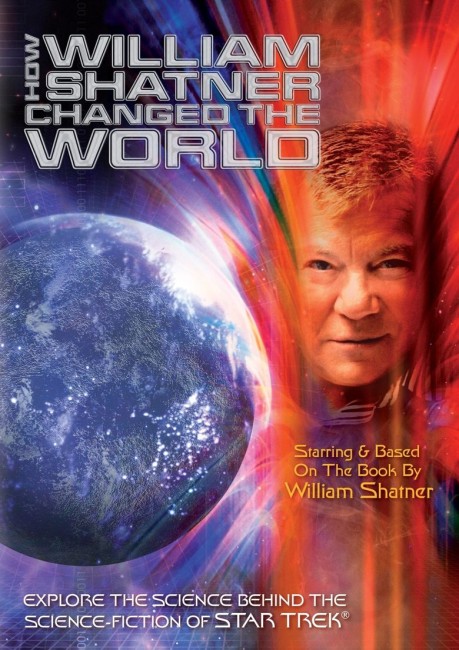 How William Shatner Changed the World is a documentary originally made for the Discovery Channel. It is based on the non-fiction book I’m Working on That: A Trek from Science Fiction to Science Fact (2002) in which William Shatner and co-writer Chip Walter toured various universities and research facilities comparing the advances that people were making with what originally appeared in Star Trek (1966-9). Here – albeit with the substitution of a far more sensational title – this has been adapted into a documentary with Shatner introducing the show. “I made it happen,” Shatner smirks to the camera at one point as host. “Or at least Star Trek did,” he hastily adds to qualify the statement. The idea of exploring the influence that Star Trek had on the real world – a far less attention-grabbing idea than its title suggests (which should more accurately be called How Star Trek Changed the World) – seems a rather slight idea as a documentary goes. Although it was apparently enough for Shatner to appear as host of another documentary premised around exactly the same thing with The Truth is in the Stars (2017).

The film does manage to cite some interesting cases to make its thesis. There is an interview with Martin Cooper, the inventor of the cellphone and the man cited with making the very first cellphone call, who talks how he found inspiration from the Star Trek communicators. Dr Marc D. Rayman of the Jet Propulsion Laboratory talks about his fascination with the idea of building a real world ion drive after hearing mention of it in the episode Spock’s Brain (1968). Steve Perlman talks about how a scene where Data was able to call up a library of all the music ever recorded inspired him to create QuickTime, which in turn led to the development of the iPod.

Seemingly running out of cases to cite where Star Trek directly inspired technological changes, the documentary extends beyond this to touch upon well-known issues like the first interracial kiss between Shatner and Nichelle Nichols in the episode Plato’s Stepchildren (1968) and the naming of the space shuttle Enterprise. Sometimes the film has to strain to make its case, like citing the use of the star Altair as the inspiration for the name of the first home computer built by Ed Roberts – although neglects to mention that Altair is also the name of a real-life star and was used in a fictional regard earlier in Forbidden Planet (1956), which makes the case for direct inspiration far less the case.

The film also includes a discussion of Star Trek: The Next Generation (1987-94). Both technical advisor Andre Bormanis and prop designer Rick Sternback talk about how the challenge was to be able to be as innovative with the technology as the original Star Trek had been two decades earlier. There is even Walter Koenig present who candidly admits that he hoped that The Next Generation would fall on its face but ended up changing his mind. Interestingly, the film claims the reasons that Star Trek: Deep Space Nine (1993-9), Star Trek: Voyager (1995-2001) and Enterprise (2001-5) were not as successful were because they did not offer the same optimistically utopian vision of the future – a theory this author does not agree with (I am more happy to go with product glut and diminishing returns as the reason).

One of the big annoyances that kills the film is William Shatner’s glib voiceover. Someone gives a technical explanation and Shatner gives an indifferent shrug “Whatever that means” or “sounds kinda cool.” Of Albert Einstein, he is given to comment (in regard to the limitations imposed on Faster Than Light travel by Special Relativity): “Someone with such cool hair. He was just not a fun guy.” Equally the scenes where Steven Perlman sets off in a mocap suit to enact his own dance version of a holodeck is something that sounds fascinating but becomes a source of ridicule to Shatner’s voiceover. Star Trek: Deep Space Nine producer Ira Steven Behr is mocked because he has a beard that is dyed blue.

The worst treated is Dr Marcel Alcubierre who puts forward the idea of warp bubbles, a cutting edge idea in physics, which he demonstrates with the use of dodgem cars, only to be cut off in the midst of a mildly technical explanation when the cameraman walks away while he is still talking and Shatner offers another withering witticism about the guy’s nerdiness. For all its being about the inspiration of ideas, this is a film that is frequently treating its interview subjects as nuts and kooks. At least Shatner is not conducting the interviews himself, as he did in The Captains (2011), where he frequently interrupted and overrode what his interviewees were saying with his own digressions and amateur analysis.

Equally, Shatner is belittling of Star Trek itself – referring to the reality of its sets as “just balsa wood and cardboard” or to the aliens as “pizza and frogs”. Script editor D.C. Fontana is brought in to explain how the idea of the transporter was created to avoid the costly effects of showing a shuttle land every week, even though this piece of information has little to do with anything else. When you are trying to make a case for how Star Trek‘s Utopian vision inspired a generation of scientists, this seems to be unnecessarily deflating and mocking the target. At the film’s most lunatic, there is Shatner in the desert at the Vasquez Rocks – the location for the episode Arena (1966) – illustrating how the medical tricorder was simply an ordinary salt shaker by grinding salt crystals into the camera lens with a long stem salt shaker.