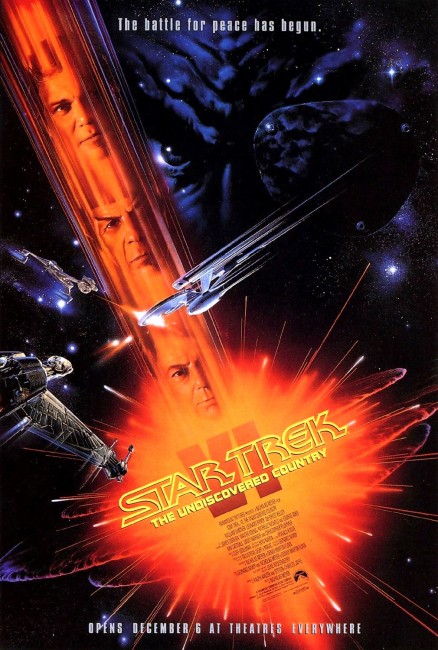 The Klingon Empire is disintegrating from within, having overspent on its military budget, leaving them unable to repair a depleted ozone layer. Only three months from retirement, Captain Kirk and the Enterprise crew are dispatched to negotiate a peace treaty so that the Klingons might join the Federation. Kirk, still bitter over the murder of his son by the Klingons, finds it difficult to trust his long-time enemies. As the Enterprise rendezvouses with the Klingon peace envoy, the Klingon ship is attacked and the ambassador Gorkon assassinated. All evidence points to the attack coming from The Enterprise and the Klingons arrest Kirk and Dr McCoy. In the interests of peace, The Federation allows them to be tried and convicted by the Klingons and sentenced to the harsh prison planet Rua Penthe. Meanwhile, now left in command of The Enterprise, Spock tries to find the traitor among the crew.

Star Trek (1966-9) was a dream founded on John F. Kennedy’s call to space. It was a perfect encapsulation of Kennedy’s foreign policy and the era of the American Peace Corps. Kept alive by the fans, Star Trek was revived as a series of films beginning with Star Trek – The Motion Picture (1979). However, twenty years on from the cancellation of the series, Star Trek had sadly slipped into middle-age. By the time of The Voyage Home: Star Trek IV (1986) with its picture of Spock as an anachronistic hippie described as “an LDS victim”, Star Trek had self-effacingly accepted the mantle of a dropout from the Berkeley/Haight-Ashbury era.

By the end of Star Trek IV, the subtitle The Voyage Home was deadeningly literal. The attempt to introduce new characters – Saavik, Ilia, Decker, David Marcus – had resulted in either their deaths or trivial sidelining; the attempts to kill off a major character, to mothball The Enterprise and promote its characters, all resulted in a creeping case of cold feet. By the end of Star Trek IV, it was seventeen years after the series had been cancelled and nothing had advanced at all.

As the original cast members gained creative control of the films, an indulgent playing to the fans and the old Star Trek espirit de corps had taken over to the exclusion of all else. The sad truth is that Star Trek: The Next Generation (1987-94), which had been started by Gene Roddenberry in the midst of this, and was initially perceived as the arrogant upstart, had in its five years on the air up to this point, done more in the way of telling solid science-fiction stories than anything the original Star Trek team had in nearly a decade.

Nicholas Meyer had made the last worthwhile Trek film, Star Trek II: The Wrath of Khan (1982), and returns to the captain’s chair here. After three films – Trek’s III-V – where self-indulgence, self-parody and a refusal of the lead cast/creative personnel to venture beyond a cosy conservatism had become the name of the game, it is a surprise to see a worthwhile Star Trek film again. Nicholas Meyer gives us a Star Trek film that succeeds in balancing drama, character evolution, humour that doesn’t come at the expense of the characters and a boldly going where no man … once again.

Meyer recognised the fact that his characters were in their middle-age in Star Trek II – something that the team increasingly tried to ignore with laughably obviousness once they became the creative driving force. Returning to the series, Meyer welcomely addresses the issue of its’ cast’s age again. Thus at long last Sulu gets the captaincy of his own ship (at the age of 51, the point when many people are starting to look forward to retirement). The end wherein the cast are placed into long overdue retirement and the reigns handed over to the future crews of The Enterprise with each actor signing off as the end credits roll brings the twenty-five year journey to a moving end.

There are some huge plot holes in Star Trek VI: The Undiscovered Country – one fails to believe an empire would prefer military expenditure at the cost of oxygen; and there is a silly scene trying to use a Klingon dictionary to hoodwink a border post, especially in light of the fact that the use of translators is established several times elsewhere throughout the film. However, this is relatively unimportant against having a Star Trek film that maintains a dramatic and exciting plot. Some scenes have a joy – the imposing arrival of the Klingons on board the Enterprise and the baited dinner scenes, Spock’s Holmesian work in trying to puzzle out the traitor, the trial.

Like old Star Trek, The Undiscovered Country also has a political subtext – in the 1960s, the Klingons were a veiled stand-in for the Russians and the Cold War. Now the series finally catches up where Star Trek: The Next Generation had travelled a number of years before and accordingly fashions its plot as a trendy headline-grabbed re-enactment of Glasnost, the Gorbachev coup and the fragmentation of the Soviet Union.

On the film’s down side, there was an indulgent side to Nicholas Meyer in Star Trek II that becomes apparent here. In The Wrath of Khan, Ricardo Montalban’s quoting of Melville and Dickens had its amusements, but Meyer’s similarly having Christopher Plummer quoting Shakespeare at 45 rpm at the climax here becomes incredibly silly, disrupting what should be a tense and exciting finale. Kim Cattrall’s primly sexy Vulcan is a fine addition to the series that one wishes the plot had not arbitrarily thrown away.

The title, by the way, is a phrase that comes from Shakespeare’s Hamlet (1602), being a euphemism for death. The Undiscovered Country was, in a trivia note, the original pre-production title for Star Trek II: The Wrath of Khan. There is also a line in the film where Christopher Plummer suggests that Kirk should read Hamlet “in the original Klingon”. In 1999, a fan group known as The Klingon Language Academy published a copy of Hamlet translated into Klingon. Christian Slater makes a blink-and-you-miss-it cameo as one of Sulu’s officers – he’s the one that wakes Sulu up. Michael Dorn, who played the regular character of Worf in Star Trek: The Next Generation, plays a Klingon trial lawyer also known as Worf, which the production notes tell us is supposed to be one of Worf’s ancestors. Flashback (1996), an episode of Star Trek: Voyager, intriguingly recreates and sets another entire story in and around the events of The Undiscovered Country, while Rura Penthe was revisited in the Star Trek: Voyager episode Judgment (2003).

Nicholas Meyer also directed Time After Time (1979) where H.G. Wells pursues Jack the Ripper through time to the present; the controversial nuclear war tv movie The Day After (1983); and the little seen Merchant-Ivory production The Deceivers (1988) about Indian Thuggee cults. He has also made a couple of comedies as director, the literary pastiche Volunteers (1985) and the spy spoof Company Business (1991), which did no business. His other genre entries include the scripts for Invasion of the Bee Girls (1973), the tv movie The Night That Panicked America (1975) about the infamous 1938 Orson Welles War of the Worlds radio broadcast; and The Voyage Home: Star Trek IV (1986). From the late 1990s, Meyer moved away from directing to writing scripts such as Sommersby (1995), The Prince of Egypt (1998), The Human Stain (2003) and Houdini (tv mini-series, 2014), plus created the tv series Medici, Masters of Florence (2016– ). He also produced the epic tv mini-series The Odyssey (1997), the Arnold Schwarzenegger action vehicle Collateral Damage (2002) and the tv series Star Trek: Discovery (2017– ).