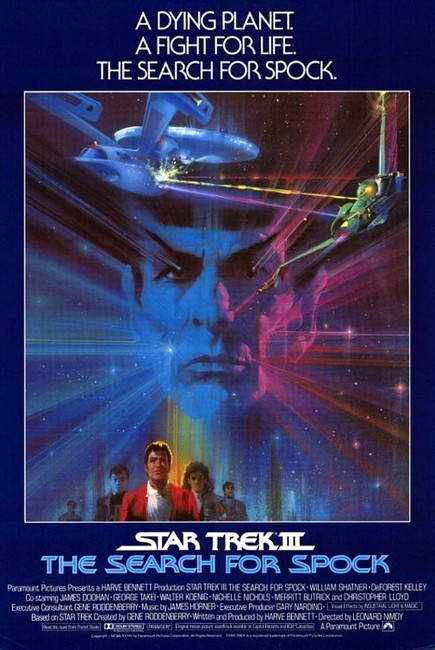 Following Spock’s death on the Genesis planet, the Enterprise returns to space-dock. There Kirk is contacted by Spock’s father Sarek who tells him that Spock is not dead but that he transferred his soul into the mind of Dr McCoy just before he died,. This has served to place the desperately confused Dr McCoy in the psych ward. Defying Starfleet orders, Kirk and his crew break McCoy out, steal the Enterprise and set out to retrieve Spock’s body from the Genesis planet so that his soul might be reunited. The rescue is complicated by the Klingons who want the secret of Genesis, while the planet itself in the process of disintegration due to instabilities in the Genesis device.

The Search for Spock was the third of the Star Trek films. In the previous entry Star Trek II: The Wrath of Khan (1982), the series had taken the radical step of killing off the series most popular and fascinating character, the emotionless and coolly logical half-human, half-alien Spock. It was a move that had fans up in arms even before the film opened. It is also one that Paramount decided would be in their best commercial interests to rescind by the time of this sequel.

With Star Trek III: The Search for Spock, Leonard Nimoy takes the opportunity of his characters’ on-screen absence to step into the director’s chair. Nimoy had directed episodes of various tv series such as Mission: Impossible (1966-73) and The Powers of Matthew Starr (1982-3) but The Search for Spock became his feature film debut. Once there, Nimoy does a reasonable job, demonstrating a good eye for dramatic set-up.

Star Trek III: The Search for Spock is a comfortable, easy film. It is clearly pitched at the Star Trek fans. The regulars slip back into their roles effortlessly and Leonard Nimoy’s new wrinkle is to allow each to come on with their own particular scene like a comedy ensemble. It proves amusing, although only Nichelle Nichols gives any performance worth sitting up and paying attention to in one fine scene pulling a phaser on a cocky junior officer.

William Shatner, the king of over-actors, at least gets the opportunity to conduct the role of Kirk with some extra depths. This and the previous film The Wrath of Khan may be some of the best acting that Shatner has ever done – at least up until his sidesplitting role as an aging lecher in the tv series Boston Legal (2004-8).

For all that, Star Trek III: The Search for Spock also disappoints. It is too comfortable, pitched too easily at the fans. Indeed, the legacy of Leonard Nimoy’s creative influence was to turn the Star Trek film series into a vehicle controlled by the regular cast from the tv series – but having done so, the Star Trek films settled into a far too easy middle-age that became more about the actors showing up and never advancing beyond their character parts, while any sense of galactic adventuring and exploration of ideas that the original series had represented were allowed to fall by the wayside.

This is surely indicative in this film’s plot and even title – having killed off Spock in the previous film, was there any real doubt that Spock, the series’ most popular character, would not come back here? You cannot slam the film for not playing to fan appeal in this regard but you can criticise it for the shabbily unimaginative way in which it does so. You cannot help but think that the original series and any of the modern Star Trek tv incarnations would have used the opportunity to delve into questions of the soul or examine the idea of reincarnation. The film leadenly ignores any of these and proceeds to its intended path of reviving the character in the most pedestrian and conceptually unengaging way possible.

It is certainly light, entertaining fun and Leonard Nimoy has a deft hand with the comedy and dramatic action but as anything other than a film intended for its fan audience, The Search for Spock lacks.