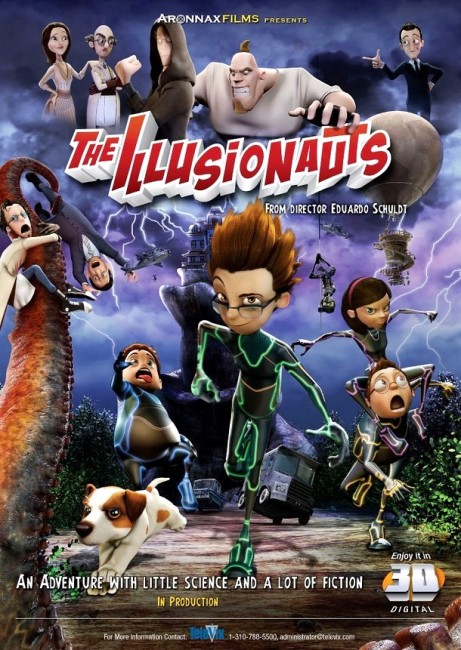 In France, the President dislikes the fact that the villain Da Vinci has taken over culture everywhere. He comes up with a plan to promote the French science-fiction writer Jean Vissognier who never had any success. Scientists have developed The Illusionarium that allows people to enter the imagination of a person – it is theorised that they will thus be able to enter and rearrange aspects of Vissognier’s stories to turn them into successes. It is then discovered that something is disrupting Vissognier’s stories and causing characters to vanish. Four twelve-year-old children are chosen – twelve being the age when the imagination is at its height – each of them representing an aspect of Vissognier’s imagination. They are then sent into the stories via the Illusionarium to find the hidden reset button that will put the story aright. However, Da Vinci seeks to sabotage things by sending one of his thugs in after them.

The Illusionauts is the novelty of an animated film from Peru (I am unable to recall even seeing a Peruvian live-action film before). It was the fourth animated feature-film for Eduardo Schuldt whose other works have received little play in English. He did subsequently make the live-action horror film The Entity (2015) and then returned to animation with The Nutcracker Sweet (2015). The Illusionauts was originally made in 3D and brought up for a US release under the title Freedom Force, only to be dumped straight to dvd and shown only in 2D.

The Illusionauts reminds of The Pagemaster (1994), an animated film that had a young boy travelling through the lands of fiction. Here a similar premise is given a thin patina of science-fictional rationalism by the introduction of the improbable device known as The Illusionarium – not unakin to the mental projection device used in The Cell (2000), which itself involved wave of the wand science – that allows a group of kids to be transported inside the author’s imagination and influence the outcome of the stories. It should be said that not a huge amount has gone into working out how such as device might work.

The initial appeal The Illusionauts had when one read its premise was of something on the order of the mind-boggling playfulness of one of Jasper Fforde’s Thursday Next books about a detective policing the world of literary fiction and making sure classic stories play out as they should. Instead, The Illusionauts operates more on the level of something like Mr. Peabody and Sherman (2014), an animated romp with children hopping from one historic adventure to the next.

To this extent, the film has been slung together for no real other purpose than to have a bunch of kids having adventures in scenes from various of Jules Verne’s stories. (The author in the story whose imagination is entered is Jules Verne in all but name – why they didn’t use Verne is a mystery given that his works been in public domain for decades). Thus the kids end up aboard the rocketship from From the Earth to the Moon (1865), fighting the giant squid from Twenty Thousand Leagues Under the Sea (1870), pursued by lions in the balloon from Around the World in 80 Days (1873). There is little more to the film beyond that and a cliche super-villain to drive the scheme along and even more wave of the wand science devices to allow the giant squid to be manifested at the climax and rampage through the streets of Paris.

The Peruvians animators fail to do anything remarkable with the CGI animation and the film looks like little more than a work that was produced circa the late 1990s. The premise is a good one – and something that a better film could have had a field day with – but the relentless pitching of the show to a juvenile audience fairly much dooms The Illusionauts to those in the single digit age group.