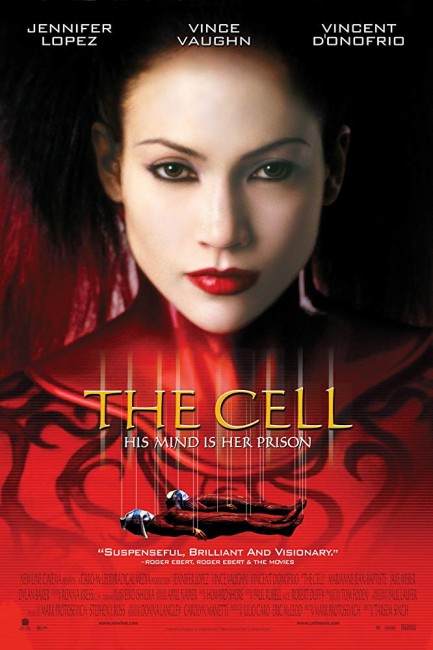 The FBI track down Carl Stargher, a serial killer who abducts women and then drowns them and bleaches their bodies. Just as they arrive, Stargher has a schizophrenic seizure and lapses into a coma. However, Stargher has placed his latest victim in a tank in a remote location, which is timed to flood and drown her within 40 hours. As time ticks away, the FBI in desperation turn to a group of psychologists who have devised a unique procedural method that allows someone to enter the mental landscape of a patient. Therapist Catherine Deane has so far only used the process to communicate with autistic children but agrees to enter Stargher’s mind. However, once inside Stargher’s head, Catherine finds herself in a disturbed surreal terrain where she is in danger of losing contact with her own perception of reality and being taken over by Stargher.

When The Cell came out, critics raced, in the way that critics do, to find other films that it might be compared to. They came out calling The Cell a conceptual mix of The Silence of the Lambs (1991) meets The Matrix (1999). The Silence of the Lambs connection is fair but the Matrix comparison is more due to people scrambling to find something recent of vague connection – ie two films about people in artificial landscapes – than anything else.

The film that The Cell comes closest to is Dreamscape (1984), which featured assassins warring in people’s dreams. Although, the work that influences both the most is Roger Zelazny’s novel The Dream Master (1967), which has a central character almost identical to the one played by Jennifer Lopez here, although before that the idea was tentatively tried on film in The Electronic Monster/Escapement (1960). There have been a number of subsequent films on the theme with the anime Paprika (2006), Shinya Tsukamoto’s Nightmare Detective (2006) and sequel, Inception (2010), although that was in a league all of its own, Vanishing Waves (2012), Mindscape (2013), Real (2013), Incarnate (2016) and Lucid Dream (2017).

What made everybody stand up and pay attention with The Cell was director Tarsem Singh’s visuals. The Cell was one of the most extraordinary directorial debuts of its or any other year. It is hard to find any other filmmaker or artist that Tarsem Singh might be compared to – at a pinch, his work kind of suggests Goya gone MTV. When it comes to depicting the inner terrain, Singh has given his imagination free reign and gone completely wild – characters wearing giant purple silk headdresses that cover three entire walls of a throne room; golden tendrils create tiny filigreed patterns around the edge of the frame as people talk.

The sets, and in particular, the costumes are extraordinarily lavish. Inside the dream world, the colours are slightly off, landscapes are patterned in ways that are odd to the eye. Even in the real world scenes, Singh is constantly finding bizarre and unusual patterns – FBI seen from above running across a children chalk hopscotch pattern, the gas of jet engines billowing into the camera.

Singh creates a number of striking and disturbing images – the image of Vincent D’Onofrio strung up from hooks by rings pierced through his back; a display of zombified doll-like women attached to clockwork machinery that runs them through endless poses; the image (undoubtedly taken from the controversial artist Damien Hirst) of a horse being sectioned by glass plates and still left alive afterwards; Vince Vaughn being held down while his intestines are slowly being unwound on a rotisserie spit.

Former music video director Tarsem Singh is an extraordinary find, although at the same time everything else in The Cell takes second place to his visuals. If a more pedestrian director had made The Cell, one suspects that it would have barely been enough to interest anybody, let alone attain a theatrical release. The serial killer plot is ordinary and holds no surprises or twists. The script is frustratingly vague about the details of the process that allows people to enter the minds of others.

Even the performers fail to make any distinction on the film. Jennifer Lopez’s character vanishes beneath the visuals – all we ever seem to know her by is her admittedly eye-catching costume changes, but not as a person. Similarly, Vincent D’Onofrio gives a fey and silly performance but despite the fact that most of the film takes place inside his head and the story delves back into his childhood, the character is entirely opaque to us. He, for example, is never a threat – we don’t fear him. The landscapes and the wildness of Tarsem Singh’s images produce a sense of dis-ease but the character of Stargher is only a handful of prancing poses.

Subsequent to The Cell, Tarsem Singh was attached as director to a number of projects including remakes of Westworld (1973) and Logan’s Run (1976). He instead went onto personally fund The Fall (2006), a visually extravagant tale being told to a child, followed by the Greek myth adventure Immortals (2011), the Snow White adaptation Mirror Mirror (2012), the bodyswap film Self/less (2015) and the reworked Wizard of Oz tv series Emerald City (2017).

The Cell 2 (2009) was a heavily disappointing sequel with Tessie Santiago as a new psychic tracking serial killer Frank Whaley.

(Winner Best Production Design and Nominee for Best Musical Score at this site’s Best of 2000 Awards).