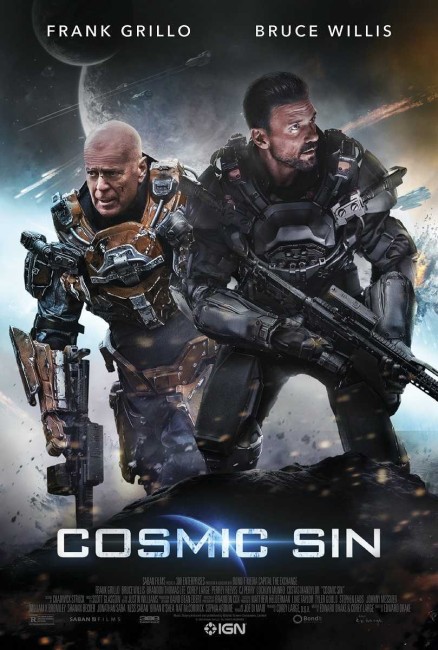 The year 2524. Humanity has spread out through the universe thanks to the development of Quantum Propulsion Technology. Earth military now receives a message from two people stationed scouting a planet for mining potential who are under attack by aliens. General Ryle is placed in charge and demands the reinstatement of James Ford. a former general who was discharged after dropping a Q-Bomb on an inhabited colony killing 70 million. A group of people returning to Earth prove to be controlled by the aliens and can only be stopped in a massive shootout. Ryle and his team debate about what to do and the decision is made to track down the aliens’ planet and strike first by dropping a Q-Bomb on them. To this extent, Ryle and Ford gather a rogue team of soldiers, appropriate a Q-Bomb and jump through the quantum gate with the intent of taking the fight to the aliens.

Cosmic Sin may well have been intended for a theatrical release but ended up going to streaming media. You get the impression that not many people cared about the film – the IMDB’s listing for the film’s official website leads to a Russian site streaming pirated content, for instance.

It is evident from the way that Corey Large produces films that he makes them with medium budgets that sit somewhere between B+ and A-. Cosmic Sin reads as though it has been conceived on an A-budget and wants to be a big, epical space war epic but is being forced to operate on considerably less than that. It has A-list faces like Bruce Willis and the rising name of Frank Grillo. However, the action feels severely reduced in scope. The alien planets are simply forests and a studio desert set (shot in Georgia under tax incentive money). The aliens are just regular humans represented by body snatchers that to do little more than leave marks on the host’s face like Goths whose makeup has run in the rain. The film even manages to avoid any of the usual spaceship and space journey effects with a sleight of hand called Quantum Propulsion Technology that essentially teleports the soldiers into orbit around the planet in spacesuits, followed by a handful of effects shots of them undergoing re-entry.

Cosmic Sin feels as though Corey Large and Edward Drake set out with a mutual admiration of Armageddon (1998) and sought to emulate something of the same. There is a similar plot about a team of tough individualists who decide to stick their middle finger out to the bureaucratic rules, do everything their way and head off into space to save the Earth. And in both cases, the mission is commanded by Bruce Willis.

Bruce Willis is given the interesting character of a disgraced general who dropped a bomb that wiped out an entire planet of 70 million people. This is not something the film seems to ever take particular objection to – it is implied that he did what was necessary and his reenlistment suggests that he may be needed to do the same again. The film does have one scene debating the ethics of first strike but in reality the entire film is a justification for a pre-emptive strike against the enemy (the titular ‘cosmic sin’) – and given that the soldiers head off on an expedition to do so armed with a bomb that can wipe out an entire planet, the underlying morality by which the film operates is rather alarming.

Cosmic Sin is a badly made film. Watching it, you often feel as though key pages of plot have been tossed out – like if the original attack took place on a desert world, why do the assault team head off to a forest world? We go from an alien attack on a desert world where there are only two people, followed by the military being assembled in response to that. But then there are a group of other people brought back in from … somewhere else (it is never explained who they are). They go through decontamination procedures – which take place in an open room with no separation between the soldiers and the returnees – before everything turns into a shooting match as it becomes evident that the returnees are inhabited by alien body snatchers. You can’t help but feel that if better contamination procedures were in place the whole shootout wouldn’t have been necessary.

Cosmic Sin is a film that is absolutely laughable when considered in terms of believable military tactics. A team of soldiers decide to conduct a rogue expedition to start a war on an enemy – something that would surely be regarded as treasonous and have them court-martialled in any contemporary military service. They have zero problem appropriating a planet-destroying weapon – the Q-Bomb just sits around unguarded and can be picked up and taken with nobody trying to stop them – you would be rightly alarmed if today’s military treated nukes the same way.

One of the most ridiculous things about the film for me was that the soldiers head off into action with zero intel about the enemy, not even knowing what they look like, only the vague mission of somehow finding where the aliens come from (despite bringing no experts that might be able to decipher alien technology and work out galactic coordinates with them) and taking the fight back to the aliens’ homeworld. And that the team’s method of starting a war involves about a dozen of them teleporting into space over the alien planet, ending up with them dispersed over different areas – the equivalent might be a dozen SEALs deciding to eliminate the threat of the Taliban or Isis and parachuting into a random area of Iraq/Afghanistan all in different places and with no idea where the target is, what the target even looks like and with apparently no supplies other than the guns they carry oh and a nuclear warhead.