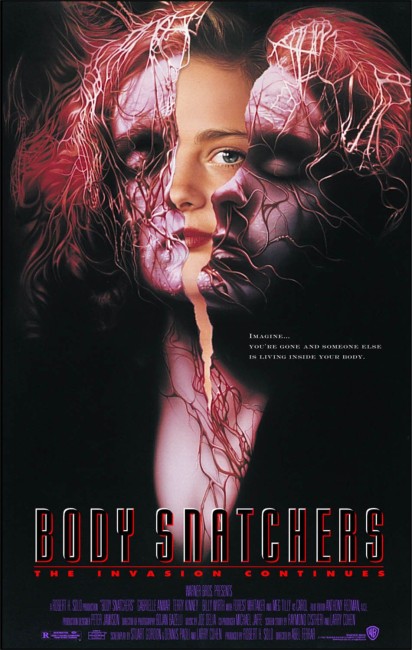 aka Body Snatchers: The Invasion Continues

Teenager Marti Malone reluctantly accompanies her family as they tag along with her father who is a touring safety inspector of US army bases. On one base, Marti becomes attracted to handsome chopper pilot Lieutenant Tim Young. Marti then discovers that personnel on the base and members of her family are being replaced by emotionless alien pod duplicates. As she and Tim try to flee, they find the pods are taking over everywhere.

The greatest surprise about Body Snatchers was the name of Abel Ferrara attached to it as director. Abel Ferrara’s films – which include the likes of The Driller Killer (1979), The King of New York (1990) and Bad Lieutenant (1992) – are filled with a resolutely grim social realism and are about as far removed from the unreal world of 1950s science-fiction that one can imagine. At least, Body Snatchers was not directed, as originally intended, by Stuart Gordon, of Re-Animator (1985) and From Beyond (1986) fame, where Gordon’s jokey comic-bookish, splatter heavy approach would have wrecked a film that needs a subtle psychological approach.

Abel Ferrara does not disappoint. He succeeds in giving the story new interpretations. The script throws out fairly much any connection to the two previous versions. (It does use two or three scenes familiar from previous versions – the mother who replaces the crying baby with a pod; a scene where a switchboard operator tells Forest Whitaker that he is unable to get through to the person he wanted despite his not giving the switchboard the name; the scene where the pods are distributed around the country; and the unearthly pod scream from the 1978 remake. Body Snatchers also retains several personnel from the 1978 remake – producer Robert H. Solo and makeup supervisor Thomas Burman). This version, if it has any faults, lies in the familiarity of its story – one knows what is going on, so there are no surprises to the reports that people’s spouses are not themselves anymore or in Meg Tilly’s enigmatic smiles. Ferrara perhaps realizes this and does not dwell too long on the build-up before launching into the far more effective all-out nightmare.

Once he gets there, Abel Ferrara delivers a number of genuinely spooky scenes. Like the scene in school where Reilly Murphy’s crayon drawing is the only one that is not identical to the ones from all the other children. There is a very eerie scene with the pods growing as Gabrielle Anwar sleeps in the bath and Meg Tilly gives Terry Kinney a massage as tentacles start creeping up to cover both victims’ faces. Meg Tilly gives a striking performance (although at 33 she hardly seems old enough to convincingly play the 23 year-old Gabrielle Anwar’s mother – less than five years before she could easily have been cast in Anwar’s part herself). Just the way she lingers on a perfectly normal phrase like “I love you, too” becomes unsettling.

The pods here are a good deal more reasoning than their counterparts in previous versions. Meg Tilly has a remarkable soliloquy where she tries to persuade Terry Kinney that there is no hope. The pods are also much more confrontational and proactive, trying to arouse humans into emotional reactions to give themselves away. “I fucked you girlfriend,” one of the soldiers tells Billy Wirth to try and get a response. One of the most remarkable scenes comes during the escape from the hospital where Gabrielle Anwar, pretending to be a pod, comes across Christine Elise. Both seem unsure, trying to size up the other as they pass as to whether they are have been replaced or not. But then Christine Elise casually mentions back over her shoulder “I saw Andy – he was looking for you.” For a long moment Anwar passes on, determined not to answer but then turns back with a whispering plea, “Where?” only to be exposed. It’s a beautiful scene.

The ending tries to be cautiously hopeful. Bar the 2007 remake with its happy ending, this makes Body Snatchers the most hopeful of all four versions of Invasion of the Body Snatchers. Here the two leads escape to freedom but as Gabrielle Anwar’s final voiceover states, “They get you when you sleep, but you can only stay awake so long,” it seems a victory that is only short won against such bleakly overwhelming odds.

This version interestingly chooses a military base as its setting. In the two previous versions of the story, the setting held immense metaphorical value – in 1956, it was a small town and thus the film was about the upsetting of America’s cosy family self-image; in the 1978 version, it was a big city and the film became about urban alienation and the disintegration of modern relationships; while the 2007 version became all about a politically uncertain world. In interviews, Abel Ferrara was vague about what the pods metaphorically represented in this version and it is initially unclear what meaning the location here holds. Soon this choice becomes apparent, for the contrasting of the invasion against the military base allows for numerous symbolic scenes that Ferrara lingers on, like the ominous lowering of the American flag. Gradually, Bojan Bazelli’s beautiful autumnal photography becomes subtly eclipsed by darker, shadow-heavy lighting. The pods in this film then seem to stand in for the socio-moral collapse of the US that frequently obsessed 1990s American media.

Abel Ferrara’s films echo with the weight of the morally diseased society through which his characters perpetually seek spiritual redemption. In Body Snatchers, perhaps the least Ferrara-like of Abel Ferrara’s films, Gabrielle Anwar represents a nascent emergence of teenage sexuality. Peculiarly enough, in its opening scenes, the film suggests of all things a Coming of Age story. Gabrielle Anwar’s opening narration – “But then nobody asked where I wanted to be that summer. Then again I suppose things happen for a reason” – is almost archetypal of this genre. Bojan Bazelli’s beautiful photography suggests a perfect nostalgic American Midwest and Ferrara even starts to carry it through as a romance, with the scenes between Gabrielle Anwar and moodily handsome Billy Wirth being very sweet indeed. The pod takeover is seen against a series of teenage crises – rebellion against parental control, the alienation of a young child. The film is partially a metaphorical emergence from childhood into a world of adult responsibility where the American dream of family life and of romance, indeed all values of comfort, are brutally dashed in the need for pure survival. It is an Abel Ferrara film in that it mourns a loss of innocence.

Abel Ferrara has directed a number of other films of genre distinction:– the notorious The Driller Killer (1979), which was banned as a video nasty in several countries; the rape-revenge drama Ms 45/Angel of Vengeance (1981); Fear City (1984) about a serial killer stalking strippers; the vampire film The Addiction (1995); the William Gibson adaptation New Rose Hotel (1998); and the End of the World film 4:44 Last Day on Earth (2011).