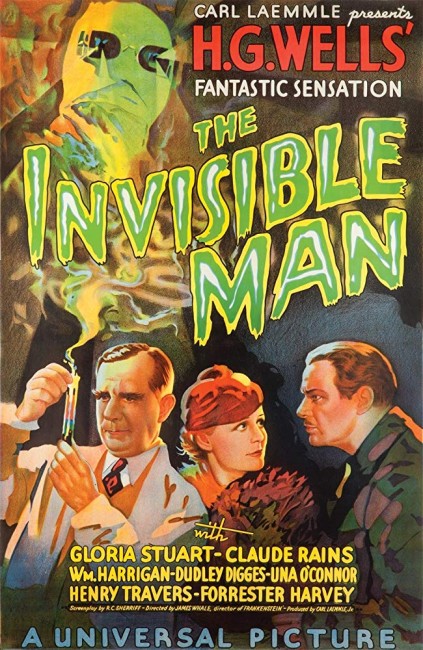 A stranger, his face hidden behind dark glasses and bandages, takes a room at an English country inn. His rude manner raises the ire of the locals. When they who go to confront him, he strips off his clothes to reveal that he is invisible and then goes on a gleeful rampage through the town. In reality, the invisible man is chemist Jack Griffen who has experimented with the drug monocaine, which has made him invisible. Unknown to Griffen, the drug also has a side effect that causes megalomania and insanity. Driven by delusions of grandeur, Griffen creates a reign of terror across the countryside, his invisibility making him uncatchable by the authorities.

H.G. Wells was not at all happy with this adaptation of his popular novel The Invisible Man (1897). That aside, The Invisible Man is one of the few times when a film improves upon a book. R.C. Sheriff’s script turns H.G. Wells’s dry and humourless, nevertheless fascinating, narrative into an eccentrically likable film.

The Invisible Man was directed by the perpetually unconventional James Whale, who had just made the classic Boris Karloff version of Frankenstein (1931) and would next go onto the fan favourite of Bride of Frankenstein (1935). Bride of Frankenstein is generally considered James Whale’s all-time classic, although this author has a strong preference for The Invisible Man as Whale’s undeclared masterpiece. Whale’s customarily eccentric humour is allowed loose on H.G. Wells’s plot, which is the problem that Wells seemed to have with the film.

Claude Rains, who in most other roles seemed stiff-necked, gets into full flight as Griffen, playing the role with an exuberant burlesque and an hilariously barbed waspishness. James Whale has gleeful fun in Griffen’s manic cavortings through the town, stealing bicycles, smashing windows and joyously running rings around cops while only wearing a shirt. The threat of the invisible man is constantly being wittily undercut with scenes of him going to bed in pyjamas while still invisible or bursting into William Harrigan’s house, with the threat immediately turning to a “Brrr, it’s cold.” In the film’s most eccentric scene, an invisible Claude Rains goes skipping down a country lane wearing a pair of stolen pants, singing “Here we go gathering nuts in May.”

The film has an initially amusing sense of British parochialism. This is something that recurs in James Whale’s work but in the scenes with the comic foil cops and Una O’Connor’s Cockney barmaid here, it emerges somewhat shrill – the film’s only real failing. However, James Whale’s visual style is as always superb. The opening of the film is wonderful – the moment the stranger in the snow-covered coat, his face hidden behind bandages and dark glasses, appears out of the storm sets the stage for something unusual, which is quickly compounded by the stranger’s outright rudeness. The moment the invisibility is first introduced holds a marvellous shock – the image of his face with the bandage half unwound and dark glasses still seated on his nose is a startling one.

Horror film critic Carlos Clarens states that The Invisible Man has the best dialogue to ever grace a science-fiction film and he may not be far wrong. The script was adapted by R.C. Sherriff, who had written the play that became the basis of James Whale’s first film Journey’s End (1931). There is that wonderful scene where Griffen explains things to Kemp. “Just a scientific experiment. To do something no other man in the world had done. But there’s more to it than that, Kemp. I know that now. It came to me suddenly. The drugs I took seem to light up my brain. Suddenly I realized the power I held, the power to rule, to make the world grovel at my feet.” He plans their rule together: “We’ll begin with a reign of terror. A few murders here and there. Murders of great men, murders of small men, just to make sure we make no distinction.”

One of the finest stretches of dialogue is his explanation of the problems of being invisible. “There are one or two things you must understand, Kemp. I must always remain in hiding an hour after meals – the food is always visible in me until it is digested. I can only work on fine, clear days. If I work in the rain, the water can be seen on my head and shoulders. In a fog, you can see me like a bubble. In smoky cities, the soot settles on me until you can see a dark outline. You must always be at hand to wipe my feet, even dirt between my fingernails would give me away. It is difficult at first to walk down stairs, one is so accustomed to watching our feet. These are trivial difficulties, we shall find a way of working out everything.” It is a grand film, although in some other ways it never leaves 1930s clichés far behind – “He meddled with things men were meant to leave alone,” people are heard to mutter.

The effects work is very good. Bicycles ride on their own, lines of footprints appear in the snow, cigarettes are lit and smoke puffed in mid-air. A few trick have lose their lustre today – no modern effects artist would be allowed to get away with not showing the back of the collar when the invisible man wears a shirt. The film is still a remarkable achievement to the technical prowess of effects artists eighty years ago.