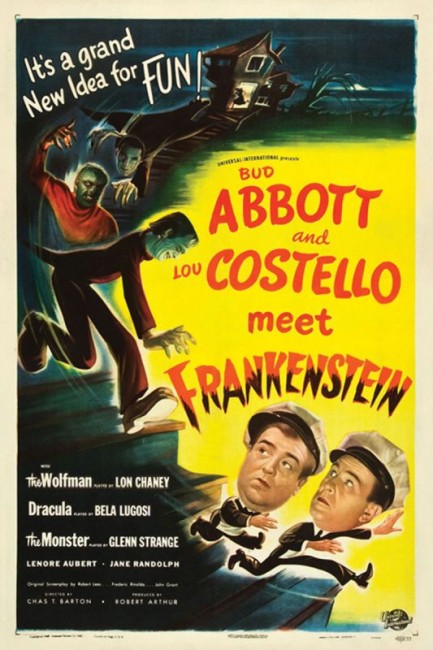 Two bumbling baggage clerks, Wilbur and Chick, are asked to deliver a crate to a wax museum. Wilbur discovers that the crate contain the bodies of Dracula and the Frankenstein monster. In their bumbling, the two of them succeed in freeing Dracula. Dracula revives the Frankenstein monster, intending to use it as his servant. Dracula then enlists the help of scientist Sandra Mornay to transplant Wilbur’s brain into the monster’s head in order to make it more docile.

At the same time, Universal had exhausted most of the possibilities from both of its Frankenstein and Dracula film series, having spent most of the decade shuffling them around in a series of team-ups with one another beginning with Frankenstein Meets the Wolf Man (1943). The decision on Universal’s part to combine both Abbott and Costello and its monsters’ careers was a brainstorm that falls somewhere between ingenuity and creative desperation.

The monsters in Abbott and Costello Meet Frankenstein are reduced to buffoonish characters, emptied of any threat they ever had. The film brings back Bela Lugosi as the Count, a role he had resisted repeating for the seventeen years following Dracula (1931), during which time his career had slid down into poverty row mad scientist parts). For all its billing as the top-lined monster, the Frankenstein monster is only a supporting player – Dracula is the main threat, concocting an improbable scheme to turn the Frankenstein monster into his personal slave using Lou’s brain. The Wolf Man, as is the case in most of the Universal monster bashes, is fairly much a hanger-on who runs around the periphery of the action like a lost puppy dog with nothing to do as a character.

On the other hand, Abbott and Costello Meet Frankenstein has Abbott and Costello operating at their comic heights. The script outfits them with a number of snappy one-liners: “I’m a union man and I work sixteen hours a day,” “A union man only works eight hours,” “I belong to two unions.” Or the wolfman’s trying to explain his plight: “Every night when the moon is full I turn into a wolf,” “Yeah, you and about twenty million other guys.” There is a good deal of, if not exactly subtlety, then at least dexterity to the physical comedy running around the wax museum with the monsters popping out of their crates and coffins, and later around the lab. Of all Abbott and Costello’s films, monster bashes and otherwise, Abbott and Costello Meet Frankenstein is oddly the one that has become the most well remembered by the public at large and even attained a nostalgic fondness.