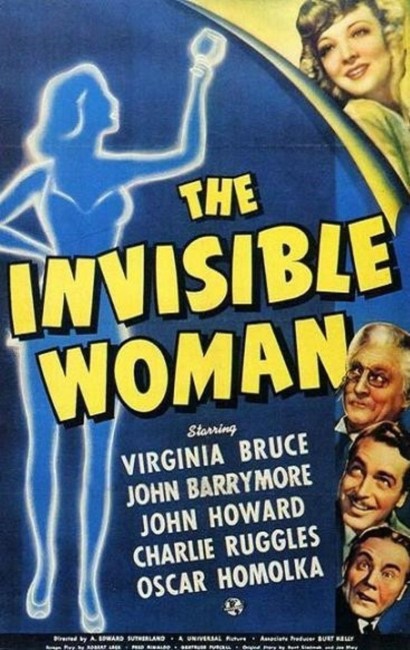 The eccentric Professor Gibbs places an ad looking for a human test subject for his experiments in invisibility. At the same time, wealthy playboy Richard Russell, who has been sponsoring Gibbs’ experiments, receives news that he is bankrupt. The ad is answered by model Kitty Carroll who has just been fired by her officious boss Grawley. The experiment is successful and the invisible Kitty immediately goes off to teach Grawley a lesson. At the same time, the invisibility process is sought by a gang of criminals who want to use it to smuggle their boss back from Mexico.

Director A. Edward Sutherland hailed from England and had a long history in screen comedy going back to the silent era. He was, in fact, one of the original Keystone Kops and had worked with Charlie Chaplin, Laurel and Hardy, Abbott and Costello and was most famous as a director for W.C. Fields. (The Invisible Woman even features a regular acting appearance from Shemp Howard, better known as one of the Three Stooges, who is cast here as one of the goons. In strange casting, there is also Margaret Hamilton, aka the Wicked Witch of the West in The Wizard of Oz (1939), playing the maid). Sutherland had delved into genre material several times before with International House (1933), a screwball W.C. Fields comedy set around an early television invention, the black comedy Murders in the Zoo (1933) and the light fantasy Beyond Tomorrow (1940), but was mostly known for his comedy work.

This comedy focus makes for the slightest and silliest of all the Invisible Man films. A. Edward Sutherland may have had a long career directing comedy but little of that becomes apparent when it comes to The Invisible Woman where the entire focus of the film seems to be lowbrow slapstick yocks. The opening scene, for instance, features butler Charles Ruggles tumbling down the stairs after tripping on a bottle and then being slammed against the wall as the front door is opened in his face. Ruggles and the goons are constantly falling off stepladders, getting their feet stuck in buckets, falling out of cars when the doors are opened and so on. There are comic set-pieces with Virginia Bruce humiliating pompous boss Charles Lane, including jamming his head in a window sill so that she can kick him in the pants, and then throwing an invisible tantrum and tossing things around the office.

The effects scenes, always the highlights of the rest of the Invisible Man films, are variable. There are some good scenes as Virginia Bruce puts on a dress and invisibly parades around in it but you can also see the double-exposure lines of her blacked-out arms in these scenes. The film’s comedic and effects highlight is a scene where Virginia Bruce turns up at the lodge and there is some adept interplay between she, John Howard and others over her mixing drinks, getting drunk, levitated logs, they having to carry her nude body wrapped in a carpet, and she putting on a pair of stockings.