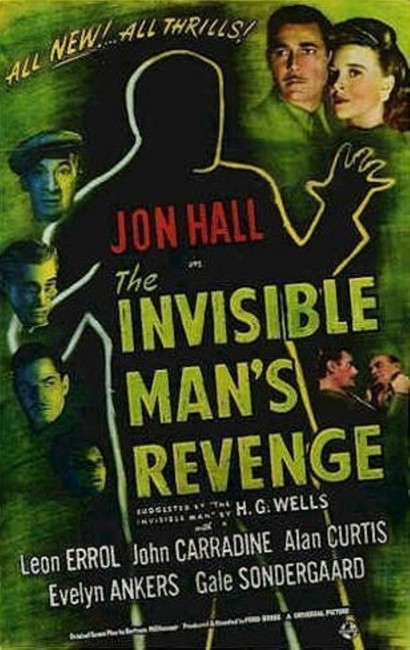 Robert Griffin turns up at the estate of Sir Jasper Herrick, having been missing for five years and presumed dead, but in fact having been suffering from amnesia. Griffin led an expedition that uncovered a source of diamonds in Tanganyika but was abandoned there by Sir Jasper. He now demands his share of the proceeds from the expedition but Sir Jasper has misappropriated it all and has Griffin thrown off the grounds. Wandering, Griffin comes to the house of the eccentric Dr Drury who persuades Griffin to become his first human test subject in an invisibility experiment. Invisible, Griffin then proceeds to terrorise Sir Jasper, demanding not only what is rightfully his but also Sir Jasper’s house and daughter in marriage.

This was the fourth and last of Universal’s Invisible Man sequels, excepting for the Abbott and Costello team-up. (See below for other Invisible Man titles). Of all of Universal’s Famous Monsters sequels – the Frankenstein, Dracula and Mummy films – the Invisible Man series was actually one that sustained itself quite inventively. All the other monster series exhausted themselves in tired formulaic repetition by the fourth entry or even sooner. This however remains a likably good film, which is something that one has to stretch to be able to think of saying under the most optimistic conditions about any other Universal monster sequel from the 1940s.

The Invisible Man’s Revenge has little connection to the preceding films. It does star Jon Hall as the invisible man, a role that Hall also played in Invisible Agent (1942), although the character here has a different name. The invisible man here is named Griffin, although is not related to the invisible man Griffin from either of the first two films. This is in fact an original story of its own rather than a seqiel.

The story takes its time to get going – in a film only 78 minutes long, it is fully 20 minutes before we have an invisible man and then it has to swing a contrived plot device about he seeking shelter at the house of a scientist conducting invisibility research and agreeing to become a test subject.

However, the film is well directed by former serial director Ford Beebe. There are some good invisibility effects with the invisible man splashing the likes of water and flour on his face at various points. As with The Invisible Man (1933) and with The Invisible Man Returns (1940), there is a great deal of humour made out of English provincials. Leon Errol as the invisible man’s visible assistant gives a very funny performance – the invisibly assisted darts game in the pub is a comedic gem. John Carradine is also rather funny as the mad scientist of the piece with a lab full of invisible parrots and dogs that he nonchalantly treats like his pets.