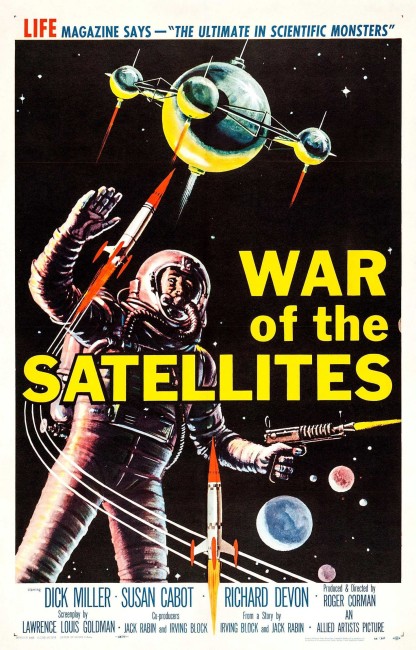 Project Sigma has been trying to launch manned satellites but each of the satellites is being destroyed as they hit an invisible energy barrier in orbit. A cylinder containing a message written in Latin lands, warning that humanity must be prevented from reaching out into space. The United Nations dismisses this is a hoax and Sigma head Dr Van Ponder is given more funding to build a better satellite. The aliens respond by blowing up Dr Van Ponder’s car. Just as it is announced in the UN that Van Ponder has been killed, he walks into the assembly alive and well. The Sigma project proceeds but Van Ponder is now controlled by an alien entity that does everything it can to sabotage the launch. Astronaut Dave Boyer and others start to become suspicious when they see Van Ponder being burned and not harmed or creating doubles of himself.

This was one of the early films from cult director/producer Roger Corman. Corman started out in the 1950s where he made a number of quirky B movies including the likes of It Conquered the World (1956), Attack of the Crab Monsters (1957), Teenage Doll (1957), Teenage Caveman (1958) and The Little Shop of Horrors (1960). He gained a critical respectability with his colour production of The House of Usher (1960), which led to a series of Edgar Allan Poe adaptations throughout the 1960s. (See below for Roger Corman’s other films). In the decades since, Corman has become a prolific producer of B movies, founding studios such as New World Pictures, Concorde and New Horizons with his name appearing as producer on over 400 films. Corman can be seen on screen in several scenes here – he’s the technician wearing a headset at mission control.

Certainly, the public fascination with Sputnik influences the film. The desire to capitalise on the word ‘satellite’ pushes the film out of what you feel like was its natural state. At heart, War of the Satellites is an alien invasion film – anytime else it would be akin to The Space Children (1958) or The Cape Canaveral Monsters (1960) with aliens attempting to sabotage a rocket launch. Or perhaps one of the aliens possess the dead films we had shortly after this with Invisible Invaders (1959) and Plan from Outer Space (1959).

In the need to wind in something to do with satellites, the film has a plot where aliens, who are like a more severe form of Michael Rennie in The Day the Earth Stood Still (1951), want to prevent humanity from going into space. The idea that space was a frontier that was hostile to humanity or too difficult to venture out into plays out in a number of other SF films of the era – The Quatermass Xperiment (1955), The Angry Red Planet (1959). Thus we end up with a series of manned satellite launches that are being prevented by never-seen aliens. None of the satellite launches were ever manned in real-life but this doesn’t seem to matter to Corman and co. There is also the improbable idea that three different rockets have to be launched, each with a piece of the satellite aboard, which is then pieced together in space.

War of the Satellites is an average Roger Corman film. It disguises itself well and doesn’t look that cheap, despite using a series of terrestrial hallways and rooms to represent on board the ships. On the other hand, there is not the quirkiness that lifted other similar Corman works of this era like It Conquered the Word, Not Of This Earth and Attack of the Crab Monsters.

There is some mildly sinister effects with Richard Devon taken over by the aliens where he demonstrates the nifty ability to create doppelgangers of himself and completely regenerate his hand after it is crisped by a Bunsen Burner. It is more amusing in the latter scenes watching him disposing of people he has killed by dumping them out the ship’s airlock where the airlock has no inner pressure doors, is just a hatch in the floor that appears to open straight into space.

The lead is played by Dick Miller in his tenth role for Corman in the space of three years. Miller of course would become a cult actor after appearing in two of Corman’s classic films with A Bucket of Blood (1959) and The Little Shop of Horrors (1960).