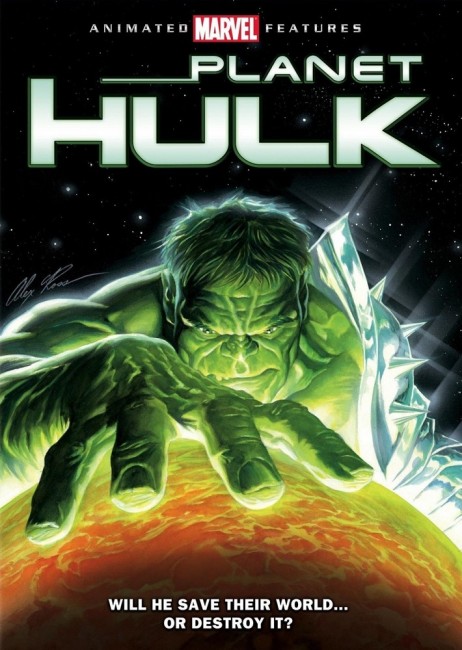 Because of the vast destruction he has caused, The Hulk is placed on a spaceship by other superheroes and exiled from Earth. On board however, Hulk tears free of his confines, causing the ship to go off-course and through a wormhole to crashland on the planet Sakaar. There he is captured by the soldiers of the Red King and imprisoned with a group of other aliens. The prisoners are forced to fight various nemeses in the arena for the Red King’s amusement with the promise of winning their freedom. Hulk’s brute strength makes him a champion. The people of Sakaar believe he is the predestined Sakaarson who will rise up and free them from oppression but Hulk wants nothing of this role.

Marvel Comics have had huge success on the big-screen from the beginning of the 2000s onwards. During this same period, DC Comics also enjoyed success with their dvd-released DC Universe Original Animated Movies. This was something that Marvel sought to replicate in a series of animated films, although these have only enjoyed sporadic success, far less than the DC counterparts. The Marvel animated films include Ultimate Avengers (2006), Ultimate Avengers II (2006), Doctor Strange (2007), The Invincible Iron Man (2007), Next Avengers: Heroes of Tomorrow (2008), Thor: Tales of Asgard (2011) and Iron Man: Rise of Technovore (2013). The Incredible Hulk had several outings amongst these beginning with Hulk Vs. (2009); this was the second Hulk film.

Planet Hulk (2006-7) was an event storyline that ran through thirteen issues of The Incredible Hulk and details Hulk’s becoming a champion in the arena on the planet Sakaar. The same storyline was also incorporated into the later live-action film Thor: Ragnarok (2017), albeit undergoing a number of changes the least of which was the indignity of being rewritten in as part of a Thor film (principally because the MCU doesn’t hold copyright control over The Incredible Hulk and refuses to make a standalone Hulk film). The version of the story told here is much more faithful to the original comic-book plot, the major exception being that Beta Ray Bill (taken from Thor comics), one of the opponents in the arena, becomes a replacement for The Silver Surfer in the original (another character the filmmakers didn’t have copyright control over).

Sam Liu subsequently became one of the most prolific directors among the DC Universe Original Animated Movies. I am not a huge fan of Liu’s work there where he seems to deliver indifferently tossed off superheroics that lack much impact. On the other hand, I was impressed with his work here. It is hard to quite pinpoint why his work between the two comic-book universes differs so much. (It may simply be that Liu’s prolific subsequent output has slipped into an ennui through his workaholic regimen – making an average of two films a year). Here though he seems invested in the superheroic action and takes the time to make it seem exciting and engaging.

The Planet Hulk storyline was a major event in Marvel Comics and has seen assorted spinoffs, collected editions, What If? variations and been the subject of two films. Equally, when you see it stripped down to a 81 minute film here, it seems not too much more than the idea of The Incredible Hulk crosshatched with Gladiator (2000). (Peculiarly we never see Bruce Banner throughout). The story is a planetary adventure that falls into easy storytelling tropes – The Hulk is seen as a predestined saviour, while his story arc in the arena is that of Spartacus (1960) – the slave forced to fight in the arena who inspires an uprising and comes to topple an empire.