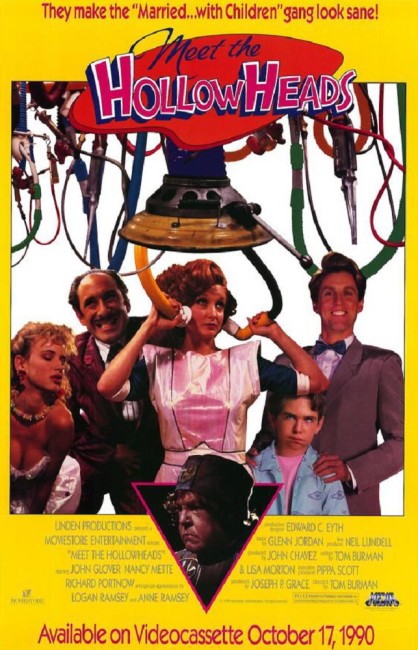 Henry Hollowhead, a meter reader with the United Umbilical Company, calls his wife Miriam to say that he is bringing his boss Martin Crabneck home for dinner that night. Meanwhile, Miriam is shocked to find that their son Billy has been using live animals in a splatsbury game and that 14-year-old daughter Cindy is using softening gel while going out on a date. When Henry arrives home with Crabneck, Crabneck starts making aggressive moves on Miriam. In trying to fight Crabneck off, they accidentally kill him with the hard radiation cooker. They face a dilemma about what to do with the body, as they do not want the police to find that they keep their grandfather alive in the basement.

It has been commented that any work of science-fiction that tries to be truly alien would, in losing all human referents, be incomprehensible and a total artistic disaster. Life on the Edge may not be wholly alien or incomprehensible but it comes very close. And not too surprisingly, it was an artistic disaster. The studio had no idea what to do with it and tried to salvage it by renaming it Meet the Hollowheads then dumped it onto video shelves after a five-minute cinematic release.

The film’s director was celebrated makeup artist Tom Burman, who created work for the likes of Invasion of the Body Snatchers (1978), Cat People (1982), Prophecy (1979), Heartbeeps (1981) and The Beast Within (1982). Needless to say, that with the film’s failure, Tom Burman failed to find any takers for a second feature and subsequently returned to the makeup trade.

Pigeonholing Life on the Edge/Meet the Hollowheads is almost impossible. It gives the impression of having taken its inspiration from parts of Brazil (1985) – particularly the scenes with Bob Hoskins’ plumber. The sets seem like Playschool sets designed in cartoonishly kitsch primary colours mixed up with punk coiffs and hairdye jobs like something out of a 1950s science-fiction film gone wrong. (Although the same design scheme seemed to be used the same year with the remake of Dr. Caligari (1989) from Stephen Sayadian).

Whether what we are seeing is a future society, a humanoid alien society or what, we never given any clues about. People apply ‘softening gel’ and play something called a ‘splatsbury game’, keeping one’s grandfather in the basement appears to be a crime, the titular ‘edge’ is a place of danger on the outskirts of the city that may or may not exist. What any of this means or refers to we never find out. This type of name-dropping as though the words have significance can make for fascinating cultural texture when used as a background in a film, for example Quintet (1979) and The Salute of the Jugger/The Blood of Heroes (1990). However, when this suffices as the main plot it is entirely frustrating.

Certainly, the visual bizarreness of the film is often unique in a surreal sort-of way, particularly the food preparation scenes – a mid-afternoon snack involves the dicing of insects and their being rolled in half-inch thick strips of pastry with the result being spread with blue goo and clipped together with what looks like a three-inch hatpin; and for the main dinner, part of a struggling pink tentacle that is kept in a kitchen cubicle is cut off and then cooked with what seems like a portable x-ray lamp; while son Lightfield Lewis plays a musical instrument that looks like a skinned chicken connected to three trombone tubes and a mini-keyboard.

Unfortunately, Life on the Edge/Meet the Hollowheads never mounts to anything its inventivity of design ever touches. Tom Burman may have intended the film as a slice-of-life view in on something alien. In its more successful moments, the film teeters on the cartoonishly surreal but mostly the only tone it achieves is low pantomime farce. At its best, the film makes one scratch their heads and wonder what is going on; at its worst, it is infuriating.