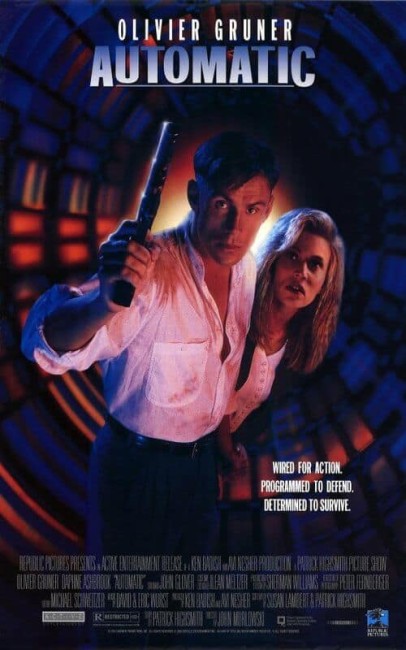 Goddard Marx, a designer at the Robgen corporation, is in danger of having the funding pulled from his Automatic project, a lifelike android designed for home security. Robgen CEO Seth Barker invites PR assistant Nora Rochester to his office and tries to force himself on her. As she tries to fight him off, an Automatic comes to her aid but in so doing it accidentally kills Barker. When Marx finds out about this, he seeks to blame the incident on the protest mobs outside the building that are demonstrating against the replacement of human labour with mechanical. When Nora and the Automatic refuse to go along with this, Marx tries to have them eliminated. The two of them try to survive and fight back as Marx employs a platoon of hired soldiers to hunt them through the corporate building.

The android and its close cousin the cyborg have become one of the prevalent themes of the sf/action hybrids of the 1980s and 90s. Portraits here have invariably taken either of two models – the amok or killer android as represented by The Terminator (1984) and the android/cyborg that is caught between its programming and its humanity as represented by RoboCop (1987).

Automatic is a dull regurgitation of the Robo-Cop model. In all regards, it is dreary – the action never rises above B video-fodder routinenness. As science-fiction it is negligible – the android finds it far too easy to defy his programming and suddenly becomes far too intuitive at decision-making to make for a believable portrait of an AI. There is a potentially imaginative scene where the android walks in as his boss Stanley Kamel is forcing himself onto Daphne Ashbrook not understanding what is happening, where she calls for help, Kamel orders him not to and the android stands conflicted about which way to turn. The scene ends with the android inadvertently killing its corporate creator – a much more interesting film would have explored these choices rather than gone the route of having the android make the right decision by accident.

However, Automatic has no other ambition to be anything other than a B-budget copy of Die Hard (1988). French martial artist Olivier Gruner plays the android – a very similar role to the one he played in the much superior Nemesis (1993) – and one that seems to suit his minimal acting abilities.