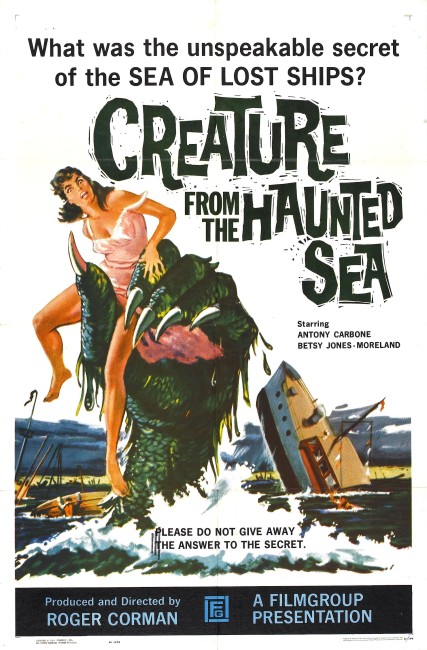 Gangster Renzo Capetto is hired by several Cuban exiles to smuggle a strongbox of gold into Cuba to finance the overthrow of Castro. They set out aboard a yacht. Also aboard is American agent XK150, who is posing as mobster Sparks Moran. Renzo is intending to steal the gold and during the journey, he starts throwing the Cubans overboard, faking things to make it appear that they have been killed by a legendary sea monster. Problems occur when the real sea monster appears and starts claiming victims. Renzo decides to detour to Puerto Rico where he sinks the strongbox in a lagoon, intending to retrieve it later. On shore, the crew are tempted by the local women. As the same time, the monster thwarts the various plans of Renzo and the Cubans to dive and retrieve the strongbox.

Creature from the Haunted Sea is one of the films from the legendary Roger Corman. Corman had begun in the 1950s directing a number of quirky and entertaining B-budget movies, including Day the World Ended (1955), It Conquered the World (1956), Attack of the Crab Monsters (1957), Not Of This Earth (1957), Teenage Caveman (1958) and The Wasp Woman (1959). Towards the end of that decade, Corman in collaboration with screenwriter Charles B. Griffith made a series of droll, absurdly funny comedies with the likes of A Bucket of Blood (1959) and the cult classic The Little Shop of Horrors (1960). After this point, Corman’s budgets started to get noticeably better (and his films moved into colour), with he attaining a degree of critical acclaim with his series of Edgar Allan Poe adaptations beginning with The House of Usher (1960). In later years, Corman retired from direction and founded both New World Pictures and Concorde/New Horizons, producing hundreds of B-budget films.

Creature from the Haunted Sea is usually dismissed as one of the Roger Corman’s cheapie monster movies. In fact, it belongs more in the period of A Bucket of Blood and The Little Shop of Horrors where Corman and Charles B. Griffith were foisting their experiments in the wilfully absurd on the public. Within the first few minutes you have no idea what sort of film you are watching – the title suggests another 1950s Corman monster movie, instead we get something that looks like an eccentric spy caper comedy with beatniks mouthing spy cliches in deadpan, before the film segues into a series of animated credits with mobsters and villagers being chased around by a monster.

Griffith writes absurdly deadpan dialogue: “Little did they know that I, Sparks Moran, was an American agent … My real name was XK150.” Or XK150’s hilarious little biographies of the other characters: “In 1940, he was involved in an unsuccessful attempt to nominate Benito Mussolini for the Republican ticket. During the War he was rejected by the Navy, The Marines and the SS.” Later XK150 tells us: “He didn’t sound like a Cuban to me … so I decided to knock out the leader of the Cubans with a fish I had on the end of my line” and announces his plan: “We’ll wait for nightfall and then jump off and swim through shark-infested waters so no-one will follow us.”

I liked the sheer silliness of the scene where mobster Anthony Carbone tells moll Betsy Jones-Morland to sing a song while sitting on the prow of the boat and out of nowhere a piano starts to accompany her and then the boat is invaded by pirates and her song continues on throughout the middle of a shootout.

However, Creature from the Haunted Sea gets very silly – like when it comes to images of secret agent Edward Wain/Robert Towne reporting to his controllers with a radio set made out of hotdogs and pickles. The constant idiocy of the main characters – Anthony Carbone who delivers his performance in a Bogart drawl, Beech Dickerson constantly making animal noises – becomes tiresome. Eventually – about the point of Beech Dickerson and a woman running around the jungle conducting a romance of animal noises, various spies gathering around a phone on the beach, and particularly the tedious stuff with the crew marrying various native girls – the initially amusing absurdities collapse into a film that is being silly for the sake of it.

Certainly, The Little Shop of Horrors had the same kind of deadpan silliness, but Creature from the Haunted Sea is an occasion where Corman and Griffith fail to make the same thing work a second time. You get the feeling that Roger Corman and his cast went to Puerto Rico with cameras and made things up as they went along. The monster, when it does turn up, is fairly laughable – like a tree trunk with pieces of seaweed draped off it and eyeballs made of marshmallows. The very last image in the film is of it burping.

The actor playing the narrating Agent XK150, billed as Edward Wain, is in fact later-to-be director and Oscar-winning screenwriter Robert Towne, who subsequently wrote works like Chinatown (1974), Shampoo (1975), Greystoke: The Legend of Tarzan, Lord of the Apes (1984) and the first two Mission: Impossible films. There is an amusing story behind how Towne ended up in the cast. He was writing the script for Corman’s Last Woman on Earth (1960), which was shot back-to-back in Puerto Rico along with Creature from the Haunted Sea. Corman, the notorious penny pincher, cut the cost of taking a screenwriter with him by getting Towne to double as an actor in both films.

There are claims made on the Internet Movie Database that Creature from the Haunted Sea is a remake of the Roger Corman-Charles B. Griffith film Hawaiian gangster film Naked Paradise (1957) – although this is not the case, Naked Paradise doesn’t even feature a monster. The IMDB also claims that Creature from the Haunted Sea was remade as Charles B. Griffith’s spoof monster movie Up from the Depths (1979) and the cheap Demon of Paradise (1987), although both of these claims are untrue. Even a cursory glance at the entirely different plot descriptions for all four films would demonstrate this to be the case.