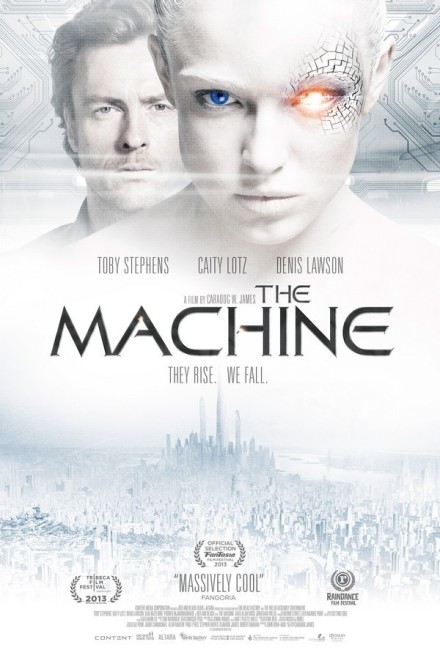 In the future, England is in a cold war with China. Dr Vincent McCarthy is a researcher with the Ministry of Defence, having developed sophisticated prosthetics and brain implants that allow soldiers with severe injuries to regain use of their faculties, although these are not without problems. He recruits the brilliant young Ava to the project after being impressed with her work in artificial intelligence. He confesses to her that he is seeking to find a way of recreating the mind of his brain-damaged daughter Mary inside a machine. Ava is then shot by a Chinese assassin seeking to sabotage her work. However, Vincent has scanned Ava’s mind and behavioural patterns into the computer. He loads these into an android body and brings it to life. The Machine, as he calls it, slowly develops a growing sophistication in the ways that it deals with the world and understands phenomena. As Vincent realises that what he has created is more than just an imitation of life, his superiors wants The Machine’s consciousness excised and it repurposed as a military weapon.

The Machine was the second film from Welsh director Caradog James. James had previously made Little White Lies (2006), a non-genre work about racism and subsequently went on to make the horror film Don’t Knock Twice (2016), as well as produced the deadly videogame film The Call Up (2016). The Machine had its premiere at Tribeca and did the rounds of a number of film festivals.

My initial impression of The Machine is that it was the once promised English-language remake of the French La Machine (1994) about a device that allows a psychiatrist and a serial killer to swap bodies only for the latter to take over the former’s life. A glance over the dvd cover proves that this is not the case and The Machine is an original work. The second impression one had is that it was a copycat timed to come out around the same time as the more high-profile Transcendence (2014) in that both films cover similar themes. This turns out not to be the case either as The Machine was released some time earlier. My disappointment with Transcendence caused me to take my time to find the enthusiasm to dip into The Machine. All I can say is that I wish I had done so earlier.

The Machine has you captivated from the opening scenes. We meet John Paul McLeod who has a large chunk of his head missing and is apparently brain dead until Toby Stephens activates an implant that brings him to life. He is then placed through a series of cognition tests before he unexpectedly grabs a soldier’s gun and slaughters most of the personnel present. In the next few scenes, we see Toby Stephens sitting through a series of Turing Tests and then recruiting Caity Lotz to his program (despite the fact that her A.I. made the wrong choice).

In the next scenes, we see the two of them giving Sam Hazeldine a series of prosthetic arms and placing these through tests as he touches objects, crushing marbles and sifting sand with them before unexpectedly asking to touch Caity Lotz’s hand. One of the great pluses of these scenes is Toby Stephens whom I have regarded as a hugely underrated actor more deserving of a far greater profile than he has. Here he does a mix of cool detachment and dashing handsomeness to perfection.

You feel that the script is hurrying through scenes to get where it wants – in particular, Caity Lotz’s murder and its aftermath is passed over quickly, while the construction of her android body is not even depicted before we are next seeing it being activated. The film’s most absorbing scenes are those with The Machine coming to life and being run through a battery of tests. There is an unnerving scene where a container is put over her face and a spider (the human Caity’s greatest fear) placed inside it as she reacts in fear, as all the while Toby Stephens and Denis Lawson detachedly talk in the foreground. Or where a lab assistant is sent in wearing a clown mask (another of her fears) and she uncomprehendingly reacts by killing him.

Caradog James creates a superb visual poetry to the scenes with the android splashing in puddles in the empty hangar and then breaking into a dazzling dance routine, which are made all the more amazing by the fact that her body is lit up from inside by flashes of coloured electronics. There is also a fine scene where she conducts a series of grimaces and Toby Stephens tells her she should smile and she responds by saying “I am smiling.” (It is in this that the film hits on one of the greater realities about an android – in Star Trek: The Next Generation (1987-94), Data had a problem with contractions (something even a contemporary word processor is capable of translating) and yet had no trouble with facial expressions. In reality, it would be the other way around – an A.I. could easily deal with grammar and colloquialisms but would have far greater difficulty trying to work out which sets of facial muscles would be more appropriate to activate as a reaction to a given emotional situation).

The failing of The Machine is that it creates a fantastic first and second act but falls apart when it comes to the third act. Denis Lawson gives a wonderfully nasty performance that makes you loathe him intensely – there is a particularly fascinating scene where he tries to persuade Caity Lotz to kill a Chinese spy in the same tones that one might talk down to a child – but the film still falls into cliches of sinister military thinking only of the weapons potential of a discovery. Up until this point, The Machine was being everything that Transcendence and the equally disappointing Chappie (2015) should have been. It is as though the backers came in – not unlike the way the military commandeer the android in the story – and demanded that the film have an identifiable villain and end on a cliche action climax where the machines turn the tables on the humans. A shame as it mars what is otherwise three-quarters of a really good science-fiction film. Ex Machina (2015) came along a couple of years later and did the basic plot here to perfection. (For a more detailed overview of the genre see Films About Artificial Intelligence).