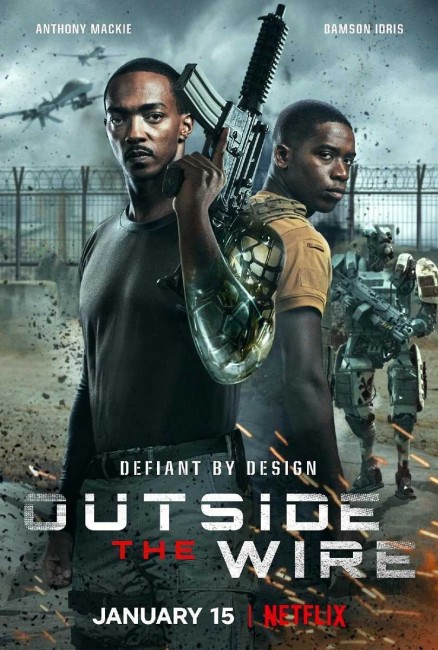 The year 2036. The USA is acting as a peacekeeping force in Western Europe, which has collapsed into a war zone. Lieutenant Thomas Harp is a US drone pilot who defies orders to fire on an enemy vehicle he suspects of being a missile launcher, killing two marines but saving a number of others. He is court martialled and as punishment is sent to the frontline of the war zone. He is assigned under the command of Captain Leo before discovering that Leo is an android. Leo takes Harp with him on a mission outside the wire and into the anarchy of the streets of Krazny. Leo is determined to track down rebel leader Viktor Koval who is in the process of getting his hands on former Soviet nuclear weapons and the potential threat that he will launch these at the US. As Harp accompanies Leo through the war zone, it becomes increasingly apparent that Leo has gone rogue in his programming.

Outside the Wire comes from director Mikael Håfström. Håfström had made various films and tv series in his native Sweden, including genre works like the tv mini-series House of Shadows (1996) and the film Drowning Ghost (2004). He made his English-language debut with the thriller Derailed (2005) and went onto the Stephen King-adapted ghost story 1408 (2007), followed by the historical drama Shanghai (2010), the exorcism film The Rite (2011) and the non-genre Sylvester Stallone-Arnold Schwarzenegger prison break film Escape Plan (2013). Outside the Wire may have been intended for a theatrical release but ended up being released to Netflix in January of 2021 where it proved a modest hit in ratings figures.

As the fascination with Artificial Intelligence and androids has heated up on screen, there have been a number of works that sit at opposite extreme to Ex Machina in the bone-headedness of their treatment. You can point to the ridiculousness of Life Like (2019) with its absurd twist ending or the cheap tattiness of Automation (2019). There were also comedy treatments such as Jexi (2019) about an annoyingly intrusive artificially intelligent mobile app, Superintelligence (2000) where a vastly powerful A.I. develops a fixation with Melissa McCarthy and Jean Pierre Jeunet’s appealingly eccentric BigBug (2022).

Outside the Wire is another entry in the A.I. field that is only notable for how absurd a treatment it is. Mikael Håfström appears to have zero interest in A.I. themes and decides to make an action movie instead. What we end up with is something akin to Ex Machina by way of Training Day (2001), albeit where Denzel Washington’s corrupt cop is now played by Anthony Mackie’s rogue android and LAPD crime-ridden streets have been substituted for a European war zone.

This is a film that makes zero effort to depict an android or artificial intelligence in a believable way. One has no problem with the idea that Anthony Mackie is such a sophisticated machine that he is indistinguishable from human but there are soon major plausibility issues with the film’s scenario. As I have said elsewhere, it seems unbelievable that one android can exist in isolation without a culture of technological development behind them – testing of prototypes, public reaction to them, the copying of such designs by other industries. It would be like an airplane manufacturer suddenly introducing a fully formed 747 out of nowhere without any Wright Brothers or development from the biplane to the jet beforehand.

Anthony Mackie’s android is no different to a regular human except when he takes off his shirt and reveals some glowing lights inside a hollow skeletal torso. We are told he is only three years old but there is no explanation of how such a being would suddenly become conversant with human ways. Mackie acts as a human in almost every way – he has a sense of humour and makes sarcastic asides with Damon Idris, which are things that require a sophisticated understanding of human speech and nuance. At one point, he even calls Idris’s wife a ‘hottie’ demonstrating sexual desire and/or the ability to make judgements about human standards of beauty/desirability, which are things that would surely have no purpose in a machine. Any halfway reasonable screenwriter could have found ways of explaining such things – that Mackie is really a cyborg or that his consciousness comes from Mind Upload or a simulated personality – but to have them simply sit on their own makes the film ridiculous.

There is so little interest displayed in these matters that you could almost entirely take Anthony Mackie’s being an android out of the film and write the character as a rogue military/intelligence officer and it make no difference to anything that happens throughout, Not to mention that the film quickly heads into the cliches of an A.I. designed for military purposes starting to think for itself before going amok – see films like Short Circuit (1986), Class of 1999 (1990), Eve of Destruction (1991) and Automation. When you think about it, the capacity of thinking for itself is one of the least likely qualities you would to install in a military android, what you would want is something more like the killer robots we see throughout that are simply capable of recognising targets and shooting at them.

Certainly, Anthony Mackie, who has been proving a talented actor in the last few years, is a controlled presence on screen. And once Mikael Håfström gets him into combat, there are some exciting and kinetically visceral action sequences. None of that though disguises what is a stupidly written script on every other level.