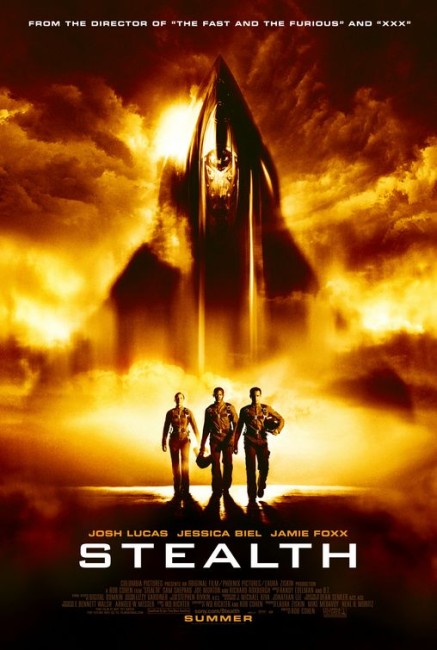 The near future. Lieutenants Henry Purcell, Kara Wade and Ben Gannon are three top Navy pilots who have been trained to fly the new Talon stealth fighter planes. Their commanding officer Captain George Cummings announces that they are to be joined by a fourth plane. This turns out to be an Unmanned Combat Assault Vehicle, which is powered by an artificially intelligent computer known as EDI (Extreme Deep Invader). While out on manoeuvres, EDI is struck by lightning and the AI goes haywire. While flying on a mission over Tajikistan, EDI disobeys orders and fires on civilians and then takes off on its own. The others are ordered to bring EDI back in one piece but it proves much more wily and inventive than they believed. At the same time, they also find that their commanding officer is playing a duplicitous game.

Not long after 9/11 and the Iraq War, I predicted that it would not be long before we started getting a whole series of American pro-militarist films. However, apart from the odd effort like Behind Enemy Lines (2001), Black Hawk Down (2001), The Kingdom (2007), Battleship (2012) and American Sniper (2014), there have been surprisingly few of these. Indeed, the spate of Iraq War films has been more on the side of the anti-war documentaries like Michael Moore’s Fahrenheit 9/11 (2004), Uncovered: The War on Iraq (2004) and Weapons of Mass Destruction (2004) and dramatic works like Lions for Lambs (2007) and Redacted (2007). Stealth is one belated pro effort to join the fray but even then it seems decidedly muted in its pro-militarism – while showing us lots of shining shots of fighter plans and aircraft carriers, it should also be noted that the film’s principal theme is of US war machines going out of control.

The screenplay for Stealth comes from W.D. Richter who has a long history in genre material as a writer and occasionally director with the generally intelligent likes of Invasion of the Body Snatchers (1978), the Frank Langella Dracula (1979), The Adventures of Buckaroo Banzai: Across the Eighth Dimension (1984), Big Trouble in Little China (1986), the cryogenic sleeper film Late for Dinner (1991) and the Stephen King adaptation Needful Things (1993).

Rob Cohen seems assured with action and effects sequences but is a director who more often than not only reaches for clichés that collapse into the laughable when he tries for drama. As expected, Stealth is no more than an assemblage of clichés taken from other films. There are all the aerial combat and out-manoeuvring sequences, as well as the plane theft plots, taken from Firefox (1982) and Blue Thunder (1983). Most of all though, there is the amok AI/artificially intelligent weapon theme taken from films like 2001: A Space Odyssey (1968) – there is even a scene with the AI eavesdropping on conversations that is remarkably similar to HAL 9000’s lip-reading scene – and Colossus: The Forbin Project (1969), as well as the Star Trek episode The Doomsday Machine (1967) and Star Trek: Voyager episode Dreadnought (1996). Cohen and W.D. Richter only regurgitate the clichés from these – Stealth is a film where the filmmakers should have sat down and watched Dark Star (1974), after which it is hard to ever view an amok AI/Doomsday Weapon story straight again.

The most bizarre aspect of Stealth is how it feels like two different competing stories. The first half is a standard Amok AI story a la 2001, Colossus, The Doomsday Machine et al. Cohen and W.D. Richter do a passable effort of setting up a series of scenes with the three pilots hunting the plane through the skies. However, the second half almost feels like another film altogether – here the model the film draws from is clearly Blue Thunder where the decent heroes manage to redeem the hi-tech plane and turn it around to fight on the side of good as they set out to root out the corrupt conspiracy within the military. Here the initial premise involving an AI stealth fighter gone amok jumps tracks entirely – indeed, the AI amok menace is rendered irrelevant and the real threat is the corrupt general and the shadowy Washington politico who acts as his backer.

Stealth almost feels like the film started out as one type of story and was rewritten part way through to accommodate a more upbeat view of American military than the initial premise of weaponry going amok. Certainly, the conspiracy element is ill conceived and we are never offered any reasons as to why it exists or what it is trying to achieve. Not entirely done with piling this on, the film decides why not and throws a whole other Behind Enemy Lines subplot with Jessica Biel stranded on foot in North Korea.

Everything in Stealth is driven by clichés. It is a film where Rob Cohen seemingly operates by a dictum that requires the provision of a series of spectacular set-pieces every few minutes. The film certainly has some good visual effects sequences – alas Cohen has filmed them all with blurred, seemingly handheld aerial camerawork and it is too difficult trying to follow what is going on to actually be impressed by the effects. The best sequences are actually the ones that do not involve fighters flying at high-speed – like a hair-raising sequence where Jessica Biel hits her ejector seat and parachutes down amid a rain of burning debris that then starts setting her chute alight; and a sequence where Josh Lucas rendezvouses with the refuelling plane, only to have the hiding EDI ignite a ring of spilt fuel in the air around him. Frequently though, Stealth feels like a film where Rob Cohen is trying to be spectacular for its own sake.

What makes the film almost impossible to believe at times is the way it is swayed towards presenting a kind, caring depiction of the US Armed Forces. The only people that are ever killed throughout are bad guys like North Koreans, terrorists and the villainous forces conspiring within the US government. The film is ridiculous in its depiction of a surgical strike wherein a fighter fires a missile vertically down onto an office block, which then tunnels down through the floors to only detonate and kill the bad guys on one particular level. Hero Josh Lucas has a speech about the triumph of the human spirit over the machine, yet the film’s presentation of arsenals of nuclear weapons and automated missile attacks using hi-tech targeting systems surely make the notion of old-fashioned 19th Century styled warfare, which was fought hand-to-hand between men on horses, farcically obsolete. In its self-congratulatory, flag-saluting parade-day fervour, what Stealth resembles more than anything is an A-budget version of one of Royal Oaks’ usually direct-to-video action films – the likes of Crash Dive (1996), Steel Sharks (1996), Surface to Air (1997), Black Thunder (1998), Freedom Strike (1998) – that make a virtue of using real US Armed Services footage and holding an unquestioningly red, white and blue attitude towards the rightness of its use.

Stealth was billed with Jamie Foxx as its lead. In fact, this was the first film that Jamie Foxx chose to make after winning a Best Actor Oscar for Ray (2004) – one badly suspects that Foxx is starting to fall into some of the disastrous follow-up career choices that Halle Berry made after winning her Oscar. Maybe Foxx realised what second-rate material he was cast in and asked to be killed off halfway through. This is about the film’s only surprise – that Jamie Foxx, for all his top-billing, gets killed off and is not the hero. He seems to give a performance that coasts through, playing his role as though he were channeling the motormouth persona of Martin Lawrence. The film gets a much better showing from Josh Lucas and Jessica Biel, two stars clearly on the rise. During their personal scenes, they do exhibit star presences and between them easily dominate the film and upstage the seemingly disinterested Jamie Foxx.