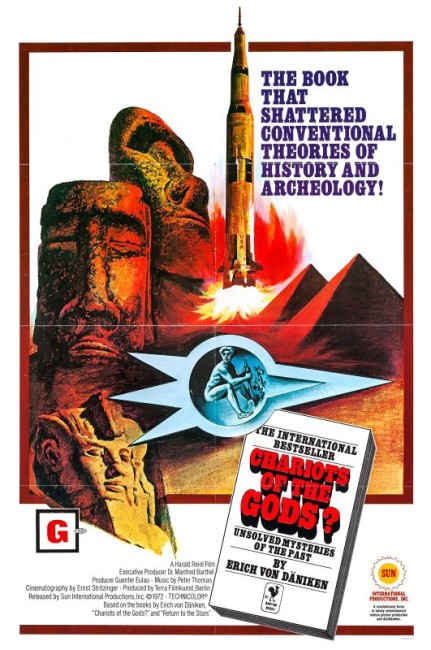 Erich von Daniken is a fascinating figure in the realms of Fringe Science. Born in Switzerland in 1935, von Daniken came to international fame with the publication of his book Chariots of the Gods (1968) in which he argued that aliens had come to Earth over the millennia and had influenced the ancients. Evidence of such contact, he claimed, can be found in ancient monuments, inscriptions, illustrations and references in historic texts. Here von Daniken argues that many works of ancient architecture – The Pyramids, the heads at Easter Island, Stonehenge and various references in The Bible – can be explained by or make reference to these alien visitations. Von Daniken’s work was ridiculed by historians and archaeologists but Chariots of the Gods proved a best-seller and inspired a fad throughout the 1970s primarily for Ancient Astronauts theory and pseudo-archaeological interpretation. These ideas have bled into much modern science-fiction.

Between 1968 and the present, Erich on Daniken has published a further sixteen books about Ancient Astronauts. Several books have written refuting von Daniken’s claims, picking apart wilful omissions, the selective interpretations he uses to make his case, even blatant fictionalisations of fact throughout his books. Perhaps the most unwittingly telling comment in the entire film here is the typo (?) on the opening credits that notes that the film is ‘based on the novels by Erich von Daniken’, which is exactly what we have – a work of historical fiction.

It should be pointed out that in his previous career as a hotel manager, von Daniken had been convicted and jailed on multiple counts of fraud and embezzlement from his places of employ. (Indeed, his second book was written while he was serving a jail term in Switzerland). Von Daniken’s defence to these charges in court was that he was borrowing the money to allow him to travel internationally and visit the sites mentioned in the book. Today, von Daniken is still publishing, maintains a website (www.daniken.com) and even opened a Swiss theme park based around his ideas.

This is a West German-made documentary based on Erich von Daniken’s book. The documentary starts out making an admirable effort to credibly establish its premise. It opens on shots of the Mount Palomar observatory, talking about the number of stars in the sky, the mathematical breakdown on how far a light year is to scientists talking about the possibility of extra-terrestrial life. (Here the documentary makes a quick dig at the orthodoxy of the scientific establishment by pointing out that they claimed at the time of the invention of the train that travelling faster than 20 miles-per-hour would be damaging to the human body). The film then jumps tracks to talk about cargo cults and the examples of natives on the islands of the South Pacific during World War II who built shrines to the airplanes of pilots after they had departed. From this, the film clearly wants us to draw analogy to ancient humanity building shrines to aliens in the aftermath of visitations.

Erich von Daniken argues in exactly the same that creationists and conspiracy theorists do – by claiming that the standard interpretation of facts offered by mainstream scientists and historians is false where pieces of evidence are then cherry-picked or anomalies pointed to in order to build evidence for a pre-supposed thesis. Von Daniken (and the film) ransacks history for every example in ancient texts of people ascending into or from the sky in chariots, or of beings depicted with shapes surrounding their heads and cite these as proof of extra-terrestrial contact or the appearance of flying saucers.

Everything is plundered – from sections of the Epic of Gilgamesh, the Book of Ezekiel, friezes in Yugoslavian churches to carvings by the Maya and Aztecs. Endemic of the selectiveness of von Daniken’s interpretation is the theorising that Sodom and Gomorrah in the Old Testament was destroyed by a nuclear explosion. This selectively takes from some parts of the story and conveniently ignores other parts like where Lot’s wife was turned to salt because quite clearly some parts of the story – ie. those that support von Daniken’s case – are intended as literal and others as figurative.

There seems no room in Erich von Daniken’s interpretation where the ancients could simply imagine someone flying or descending from Heaven, no possibility that they could have fancifully drawn beings wearing headdresses or surrounded by halos as part of their view of what an ethereal being should be. Despite being a documentary, this is exactly what Chariots of the Gods is not. A documentary will look at something and offer voices on both sides of the case. Conveniently omitted from the film are any archaeologists or historians who might offer up a counter view to the film’s thesis. (For that matter, the film never interviews any scientists or archaeologists who come out in support of von Daniken’s conclusions, at most some Russian scientists who are certain that extra-terrestrial life exists). What we have is not an unbiased examination of evidence but a film that is showing us selective evidence to support a pre-supposed thesis.

The other piece of faulty reasoning that von Daniken conducts is to take every historical mystery where we don’t know an answer or is at least surrounded by an archaeological question mark – how the Pyramids were constructed, what the Nazca Lines represent, how Piri Reis supposedly depicted the outline of Antarctica in his map of 1513, how the moai at Easter Island were made, how every vast dolmen and obelisk left by the ancients was quarried – and says “obviously because there is no answer, it must mean that these were quarried/airlifted by Ancient Astronauts.”

The reality is that these are overly simplistic explanations. Much has been researched into The Pyramids and credible theories constructed and even demonstrated as to how it would have been possible for the Ancient Egyptians to build them, not to mention the uncovery at surrounding areas of the various tools and implements used in the construction. The Piri Reis map, which supposedly shows the outline of Antarctica from the air at a time when the region had not been mapped, is said to actually be the outline of South America where the cartographers simply drew it along the bottom of the map because they did not have room on the side.

There also seems something oddly absurd to von Daniken’s assumptions. First we have a species of alien that is enlightened enough to travel across the galaxy, then realise that they had created a cargo cult but rather than do the enlightened thing and dispel such false worship, instead seem so egotistical as to encourage this by helping airlift huge chunks of rock around to help the ignorant natives build monuments to them. It is less like an enlightened civilisation than when dictators like Saddam Hussein and Josef Stalin came to power and demanded that statues of themselves be erected everywhere.

The sole scene where Chariots of the Gods almost makes its case is in screening some real-life footage from the construction of the Aswan Dam in Egypt and the vast engineering project undertaken between 1964 and 1968 to relocate the monuments at the temple of Abu Simbel. Looking at the vastness of the modern engineering project being undertaken, you do end up wondering for a time if it took modern technology so much effort, exactly how the Ancient Egyptians built them with only primitive tools.

The disappointment of the film is that it is only an illustrated thesis. I was kind of hoping we might have gotten some footage of Erich von Daniken scouring these ruins himself. Alas, he, and almost any talking head offering an opinion, is almost entirely absent from the film. To the film’s plus side, it does tour the globe and visit some of the real locations and some very out of the way places, and all of the scenery is beautifully photographed. Bizarrely enough, Chariots of the Gods did end up being nominated for the Best Documentary at that year’s Academy Awards.

The film was later shown in an edited form in the US as In Search of Ancient Astronauts (1973) with narration from Rod Serling and interviews with a number of scientists including Carl Sagan. Director Harald Reinl went onto make one other documentary based around Erich von Daniken’s books with Mysteries of the Gods (1976).

Harald Reinl was an Austrian born director who was active in German cinema between the 1950s and 1986 (when he was stabbed to death by his wife). He was noted for a number of Edgar Wallace adaptations that frequently ventured into horror material during the 1960s, including Hand of the Gallows (1960), The Forger of London (1961), The Strangler of Blackmoor Castle (1963), Room 13 (1964) and The Sinister Monk (1965), as well as two Dr Mabuse sequels The Return of Dr Mabuse (1961) and The Invisible Dr Mabuse (1962), and other efforts such as The Carpet of Horror (1962), Siegfried (1966) and the Edgar Allan Poe adaptation The Torture Chamber of Dr Sadism (1967). Despite listing himself on the credits of Chariots of the Gods as ‘Dr. Harald Reinl’, Reinl has no doctorate degree.