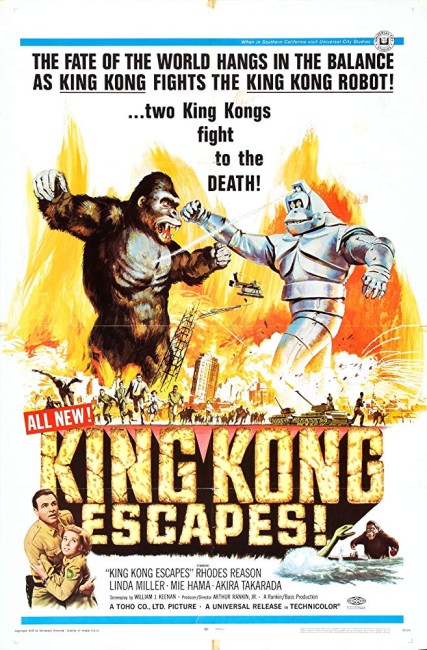 The submarine Explorer, commanded by Carl Nelson, comes upon Mondo Island where they find King Kong alive. Kong takes a liking to the ship’s nurse Susan Watson. As soon as news of Kong’s existence hits the world, Kong is abducted by Dr Who, a scientist in the employ of a foreign country, who is attempting to perfect his own robot version of Kong in order to dig for Element X and create weapons.

King Kong (1933) is the greatest of all monster movies. Many films have followed using Kong’s name – from Ernest B. Schoedsak and Willis O’Brien’s official sequel The Son of Kong (1933) to these Japanese-made sequels from Toho Studios, to Dino De Laurentiis’s infamous remake King Kong (1976) and its laughable sequel King Kong Lives (1986). However, these were all pallid imitators that failed to grant Kong any of his original majesty, at least up until Peter Jackson’s fabulous remake King Kong (2005).

At the same time, there is a frequent innocence to Toho’s films that makes it all rather inoffensive. The scenes with Kong engaged in a wrestling match with a dinosaur and the city-destroying mass destruction climax against the robot Kong has a colourful child-like appeal. Especially amusing is the heroine’s relationship with the ape – rather than, as it was in King Kong, a fragile romance that verges on a fairytale, here it is more like a girl with a 40-foot puppy dog. “Go after the ship,” she orders him at one point. Seemingly unaware of the coincidence of the name of the long running British tv series Doctor Who (1963-89, 2005– ), the film has a super-villain named Dr Who.

Like many Japanese monster movies of the 1960s, King Kong Escapes has scenes filmed with American actors for English-language release. What is odious about the version that comes from Arthur Rankin is that Arthur Rankin Jr has not only overseen such scenes but also added credits to give the appearance that he directed the film and that the Japanese only contributed additional scenes. In actuality, the entire film was directed by Ishiro Honda and all that Arthur Rankin Jr did was oversee the dubbing of the English-language version and at no point stepped behind the camera.