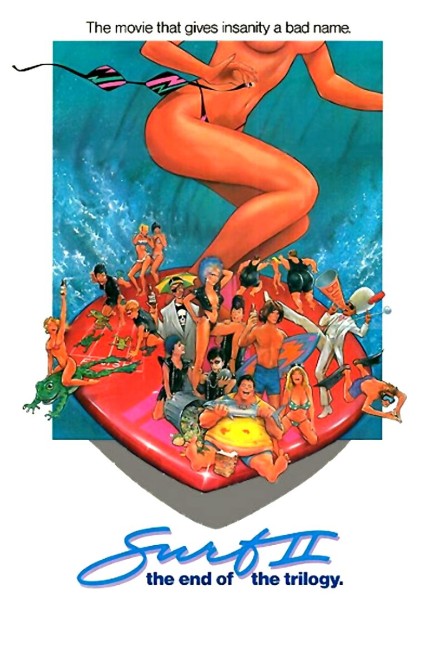 aka Surf II: The End of the Trilogy

Menlo Schwatzer has a hatred of all surfers. From his underwater base just offshore, he has created Buzzz Cola out of industrial effluent. He abducts various surfers and feeds them the Buzzz Cola, turning them into zombies. The police are baffled by the deaths. Menlo intends to exact his plot of revenge by selling Buzzz Cola along the beachfront. As Bob and Chuck and their various girls go about surfing, hating Buzzz Cola because it tastes awful, they become wound into stopping Menlo’s scheme.

The 1980s were a strange period of filmmaking that millennials only look back and at shake their heads in disbelief. The comedy landscape was dominated by the runaway hits of films like National Lampoon’s Animal House (1978), Porky’s (1982), Police Academy (1984) and Revenge of the Nerds (1984), which were followed by numerous sequels and a host of wannabes. The frat rat humour with its celebration of the wild party lifestyle, drunkenness, questionable sexual antics and lots of female nudity was fairly much de rigeur for the genre. A lot of the comedies from the period have not dated well.

Surf II, sometimes listed as Surf II: The End of the Trilogy, is one of the wannabes among these frat rat comedies. Almost everywhere I have heard mention of it, it is regarded as a bad movie. One of the things people seem unable to get their heads around is the fact that it is named Surf II when there never was a Surf I. It seems fairly evident to me that the filmmakers were spoofing the era’s penchant for sequelitiis, although it seemed that the joke went over the heads of some people – even when it was made more obvious by the sub-clause The End of the Trilogy being added to the title as well.

I don’t think Surf II is a bad movie candidate; equally, I don’t think it is a particularly good film either. It is a silly and wilfully stupid film but oddly inoffensive. It has a strange sense of humour that leaves you scratching your head. There are lame puns like the police chief being name Chief Boyardie – Chef Boyardee is a brand of canned pasta in the US – and his assistant Inspector Underpants. Boyardie later gives Underpants orders like: “I want the beach dusted for fingerprints.”

In one scene, it looks like director Randall Badat is shooting split screen where we have two families sitting at the kitchen table mirroring each other on either side of the screen and repeating the same dialogue, only for a later scene to have the camera move and reveal that the two families are sitting down to breakfast in the same house where apparently either side of the kitchen is dressed differently.

There is an extended scene where the John Belushi equivalent Joshua Cadman and a zombified punk engage in a garbage eating contest, which involves them eating trash and a dead fish, while a bystander holds a sub and then eats it after a seagull poops on it. In another scene, Joshua Cadman and friend demolish a car and tear off its roof, only for his mother to call out “Which car are you taking?” whereupon he answers “The convertible.”

There is a reasonable amount of genre content – Eddie Deezen is a mad scientist of sorts who has invented a soft drink made out of industrial effluent and is abducting surfers to his submarine base just off the beach and turning them into zombies, all as part of a plan to take revenge because of his hatred of surfers. Neither the mad scientist nor the zombie elements are taken seriously or ever amount to much. Deezen also has a device – a box placed around someone’s head that seems to beautify them. Linda Kerridge was turned from plain to hot with this and in the closing scene the two disgraced fathers who have been conspiring with Deezen to market the drink have boxes attached to the head to emerge in drag whereupon the film fades out with them being chased down the beach by two horndog surfers.

The most eye-opening thing about the film is some of the names attached. Terry Kiser, most famous as the corpse in Weekend at Bernie’s (1989), turns up as the father of a missing teen; Linda Kerridge was an Australian actress who was launched as a star as the Marilyn Monroe lookalike in Fade to Black (1980); police Chief Boyardie is played by Lyle Waggoner who was Steve Trevor on the Linda Carter Wonder Woman/The New Original Wonder Woman (1975-9) tv series; the mayor is played by Cleavon Little of Blazing Saddles (1974) fame. The most eye-opening name is that of Eric Stoltz, playing one of the surfers, is one of his earliest film roles.

Surf II was the one and only film of Randall Badat as director. Elsewhere, Badat was written a handful of screenplays, including War Games: The Dead Code (2006) and the tv mini-series Riverworld (2010).