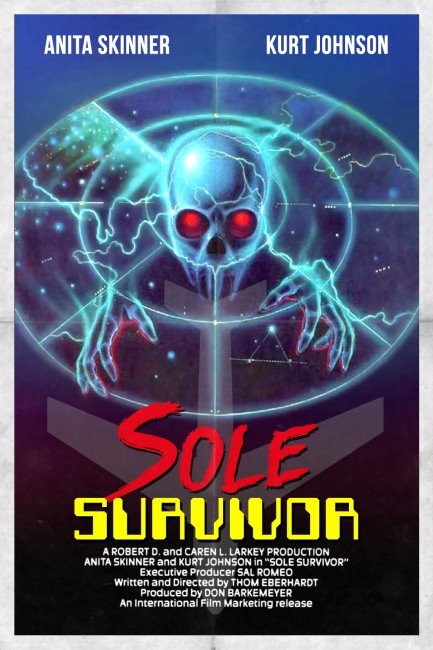 Karla Davis, a washed-up actress from the 1960s, calls her agent, urgently trying to get in contact with Denise Watson, who was working on a commercial that she is doing. Karla has had a premonition that Denise is going to be the sole survivor of a plane crash. The plane does crash and Denise is the sole survivor just as Karla envisioned. Soon afterwards, Denise begins to see mysterious figures standing about watching her. Next, the people around Denise start to be killed by these mysterious figures.

For a time, Sole Survivor starts out trying to do something more than be the usual zombie/slasher effort that was all the thing in horror cinema at the time it came out. But within a fairly short space of time, Sole Survivor reveals itself as another variant on what this author has named the deathdream fantasy or hallucination. The deathdream twist ending first appeared in the Ambrose Bierce’s short story An Incident at Owl Creek Bridge (1891). The Bierce story was filmed as An Occurence at Owl Creek Bridge (1962), the first time that such an ending has appeared on film. In the story, a man is hung but the noose breaks, allowing him to escape whereupon he runs home to his wife, only for his neck to snap just as he arrives and everything is revealed as an hallucination that occurs in the last seconds before his death.

Indeed, Sole Survivor reads as a more successful version of one of the films that took itself from the Ambrose Bierce story – the adaptation of James Herbert’s The Survivor (1981). The Survivor similarly dealt with the survivor(s) of a plane crash haunted by mysterious happenings who was revealed to have been dead all along in the twist ending. The ending was later also borrowed with the mainstream released Passengers (2008) and 7500 (2014). Of course, the story of someone having a premonition of a plane crash and the survivors thereafter being subject to mysterious deaths was later used substantially in Final Destination (2000).

Director Thom Eberhardt gets some undeniable atmosphere out of the images of people blankly standing about on the periphery of camera vision or pursuing the heroine. Unfortunately, Sole Survivor never quite gels. A major part of the problem is that it is never too clear what is happening. It gradually becomes apparent that it is meant to be some type of deathdream story – but whether Anita Skinner is being pursued for having survived the flight when she wasn’t meant to a la Final Destination or has been dead all along is something that the film never clarifies. To those less informed by the genre, we have a story about the dead pursuing a plane crash survivor for no clearly discernible reasons. Whatever tenuous reasons might be assumed about what is going on are surely broken by the twist ending, which has the dead also get up after the morgue attendant who wasn’t in the plane crash.

Lead actress Anita Skinner is too bland for the part. Moreover, the film lacks the budget to even depict the plane crash.

Sole Survivor should not be confused with several other films with the same title, including the tv movie Sole Survivor (1970), which was also about a precognition of an air crash, and the Dean R. Koontz mini-series Sole Survivor (2000), which also involved plane crashes, as well as Soul Survivors (2001) about a girl being haunted after surviving a car crash (which also borrowed the deathdream ending) and the ghost story Soul Survivors/Spectres (2004).