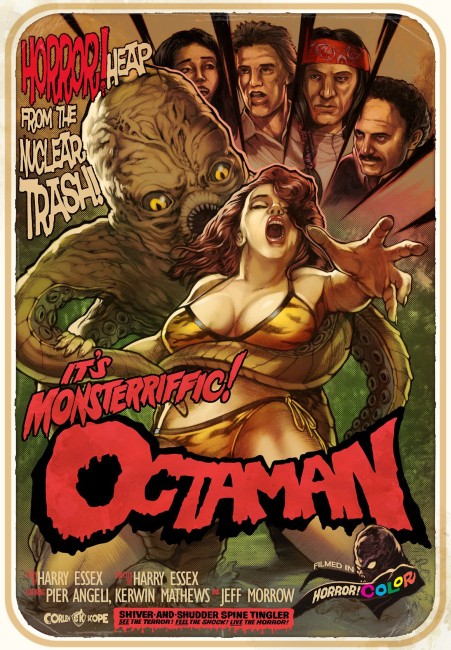 Marine biologist Rick Torres is conducting research on the seafood diets of villagers in a remote part of Mexico. While doing so, he and his assistants discover a new type of octopus and Torres believes that it is an important prehistoric link. The villagers then report seeing a humanoid octopus creature. Torres is unable to convince his superiors to fund an expedition and so instead obtains backing from the carnival showman Johnny Caruso who wants to capture and display the octaman. However, as they set out to capture the octaman, it develops a fixation on Rick’s fiancee Susanna.

Rather than some kind of cephalopod, Octaman should really be considered a dinosaur. In the 1970s when it was made, the type of film that Octaman was trying to be – a 1950s atomic monster movie – had died off. The monster movie genre was starting to concern itself with nature turning against humanity in films like The Birds (1963), Willard (1971), Frogs (1972) and a great many imitators of these and then a few years later killer leviathans following the mega-success of Jaws (1975). Amidst these, Octaman was a throwback. Certainly, to the film’s credit, while invoking atomic mutations, it does also throw this in alongside discussions on pollution and recycling.

In trying to copy the 1950s monster movie, the producers went and actually obtained the services of one of the writers of two classic 1950s sf/horror movies – Harry Essex. Essex wrote a number of Westerns and film noir thrillers during the 1940s and 50s, as well as an earlier mad scientist film Man Made Monster (1941) and had made his debut as a director with the Mickey Spillane adaptation I the Jury (1953). However, Essex is most famously known as the co-writer of It Came from Outer Space (1953) and The Creature from the Black Lagoon (1954), both of which are respectively formative classics of the 1950s alien invader and monster movie. Although, despite an eminent background in the 1950s, one suspects that the success of these films is due to reasons other than Essex – It Came from Outer Space was famously rewritten from a detailed treatment by Ray Bradbury, while The Creature from the Black Lagoon is a fairly standard monster movie on a script level but gains all its effect from Jack Arnold’s atmospheric direction.

Certainly, in his two genre outings as a director, with Octaman and the alien invader film The Cremators (1972), Harry Essex produced two films that have only been remembered by those who laugh at bad films. Indeed, in Octaman, all that Essex seems to have done is recycle his plot from The Creature from the Black Lagoon – scientists go hunting a creature in the South American jungles and rivers where it turns around and starts to hunt them, even develop a lust for the token woman of the expedition. When it comes down to it, the creature is interested in nothing other than abducting the heroine – which it does not once, but twice. Essex has also thrown in other cliche characters like the huckster carnival showman who has been appropriated from Robert Armstrong’s Carl Denham in King Kong (1933).

Octaman was the first screen credit of Rick Baker, later to become one of the top makeup effects artists in Hollywood with the creation of the title beings in King Kong (1976), An American Werewolf in London (1981), Greystoke: The Legend of Tarzan, Lord of the Apes (1984), Harry and the Hendersons (1987) and The Nutty Professor (1996) to name but the most famous of his works. His Octaman creation has an undeniable cheesy effectiveness and is certainly one of the best things about the film. Sadly, the film surrounding Rick Baker’s creation is tedious. The octaman never does a whole lot for most of the film excepting stand around in rivers swinging its tentacles. Even when it starts killing people, still nothing much happens.

And then there are parts of the film that are just downright laughable. Like the scene where the heroes manage to surround the creature out in the open air with a circle of flames about 30 feet in diameter and then Kerwin Matthews proclaims: “Keep away from him, Steve. The fire’ll burn up all the oxygen around him” (as though an open-air fire exists in a vacuum and is not capable of pulling in oxygen from anywhere else around).

The most tedious part of the film is where the characters become trapped in a series of caverns while pursing the octaman. These scenes become bogged down in tired cliches about the party running out of air and having to traverse a narrow defile in order to escape, which fail simply because Essex does nothing to make it in any way look like the party happen to be in a series of caves. And then there is the biologically absurd notion of an octopus haunting fresh water rivers rather than salt-water oceans where they are usually found.

Harry Essex goes to shoot in Mexico and casts locals as his extras – even so though, the film still manages to cast Latin Americans as the equivalent of movie American Indians, who all speak in pidgin English without using any articles. If Octaman were not so dull, it would be laughably terrible.