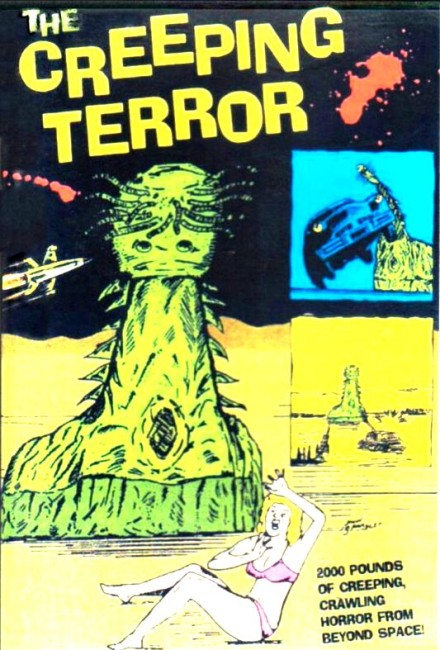 Sheriff’s deputy Martin Gordon and his new bride Brett are returning home to Angel County, California, from their honeymoon when they see a rocket descending. A creature emerges and rampages across the countryside, devouring people.

The Creeping Terror is one of those real Z movie classics. It is right up there with Cat Women of the Moon (1953), Robot Monster (1953), Attack of the 50 Foot Woman (1958), Plan 9 from Outer Space (1959), The Horror of Party Beach (1964) and other such classics of ineptitude from the same period, even if it has never attained the same notoriety that these others have.

Like most of these films, The Creeping Terror exerts a terribleness that is fascinating to watch. The gap between what it sets out to achieve and what it actually does achieve is a gaping chasm. An alien ship coming down is laughably represented by stock footage of the launch of a Saturn rocket being played in reverse. Two thirds or more of the plot is told in narration – the reason for this being that the film’s soundtrack was lost and so director Art J. Nelson dubbed the entire thing himself. Every time we cut back to the crashed alien ship, we are treated to the same repeated shots of two soldiers pacing back and forward in front of it and of the same wobbling alien creature inside.

Most hilarious of all is the carpet monster. It looks exactly like a carpet draped over several people. It creeps so slowly that the only way for it to catch victims is for them to stay still or fall over, which they constantly do with naturally amusing results. One shot of a bikinied girl being swallowed up and her screams continuing to emit has an audience in laughter. Although the funniest scene is where the creature attacks a dancehall and pursues a group of people who all flee the hall in a panic that takes place at a walking pace.

The cast are all terrible – Art J. Nelson is simply unnable to direct actors. He has no sense of pacing – some scenes like the ones of people dancing at the dancehall seem to go on forever. Nor can he write – the plot consists almost entirely of scenes of the monster rampaging, which alternately cut back and forward between the alien ship and the same two static camera set-ups of people discussing things at the police station (something that is represented only by a desk and wall). There is a rather funny scene where Nelson (who plays the hero under the name Vic Savage) invites co-worker Norman Boone to dinner and then starts making out with Shannon O’Neil, whereupon the narrator starts lecturing about marriage and how some people feel left out.

There is at least the germ of a good idea at the back of The Creeping Terror – the concept of an alien creature devouring people to analyze them is the sort of idea that one could imagine as an episode of tv’s The Outer Limits (1963-5).

The Creeping Terror would be the only film that Art J. Nelson would ever direct, although he had earlier written, produced and starred in Street Fighter (1959). Before the film’s completion, he disappeared and was never heard from again. The film itself was put together and released by its financier William Thourlby in an attempt to recoup some of his costs. Wild stories circulated about what had happened to Nelson, including rumours of a mob hit, but more mundanely it would appear that he fled town to avoid debtors. He slunk about doing odd jobs before dying of alcohol-induced liver failure at the age of 41 in 1975.

The Creep Behind the Camera (2014) was a fascinating documentary about the making of the film and the story of Art J. Nelson