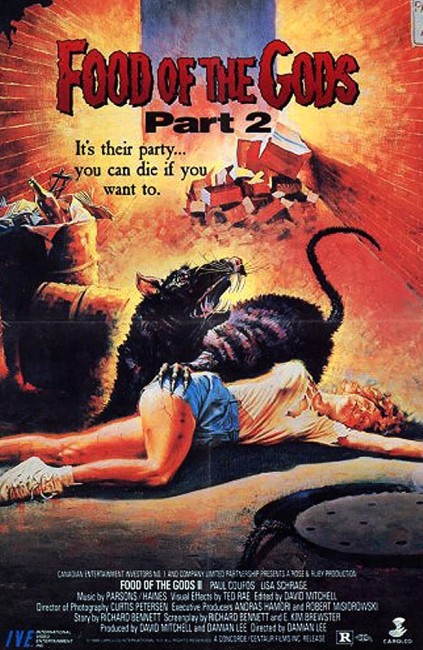 aka Food of the Gods 2

Biologist Neil Hamilton succeeds in synthesising a growth hormone and uses it to create giant tomatoes. However, the tomatoes are eaten by caged rats, which then grow until they become the size of dogs. When animal rights activists break into the lab, they accidentally succeed in freeing the rats. The rats escape down into the tunnels beneath the campus and start preying on people.

If the low-budget horror films of the 1980s are to be looked back on at any future date and noted for anything (other than their quantum leap forward in the art of splatter effects), it would undoubtedly be for their rampant sequelisation. It is not just the eleven Friday the 13th films or the eight Nightmare on Elm Street films and ten Halloween films but sequels to films that nobody even liked or saw in the first place – such as King Kong Lives (1986) and Alligator II: The Mutation (1991), even entire series of sequels to films that sucked such as the Witchcraft, Children of the Corn and Leprechaun series.

With Gnaw: Food of the Gods II all that one is struck by is one colossal ‘why?’ Everyone bar nobody hated Bert I. Gordon’s The Food of the Gods (1976) – it did little business, is difficult to find on video and the only distinction it attained was various footnotes in The Golden Turkey Awards (1980). When it comes to this sequel, one is struck by an overwhelming sense of pointlessness as to why it was ever made.

The Food of the Gods was a film it would have taken almost no effort for a sequel to be superior to. However, Gnaw: Food of the Gods II does the astounding job of managing to be an even worse film. Everything about it is stunningly bad – bad on the level that sends shivers of excitement up and down the trash culture fans that idolise Edward D. Wood Jr and Herschell Gordon Lewis. The acting is incredibly bad – especially Colin Fox as Paul Coufos’s professor and an exterminator that has been modelled after Clint Eastwood.

People do things for stupid reasons – for example, after seeing their comrade torn apart by a giant rat, two animal rights protesters decide to go down into the sewers (unarmed) to try and prove the existence of the rat. Victims are pointed to from the outset – the two animal rights protesters who decide to go down into the tunnel, the Hispanic guy who goes to urinate in the bushes (not once but twice!), the janitor driving though the tunnels making jokes about the reports of giant rats, Paul Coufos’s department head who is trying to steal the research, the greedy self-interested dean who is yet another copy of Murray Hamilton’s Mayor in Jaws (1975), and of course the sports centre opening with its synchronised swimmers.

Gnaw: Food of the Gods II has its good share of riotously unintentionally funny sequences – like one sequence with Paul Coufos dreaming he has injected himself with the formula and turns into a giant as he has sex with Kimberly Dickson – the images of the giant-size Coufos pumping between her thighs and pawing her with a giant hand are utterly hysterical. The climax involves Paul Coufos having Three Blind Mice played to draw the rats along Pied Piper-like.

There is a high gore quotient – one part that is at least convincing – with various ripped-out throats, severed limbs and gouged backs. On the other hand, there is a completely superfluous (if somewhat entertaining) meltdown sequence – the effect of which is ruined by the hysterical sight of someone injecting goo onto the victim’s face from behind his lab coat.

Star Paul Coufos is a dead ringer for Scott Bakula even down to an identical acting style. Lead actress Lisa Schrage has so little to do in the film she could have been written out without anybody noticing. The film was made in Canada and, although it claims to be set in New York, one can see French-English bilingual signs in the background indicating it was probably shot in Quebec.

Director Damian Lee went on to direct the equally terrible Abraxas: Guardian of the Universe (1991) and then went onto the serial killer thriller Papertrail (1997), the action film Agent Red (2000), the thriller King of Sorrow (2006) and the serious dramatic film The Poet (2007). Lee however did make the compulsively fascinating, indescribable InnerAction (1996). He has also produced a body of low-budget sf, horror and action films, including Spacerage: Breakout on Prison Planet (1985), Roger Corman’s Dean R. Koontz adaptation Watchers (1988) (which he also wrote), the quite good study in female juvenile delinquency Fun (1994), the action film The Killing Machine/The Killing Man (1994), Jungle Boy (1996), Specimen (1996), Spill/Acid Death/Virus (1996), and the psycho-sexual thrillers Jill the Ripper/Jill Rips/Tied (1999) and Mercy (2000).