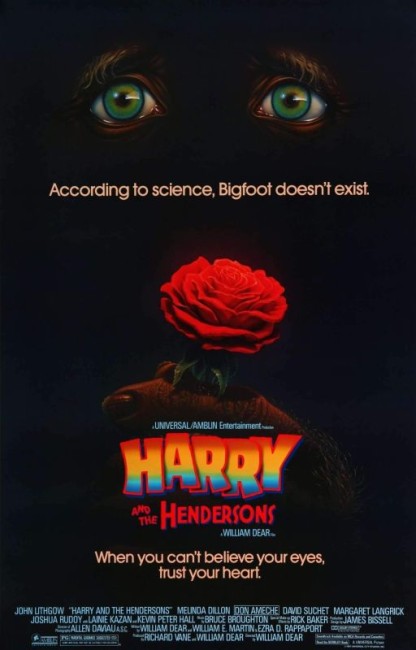 aka Bigfoot and the Hendersons

On their way back from a hunting trip, the Henderson family accidentally run down a large ape-like creature. Realizing that it is the legendary Bigfoot, they take it home. However, once there it comes back to life. They befriend the Bigfoot, whom they name Harry, and are eventually struck by its incredible genteel and kindness. When Harry threatens to wreck their house with his ungainliness, they are forced to make him go. Harry then becomes the focus of an hysterical citywide manhunt and is sought by an obsessed tracker and the Hendersons are put in the position of having to protect him.

The backwoods legend of Bigfoot or Sasquatch gained its popularity in the 1970s. There Bigfoot appeared in a number of bottom of the barrel horror films and sensationalistic pseudo-documentaries, including Bigfoot (1971), The Curse of Bigfoot (1972), The Legend of Boggy Creek (1972), Shriek of the Mutilated (1974), The Legend of Bigfoot (1975), Manbeast! Myth or Monster? (1975), The Mysterious Monsters (1975), Creature from Black Lake (1976), In Search of Bigfoot (1976), Sasquatch (1976), The Capture of Bigfoot (1977), Snowbeast (1977) and Night of the Demon (1980), even revealed as an alien robot in an episode of tv’s The Six Million Dollar Man (1973-8). With Harry and the Hendersons, Bigfoot received the heart-of-gold treatment from Steven Spielberg’s Amblin production company in a film that probably had a bigger budget than all the abovementioned put together. This family-friendly and environmentally conscious approach to Bigfoot would be followed by a number of other films throughout the 1990s and 00s.

Harry and the Hendersons was one of a number of such family films that Steven Spielberg and his Amblin studios produced during the 1980s. Direction was turned over to William Dear, who had previously emerged with the mildly amusing time travel film Time Rider: The Adventure of Lyle Swann (1983) and then the Mummy Dearest episode of Spielberg’s tv series Amazing Stories (1985-7). In fact, Harry and the Hendersons is the best film of William Dear’s otherwise undistinguished output. (See below for William Dear’s other films).

Thanks to Rick Baker’s superbly expressive animatronic suit in tandem with Kevin Peter Hall’s extraordinary mime work, Harry is a heart-warming creation. It is hard not to be touched by the images of the creature pining as it tries to find the rest of the body a mounted deer’s head should be attached to, learning how to pat a dog or the image of young Joshua Rudoy and his teddy-bear curled up in a corner in its arms. Certainly, without Rick Baker and Kevin Peter Hall, Harry and the Hendersons would be a bland film. There is a marshmallowy heart to the exercise. This is something that William Dear tries frantically but not entirely successfully to paint over this with an active and witty script. However, it is the humanity that the creature is invested with that eventually makes the film. The oddest thing to emerge out of such a family film is its inclusion of a strong, sometimes poignant anti-hunting, anti-fur, pro-vegetarian message.

The film was subsequently transformed into an unfunny sitcom Harry and the Hendersons (1991-3), which surprisingly lasted two seasons. The only returnee from the film was Kevin Peter Hall.

William Dear went onto direct the James Bond spoof If Looks Could Kill/Teen Agent (1991), the unsold tv pilot Journey to the Center of the Earth (1993), the remake of Angels in the Outfield (1994), the horror film Simon Says (2006), the tv movie Santa Who (2006) and the baseball fantasy The Sandlot: Heading Home (2007). Dear’s work since the mid-90s has almost exclusively been in television.