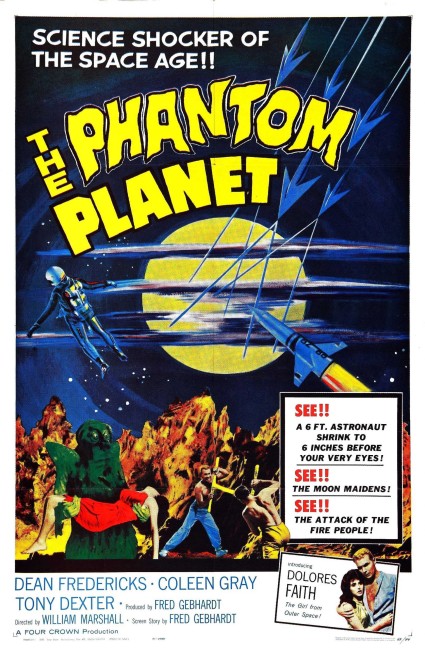 The Pegasus IV is launched from a US base on the Moon with an assignment to determine what has happened to two previous space missions that have gone missing. The Pegasus is damaged by a meteorite shower and crashes on the surface of an asteroid. The only survivor is the mission’s commander Frank Chapman. Frank is approached by the miniature-size inhabitants of the asteroid, known as Rheton. The planetoid’s dense magnetic forces shrink Frank down to the inhabitants’ size. He is placed on trial and sentenced to remain on Rheton for the rest of his life in order to protect the secret of the inhabitants’ existence. There Frank is caught between the attentions of two women and must fight a duel against a jealous male. At the same time, Rheton also comes under attack by the invading Solarites.

The Phantom Planet is a cheap science-fiction film from the early days of the Space Age. It was not seen much when it came out and its profile has rarely improved any since then, with its only distinction being its regurgitation on Mystery Science Theater 3000 (1988-99, 2017-8).

The film is dreary and slow moving. Its’ one moment of joyously surreal beauty is a scene early on where astronaut Dean Fredericks crashes on the asteroid, collapses in his spacesuit and is then approached by the miniature inhabitants of the world who come up and tap on the glass plate of his helmet, wondering where the inhabitant is. It could almost be a Space Age version of the famous beach scene from Gulliver’s Travels (1726). Alas, such a wonderfully bizarre image in promptly undone by the banality of the very next scene, which has Dean Fredericks placed on trial where the film then engages in an utterly dull debate about jury selection.

The rest of The Phantom Planet certainly never rises to anything as imaginative as this – the whole film takes places in a series of rock caves with most of the drama centred around the hero being caught in a quartet of romantic jealousies. There is an alien invasion and space war later on but the cheapness of the special effects prevent any adequate depiction of this.

There is also a monster (played by Richard Kiel, alias the steel-toothed Jaws of James Bond movie fame) that breaks loose but fails to get up to much. This is alas symptomatic of the rest of The Phantom Planet, which remains a frustratingly slight film that fails to go anywhere.