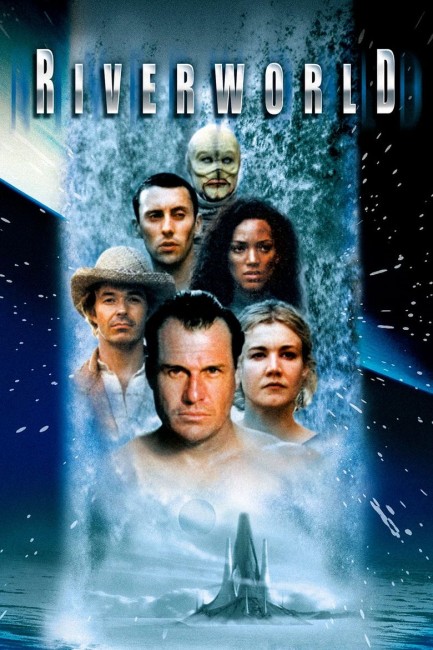 In 2009, space shuttle commander Jeff Hale is killed when his shuttle is hit by meteorites. He wakes up floating underwater in a sea of green globes, each of which contains a person. He swims to the surface, finding himself on the banks of a river, naked except for a metal canister containing a set of clothes. Numerous other people emerge out of the water. They discover that they each come from different time periods and countries. They can all remember their own deaths but have reborn in younger bodies. Something allows them to all speak the same language. As they set out to try to discover where they are, they are captured by Vandals. Among the group of prisoners is the Roman emperor Nero who overthrows the Vandal leader in combat and proclaims himself the ruler. Aided by a mysterious hooded figure, Hale and the others make an escape. They are welcomed into a neighbouring community run by Samuel Clemens, better known as writer Mark Twain. Sam is building a riverboat with which he plans to set forth and explore the rest of Riverworld. However, Nero’s spies gain wind of the riverboat and make a determined effort to capture it.

Philip Jose Farmer (1918-2009) was one of the great science-fiction authors. Unlike the hard science extrapolation that most other genre authors concern themselves with, Farmer’s focus was soft science-fiction (psychology, the humanities, modern mythology). Farmer garnered controversy in the 1960s with works like Flesh (1960) and The Lovers (1961), which pushed the envelope of sexuality more than any other science-fiction author had done to that date. Other works like Jesus on Mars (1979) and the short story version of Riverworld (1966), which dealt with a less-than-divine Jesus Christ’s incarnation on the Riverworld, courted controversy with their debunking and demythologising of religion.

Many of Philip Jose Farmer’s works playfully deconstruct, crossover or continue the adventures of other fictional characters. These include works like Lord Tyger (1970) about the anthropologically realistic attempts to create a Tarzan; The Wind Whales of Ishmael (1971) where Herman Melville’s Ishmael ends up on an alien planet; The Other Log of Phileas Fogg (1973), which sets an alien invasion in and around the inconsistencies of Jules Verne’s Around the World in 80 Days (1872); Hadon of Ancient Opar (1974) and Flight to Opar (1976), two adventures set in Edgar Rice Burroughs’ fictional city; The Adventures of the Peerless Peer (1975), which pairs Sherlock Holmes and Tarzan; A Barnstormer in Oz (1982), which deconstructs L. Frank Baum’s Oz books; an entire series – the hilarious A Feast Unknown (1970) and its sequels Lord of the Trees (1970) and The Mad Goblin (1970), which offer up thinly disguised adventures of Tarzan and Doc Savage; two cod-biographies – Tarzan Alive (1972) and Doc Savage: His Apocalyptic Life (1973) – with which Farmer created the Wold Newton universe wherein he speculated that an extraordinary range of fictional characters were related, interbred and sometimes even the same person operating under an alias; as well as an authorised original work in either universe with the Doc Savage novel Escape from Loki (1991) and the Tarzan novel The Dark Heart of Time (1999).

By far and away, Philip Jose Farmer’s most famous works have been the Riverworld series, which consists of the novels To Your Scattered Bodies Go (1971), The Fabulous Riverboat (1971), The Dark Design (1977), The Magic Labyrinth (1980) and The Gods of Riverworld (1983). Farmer later sharecropped the universe to allow other writers to use it in two short story collections Tales of Riverworld (1992) and Quest to Riverworld (1993), as well as authorising the creation of Riverworld role-playing and computer games.

The basic premise of Riverworld is ingenious – for reasons unknown, every human ever born has been resurrected on a planet by aliens. The books have a vast canvas of historical characters – the hero is Richard Burton (the 19th Century British explorer, not the actor) and the heroine Alice Hargreaves, the model for Lewis Carroll’s Alice in Wonderland (1865), while elsewhere we get appearances from Mark Twain/Samuel Clemens, King John, Herman Goering, Cyrano de Bergerac, The Red Baron, Jack London, Odysseus, Western actor Tom Mix, and the conspiracy of characters that Farmer believed to be Jack the Ripper, among many others. Farmer created a huge saga, although clearly one where he had no idea about how he was going to resolve matters – The Gods of Riverworld proved an underwhelming resolution, while surely the lack of pre-planning can be seen in the fact that Farmer confusingly had two versions of himself (named Peter Jarius Frigate) running around through the books.

The film rights to Riverworld had been obtained as long ago as the 1980s, before finally emerging as this movie for The Sci-Fi Channel. (In fact, this is the first Philip Jose Farmer work to be adapted to the screen, although the Dayworld books were apparently being planned as an action movie in the mid 1990s. Farmer’s World of Tiers adventure series would also make for a great film adaptation some day). It is not known whether Riverworld was intended as the pilot for a tv series (which it gives the appearance of doing) or designed solely as a one-off – certainly, it never went to series.

The film severely condenses the plots of To Your Scattered Bodies Go and The Fabulous Riverboat. The huge cast of historical characters has been massively curtailed. The most notable disappointment is how the character of the British explorer Richard Burton – see Mountains of the Moon (1990) for a screen depiction – has been replaced by a generic and non-historically based American hero in Brad Johnson’s space shuttle commander. In fact, the only characters common to the film and the books are Samuel Clemens, Alice Hargreaves and the alien Monat.

In the books, the chief villain seeking to steal the riverboat was King John (the same British king who signed the Magna Carta and appears as usurper of his brother’s throne in most versions of the Robin Hood legend). For reasons unknown, he has been replaced by the Roman Emperor Nero (a character who does not appear in the books) – presumably on the thinking that the American audiences would not know who King John was. (Even then the Roman Nero has been incongruously played as a villain with an upper-class British accent).

The odd part about the characters that the film does retain – Samuel Clemens and Alice Hargreaves – is that the script seems almost embarrassed about naming them. All we are given is clues – Alice draws a picture of the Mad Hatter, Clemens reads some of The Adventures of Tom Sawyer (1876) to Nikita Kearsley as a bedtime story and has his identity exposed by Brad Johnson near the end. In fact, I don’t think Alice was even mentioned by name throughout the story. (It is possible though that the film was leaving these as revelations for further episodes of a tv series that never emerged).

Major concepts of the books have also been excised. One of the big problems with such a canvas of historical characters would be that everybody would speak different languages – Farmer saw the solution in Esperanto becoming a universal tongue. By contrast, the film comes up with a magical sweep of the hand that allows languages to be automatically translated.

There are also children on this Riverworld, whereas in the books no young people are resurrected and everybody is incarnated in their bodies at the age of 24 and remain unaging thereafter. In the books, everybody is resurrected simultaneously but here they apparently do at staggered intervals – Brad Johnson and others emerge to find an established Vandal society and the Riverboat nearly completed, for instance. Brad Johnson’s hero is also granted an unexplained ability to see the future.

Another major issue of the books revealed in The Fabulous Riverboat is that the Riverworld has no iron, thus preventing the development of industry. A traitor among The Ethicals, the aliens who created the world, diverted an iron-rich meteorite to crash on the world, allowing some people to build weaponry and the riverboat. By contrast, within the first few minutes, the film has a horde of Vandals riding in on horseback to capture everybody (there are no animals on Riverworld in the books either), somehow having developed armour, leather costumes and swords. (To the film’ credit, the meteorite is mentioned in one line towards the end).

The sad truth about Riverworld the film is that Stuart Hazeldine, the writer chosen, has no feel for what Philip Jose Farmer was attempting to do in the books. The books were an essential ‘What If?’ game about imagining the meeting-up between and adventures of characters from various periods of history. All that Stuart Hazeldine gives us is a story about a group of people waking up on a strange world and wondering why they are there. Most of the historical personages have been thrown out in favour of figures of no significance. There is no sense in the film of the characters being real historic people – but that surely is the very appeal of the Riverworld concept. In failing to so fundamentally understand the basic premise, Hazeldine and the producers completely mangle Riverworld. Around the time, Stuart Hazeldine had signed on to write a film adaptation of John Christopher’s fine The Tripods trilogy and often rumoured version of Paradise Lost both for Alex Proyas (although neither emerged), and went onto make his directing debut with the worthwhile Exam (2009) about a group of candidates locked in a room and asked to complete a mysterious exam and the subsequent faith-based The Shack (2017).

The story is at least held together by the handsomely heroic certainty that Brad Johnson projects and a deliciously evil Jonathan Cake who seems to be in his element and having a field day as Nero. Elsewhere though, the casting is a disaster. The most notable of these is Australian actor Cameron Daddo as Samuel Clemens. Daddo plays the part with a broad and very fake standard American accent – but surely the crucial thing to anyone who has done even a small amount of biographical reading on the real Clemens would be that he would have a strong Southern accent. Moreover, the film’s Clemens is blonde rather than dark-haired – clearly the makeup people were thinking of the Clemens that we usually see depicted as a white-haired middle-aged or older man. (Although even then, Cameron Daddo is outfitted with a very bad dye job, where his natural dark hair can clearly be seen underneath the blonde dye and the result looks like Samuel Clemens recast as a bleach blonde surfer). This is also a Samuel Clemens who is singularly lacking in any of his dry, trademark wit. The character that comes the closest to the way that Farmer wrote them is Alice Hargreaves who is at least incarnated as an English lady of manners.

Kari Skogland may well have received an award as one of the 10 Hollywood Directors to Watch but her work here belies such acclamation. Certainly, outside of Men With Guns (1997), none of Skogland’s work has stood out in any way and all of her work during the 2010s has been in episode television. The only other film of hers I have seen is the psycho swingers film Zebra Lounge (2001), a thriller that was laughable in its inability to conduct its premise with even basic credibility. Riverworld was shot on location in New Zealand and one of the pluses is some lush and lovely scenery. There are some magnificent shots circling the Riverboat as it sets off down the river.

Riverworld (2010) was further mini-series revival for tv, although conducted an equal abortion of the original Philip Jose Farmer books.