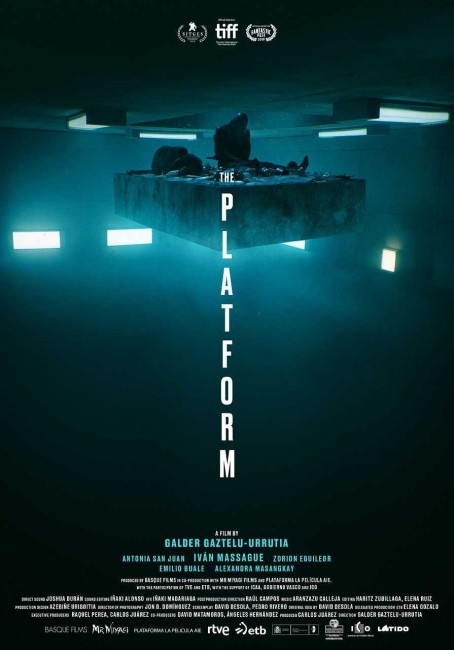 Goreng comes around in a prison cell along with his cellmate Trimagasi. Goreng has volunteered to be there for a six-month sentence for which he will earn a degree but Trimagasi has been sentenced to a longer period for a violent attack. Trimagasi only grudgingly answers Goreng’s questions about how the place operates. As Goreng discovers, the prison extends to over two hundred levels, possibly more, stacked on top of each other with each level containing a two-person cell. They are on the 48th floor. Every day a platform containing a banquet table of food passes down stopping for a few minutes on each level. Those at the very top had a fully laden table but as the table goes downwards it becomes emptier, leaving those at the bottom to scrabble for scraps or starve. Each month the cells are randomly rearranged on different floors. This has resulted in a hierarchy with those higher up looking down on and abusing those below them. Goreng refuses to descend to the barbarism he sees happening among other inmates, including those at lower levels eating the flesh of their cellmates. Goreng becomes drawn to Miharu, a crazed woman who travels up and down on the table searching for her child who may not even exist.

The Platform was a directorial debut for Spanish director Galder Gaztelu-Urrutia. The film premiered at the Sundance and toured a number of film festivals.

Perhaps the nearest film to point in terms of analogy for The Platform might be a film like Cube (1997), a conceptually ingenious thriller in which a group of people had to make their way through a maze of identical rooms while piecing together the puzzle of the labyrinth’s design in order to survive. (Cube also had a similar underlying theme to The Platform where in order to survive everybody needed to cooperate rather than look only to themselves). Ever since Cube we have seen a variety of variants with the likes of Shadow Puppets (2007), Exam (2009), The Human Race (2013), The Maze Runner (2014), Andron (2015) and In the Tall Grass (2019), all featuring people imprisoned in strange labyrinths/traps and engaged in an existential mystery in order to survive. You could maybe call the film Cube crossbred with the biting social allegory of High-Rise (2015).

Cube was filmed on a single set that was lit differently every time the group entered a new room. Similarly, The Platform takes place on a single set – a bare room with (initially) two men, newcomer Ivan Massague and phlegmatic Zorion Eguileor. As the film opens, the conversation between the two is terse and wittily dry but you keep reacting to the nonchalant acceptance of the bizarreness of the situation by Eguileor – putting a pillow down to kneel just as the table arrives and urging Massague to eat, his contempt of those beneath and spitting onto the table as it departs, all the while denying the rumours that he ate the flesh of his former cellmate.

We gradually start to gain an understanding of the bizarre pocket world that we have been placed in. (The film never concerns itself with the world outside and does nothing at all to explain the social scenario that could have led to the building of such a prison). The situation becomes all the more disturbing when crazy woman Alexandra Masangkay appears riding the table down in search of her child and we see her violently dragged away by the inmates below – before we are told that she does this every month after killing her cellmate and that the child she is searching for may not even exist. And then there is the jolt where Ivan Massague wakes up to find himself tied to his bed by Zorion Eguileor who is preparing to eat his flesh.

It gradually becomes apparent that The Platform is intended as a savage condemnation of privilege in society. The prison becomes a stunningly literal allegory of the gaps between haves and havenots – one where people are randomly striated out into the levels of a building and everybody is living on the leftovers of those at the top. Amid this, we see the senseless, pointless lording of superiority by those above over those below. At one point, Emilio Buale uses the one item he is allowed to bring with him – a rope – and gets the people above to haul him up only for them to turn and shit all over him as they pull him up and then take the rope.

The turning point of the film involves Ivan Massague and Emilio Buale conducting a revolution, riding the table all the way down to the depths and fending off the people on the first fifty floors with weapons to ensure the lower depths have an equitable distribution of food, before coming up with the idea of letting the table return to the top with a panna cota dessert left untouched as a gesture of defiance. The journey down into the depths becomes a grim and disturbing catalogue of human desperation as in passing we view vignettes of violence between inmates, see bodies torn apart and people feasting on them – only for Ivan Massague to reach the bottom and face the big choice of whether to abandon the gesture of defiance or feed someone.