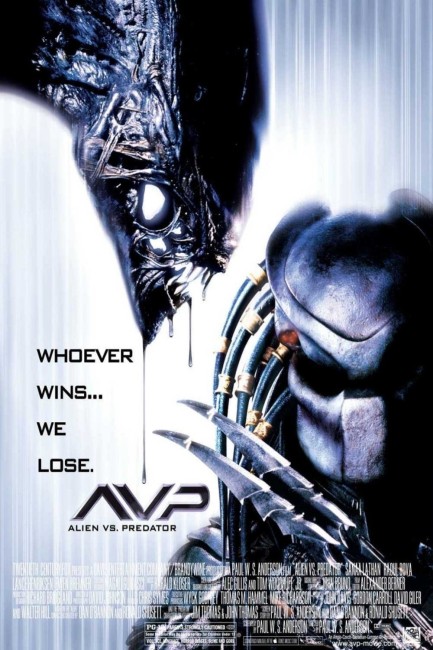 A group of scientists, archaeologists, engineers and even a mountaineer are brought together on an icebreaker heading towards a remote part of the Antarctic. Aboard they meet billionaire Charles Weyland who tells them how his satellites have detected a vast pyramid thousands of years old buried under the ice and that he wants to be the first to explore it. The team land at an old abandoned mining station where they are startled to find that a hole has already been drilled down through the ice to the pyramid. As they explore the inside of the pyramid, it comes to life, trapping them in its interior. They find that they are caught between two different species of alien – one that regards humanity as an incubator for its eggs, the other an intergalactic sportsman that hunts game. As the two aliens start picking off their numbers, it is discovered that the predators in fact helped raise humanity as a species, teaching them civilisation, in order to become incubators for the aliens, which they hunt for sport.

Alien (1979) was one of the great classics of science-fiction cinema and is possibly the most influential genre film of the last quarter century. It spawned three sequels – James Cameron’s Aliens (1986), which is as much a fan favourite as the original, as well as Alien3 (1992) and Alien: Resurrection (1997). Predator (1987), mounted as an action vehicle for Arnold Schwarzenegger, was one of the better attempts to copy Alien. This also spawned several direct sequels Predator 2 (1990), Predators (2010), The Predator (2018) and Prey (2022). AVP: Alien vs. Predator represents the bringing together of the two film franchises.

The idea of an Alien vs Predator began sometime in the late 1980s when someone noticed that the copyright for both series was held under the one roof at 20th Century Fox. The idea gained its first legitimate acknowledgement in Predator 2 where it is possible see one of the Alien heads mounted in the back of a predator ship as an in-joke. Around the same time, the idea appeared as Aliens vs. Predator (1990), a five-issue comic-book from Dark Horse Comics, who had licensed the graphic rights to both movie franchises and spun both out successfully as individual series. The Dark Horse-driven Aliens vs. Predator combine became a successful franchise in its own right, spawning numerous graphic mini-series, novelisations, trading cards, kitset models and team-ups with other movie characters including the Terminator. Beginning in 1992 there were a series of Alien vs. Predator home console and arcade videogames produced by different companies where one was able to play the various creatures or hunted humans.

The idea of the Alien(s) vs. Predator concept becoming an actual film also gained an extraordinary presence on the rumour mill. It was apparently proposed to Sigourney Weaver around the time of Alien3, who thought the idea terrible and rejected it outright. There have been a number of spec scripts floating around the internet for a number of years, the most famous of which was written by Hellboy (2004) screenwriter Peter Briggs.

Around 2003, there suddenly became much interest in the idea of monster/classic character team-ups – there was the adaptation of The League of Extraordinary Gentlemen (2003) featuring various characters from Victorian literature and then Van Helsing (2004), a big-budget revamping of a 1940s Universal monster bash. Most of all, there was the success of Freddy vs. Jason (2003) where New Line Cinema brought together the two franchises that they had under one roof – the Friday the 13th and the A Nightmare on Elm Street series – to duel it out. (Freddy vs. Jason had been a project of equal popularity on the rumour mill and had as many spec scripts floating around the internet as Alien vs. Predator did).

After passing through numerous scripts and directors, Alien vs. Predator finally gained its feet under British genre director Paul W.S. Anderson. Anderson has made a number of genre films including Mortal Kombat (1995), Event Horizon (1997) – which was another variant on the nasty entity stalking people aboard a spaceship plot as patented by Alien, Soldier (1998), Resident Evil (2002), Death Race (2008), Resident Evil: Afterlife (2010), Resident Evil: Retribution (2012), Resident Evil: The Final Chapter (2016), Monster Hunter (2020) and Resident Evil: Welcome to Raccoon City (2021). Alien vs. Predator (arguably) marks the third film on Anderson’s part, following Mortal Kombat and Resident Evil, to be adapted from a videogame. (Subsequently, Anderson produced DOA: Dead or Alive (2006) and has announced films based on other games like Castlevania and Spy Hunter).

I must admit after Paul Anderson’s handling of Resident Evil, which had the capability of being a gorily satisfying zombie film but came out as a PG-rated scare-free horror show, I failed to feel particularly enthused about his Alien vs. Predator. Even less inspiring were the reports that emerged just prior to release of a battle where the studio demanded that the film be cut for PG-13 audiences. The film also gained a good deal of negative publicity after 20th Century Fox decided to open it without offering advance screenings to critics. This served to give the film a worse reputation that it might otherwise have received – leaving audiences with the perception that it was too bad to risk screening for critics (at least this was back when lack of screenings for critics was a rarity rather than commonplace).

Alien vs. Predator is better than such suggests. It works surprisingly well in most respects. Paul W.S. Anderson comes nowhere near generating the gruelling intensity of Ridley Scott or James Cameron in the first two Alien films or even John McTiernan in Predator; on the other hand, Alien vs. Predator is certainly a better entry than Alien: Resurrection. Once he gets to the main body of the film, Paul W.S. Anderson does a decent job of generating suspense and keeping the action move at a fast pace. The first set-piece where we get an Alien and a Predator taking one another on in slambang, hand-to-tentacle combat and the fabulous shot of both alien visages leering at one another in closeup has the audience cheering. The creature effects are excellent and there is an tremendous climax taking on the mother alien on the ice surface, which is reminiscent of the climactic showdown in Aliens.

On the minus side, the script is weakly developed. Paul W.S. Anderson does throw in one or two imaginative ideas such as having the last survivor and a Predator forced to mutually cooperate in order to escape the labyrinth. However, the characters are one-dimensional and Anderson expends no time in giving any of them any depth. The various rooms of the labyrinth have a certain gimmickiness – given Anderson’s predilection for videogame-adapted movies, it is hard at times not to see the film designed like a glorified videogame where each room has a series of traps that have to be navigated and/or contains weapons to add to one’s arsenal.

The biggest bugbear about the script is its downrightly nonsensical anthropology. Paul W.S. Anderson admitted in interviews that he was inspired by the writings of Erich von Daniken, the author of Chariots of the Gods (1968) and various sequels. In his books, Erich von Daniken made extensive claims that many ancient monuments could not have been built by the technology of the time and that the ancients had to have been aided by extraterrestrial technology, evidence of which can be seen in certain primitive drawings. Von Daniken’s scientific and historical inaccuracies and outright distortions of fact have been widely attacked by numerous specialists in the field but the ideas were popular in the 1970s and have fed into a number of genre films including Starship Invasions (1977), the original Battlestar Galactica (1978-9), Hangar 18 (1980), The Pumaman (1980), Sky Bandits/Sky Pirates (1985), Stargate (1994), Indiana Jones and the Kingdom of the Crystal Skull (2008), The Fourth Kind (2009), Stonehenge Apocalypse (2010), Killer Mountain (2011), Prometheus (2012), Prisoners of the Sun (2013) and Phoenix Forgotten (2017). For further on this, see the von Daniken documentary Chariots of the Gods (1970).

One of Anderson’s great howlers is the claim that the Predators inspired the first civilisations, where he cites the commonality of the pyramids in Egypt, Mexico and Cambodia. The biggest problem here is that the period that Anderson is talking about stretches all the way from Egypt, where the age of pyramid building started around 2700 B.C.; to the Maya and Toltecs (Teotihuacan was generally built around the 1st century B.C.); to the Khmer Empire in Cambodia where the pyramids were built around the 12th and 14th centuries A.D. – a stretch of some four thousand years. Added to this is the idea of a pyramid far beneath the ice – buried at the depth it is would have put the age of its construction more into hundreds of thousands of years, way before any trace of human civilisation. It is these purely nonsensical ideas that weakens what is otherwise an enjoyable film.

One of the other aspects that fans of the series can note is a number of in-references and in-jokes tossed in throughout. There is of course the appearance of Lance Henriksen, who played the android Bishop in Aliens and Alien3, who here plays a character named Charles Bishop Weyland. In that the Bishop android was made by the Weyland Yutani Corporation, this can be seen as a clear attempt to stitch up continuity. There is also a character named Mark Verheiden after the author of the first ever Aliens vs. Predator Dark Horse story. A clip for Frankenstein Meets the Wolf Man (1943) can be seen playing on a tv screen in the background, a sly in-joke in that Frankenstein Meets the Wolf Man was the first ever occasion that a studio (Universal) paired two of its monsters up on screen. Anderson even names the icebreaker that the mission gathers aboard the Piper Maru, a reference to and the name of an episode of tv’s The X Files (1993-2002, 2016-8).