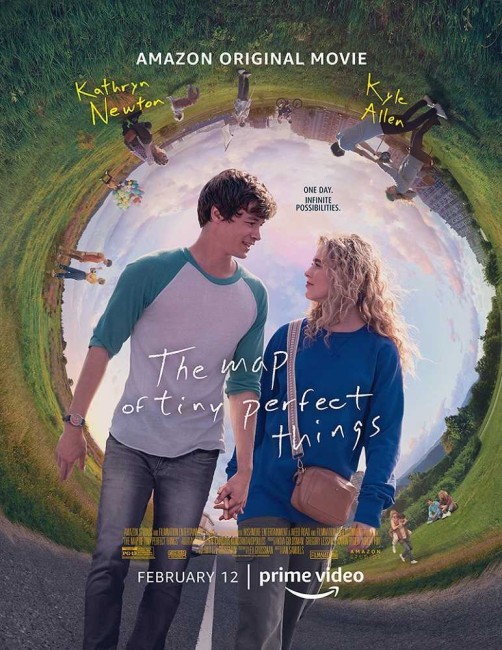 The teenage Mark has been trapped living the same day over and over. He amuses himself by mapping out every detail and happening around the town to the second. While waiting for things that are about to happen, he is startled as these are disrupted as a girl walks through. He follows her and this turns out to be Margaret who is also trapped repeating the same day. A friendship grows between the two of them. Mark introduces her to his map of tiny perfect things – a series of odd, amusing or beautiful things that happen at random around the town and the times he has mapped out for when these occur. Mark develops an attraction to Margaret but she has a secret about the reason she always insists on leaving at 6 pm.

Indeed, The Map of Tiny Perfect Things is the fourth variant on the timeloop premise one has seen in the last twelve months, following Boss Level, Palm Springs and Russian Doll. It leaves you wondering just how many creative variations on the theme it would be possible to do. The genre has become so prolific that the characters here can make direct comparison to Groundhog Day and to characters gaining new lives in videogames – the two most obvious sources of inspiration for the timeloop genre.

The Map of Tiny Perfect Things shares many of aspects in common with these other films. Both Palm Springs and Russian Doll did the variation of having two people trapped in the timeloop, while Palm Springs had earlier featured a romantic connection between the two people caught in a timeloop. The lack of surprise is that there is nothing particularly innovative about The Map of Tiny Perfect Things, the surprise is that it nevertheless does them well anyway.

The Map of Tiny Perfect Things conducts all of the familiar with charm. The scenes where Kyle Allen gets up in the morning, his walk through the streets to school, picking things up, catching rides, even bringing a pair of tongs to unobtrusively help a lady whose skirt is caught up comes with an assured sense of timing and opens the film with an appealing buoyance.

The relationship has considerable charms, especially from Kathryn Newton. The writing is at times nicely done, even comes with the addition of various philosophical musings. It is often a film of, as the title states, moments of directorial beauty – where Kyle Allen stages a mock-up of the Moon Landing for Kathryn Newton to play out her dream of being an astronaut, and of course the tour they go on of the tiny perfect moments of the day – a celebration of what is in effect the random and unseen, the sort of things that might be caught in a still moment by a photograph.

The only point the film falls down for me is near the end where Kathryn Newton creates a three-dimensional mobile map of the tiny perfect things and then comes to the conclusion that there is a pattern in all of these that points to a missing piece. The idea that random events that have been selected by a duo of people because of their beauty or quirkiness can have a pattern that is predetermined is an absurd one. It is something on the order of people seeing the face of Jesus in a piece of toast or the people in Room 237: Being an Inquiry Into The Shining in 9 Parts (2012) finding hidden meanings in the placement of soup cans and the carpet patterns in Stanley Kubrick’s The Shining (1980).

The film is written by Lev Grossman based on his own short story published as a novella in 2021. Grossman is a former journalist turned fiction writer best known for the Young Adult The Magicians books later made into the tv series The Magicians (2015-20). Director Ian Samuels is a relative newcomer who had previously made the teen film Sierra Burgess is a Loser (2018).