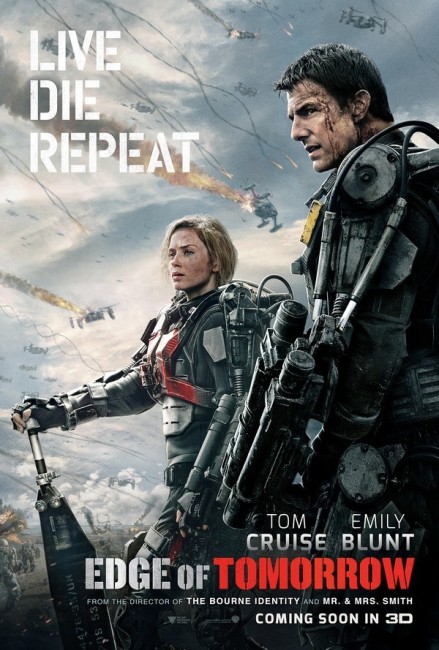 Earth has been invaded by the alien Mimics. Major William Cage, an American with an advertising background who has specialised in PR for the Defense Forces, is transferred to British command. When he learns that General Brigham wants to send him to France to film the big push back against the Mimic forces, Cage tries to get out of the assignment by blackmailing Brigham. Instead he is tasered and wakes up to find he has been thrown into the unruly infantry J-unit, designated a deserter. Everything he says to get out is ignored and he is dropped into the midst of combat the next morning, placed inside an armoured combat suit he does not know how to use, as the troupe is massacred. Cage manages to figure the weaponry out just as he is attacked by a Mimic, killing both it and himself. He comes around to find himself at the start of the previous day, waking up as he is transferred to J-unit. He tries to prevent the train of events that led to the disastrous route of the troupe, only to be killed and wake up again the previous day. During the course of repeated deaths that always reset to the previous day, by knowing what happens, he is able to save Rita Vrataski, a poster child hero of the war due to her heroic actions in Verdun, on the battlefield. She tells him to come and find her when he wakes up again. He does and she explains that he is able to constantly revive each day because he has absorbed the blood of a Mimic Alpha. The Mimics can reset each day and are able to win by knowing everything the enemy will do in advance. This is something he now shares because of the spilled blood. Through successive days, Cage organises Rita to train him in the use of the suit so they can find and destroy the Mimic Omega, the brain that controls every other unit.

Edge of Tomorrow is a film from Doug Liman who emerged in the late 1990s with smart indie works like Swingers (1996) and Go (1999). It was in the next few years that Liman proved himself with slick and exciting hits such as The Bourne Identity (2002) and Mr. & Mrs. Smith (2005), only falling down somewhat with his first genre outing, the teleportation film Jumper (2008). Liman is set to return to genre material with the upcoming Chaos Walking (2019), plus also produced the George R.R. Martin tv series Nightflyers (2018). Edge of Tomorrow is based on All You Need is Kill (2004), a Japanese short novel written for Young Adult audiences.

The basic set-up reminds of a good deal of Groundhog Day (1993), which had Bill Murray trapped in a timeloop forced to live the same day over and over. While both films approach the idea from almost opposing perspectives – Groundhog Day as a romantic comedy, Edge of Tomorrow as an alien invasion/war film – they share the theme of the man forced to endlessly repeat the same scenario until he finds the perfect winning strategy by bringing together everything he has learned. Soon after, Groundhog Day‘s timeloop scenario played in a number of other films such as 12:01 (1993), Retroactive (1997), Repeaters (2010), ARQ (2016), Before I Fall (2017), Happy Death Day (2017) and Naked (2017), even an entire tv series Day Break (2006-7). In particular, there are a number of similarities to Duncan Jones’ Source Code (2011), which had Jake Gyllenhaal projected into another man’s mind and repeatedly replaying the last few minutes leading up to a bomb going off aboard a train in different combinations in an effort to understand what happened.

That it ventures into a theme that has been dealt with several times before does not detract from the fact that Edge of Tomorrow is a sharp, intelligent and well made film (even more of a rarity for something pitched to the midst of the Hollywood summer season). There is the slim dividing line where Edge of Tomorrow could easily have tipped over to become a mindless Michael Bay-type action vehicle that was all empty spectacle focused around explosions, shooting and mass destruction – and certainly the climactic assault on the ruins of The Louvre with a downed plane does approach something of this. It is more the case though that the big spectacular action movie is an element happening in the background and clearly suborned to the story that takes place in the foreground.

The film has a strong character driven story – while most action films feature a lead who enters the show tough, dangerous and/or cocky and in command and fully assured of his abilities, by contrast here, Tom Cruise’s character starts out a slick hotshot whose first actions are to weasel out of combat duty and try to blackmail his superior officer before being listed as a deserter, thrust into combat untrained and without even the slightest clue how to get the safety off his weaponry. The strong arc he undergoes throughout the rest of the film comes to be how we see him being trained, passing through his multiple failures to gain assurance with his equipment and his eventual growth into the person who can singlehandedly lead the rest of the troupe on a mission to win the war.

Doug Liman drives the film with grit and intelligence. This could be Battle Los Angeles (2011) with a brain instead of patriotic flag-waving. I particularly liked the casual nonchalance with which Tom Cruise and Emily Blunt keep treating his daily death or the always reliable gag you invariably get in these timeloop films of Cruise becoming so familiar with people’s responses that he can tell them their entire life stories or avoid punches swung at him with his eyes closed.

What I also liked was the way that the plot manages to come with a number of twists that are constantly surprising. Unlike Groundhog Day and its abovementioned imitators, which are essentially about perfecting the same scenario until they get it right, the plot here is constantly changing when one avenue of approach proves impassable and heading off on another thread to the point that the film has the characters ranging between three different countries at various points.

Tom Cruise is one of the those love him or hate him actors but what you cannot deny is that he is a consummate professional in everything he does and is constantly pushing to make the films he is in the best he can. Emily Blunt is a rising actress I have admired. In my mind, she is always associated with British costume dramas or romantic/Chick Flick works. She doesn’t seem the sort of actress who readily suggests tough action heroine and so the surprise here is seeing cast as someone lithe, unsentimental and in charge and moreover one who is often ordering Tom Cruise about and running rings around him.

The scene-stealer of the show however manages to be Bill Paxton, an actor whose great presence has been missed on cinema screens for much of the 2000s, which he has mostly spent in the often thought-provoking tv series Big Love (2006-11). Here Paxton puts his all into the role of the bawling drill sergeant and manages to own most of the screen to frequently hilarious effect whenever he is around.

(Winner in this site’s Top 10 Films of 2014 list. Winner for Best Supporting Actor (Bill Paxton) and Nominee for Best Adapted Screenplay at this site’s Best of 2014 Awards).