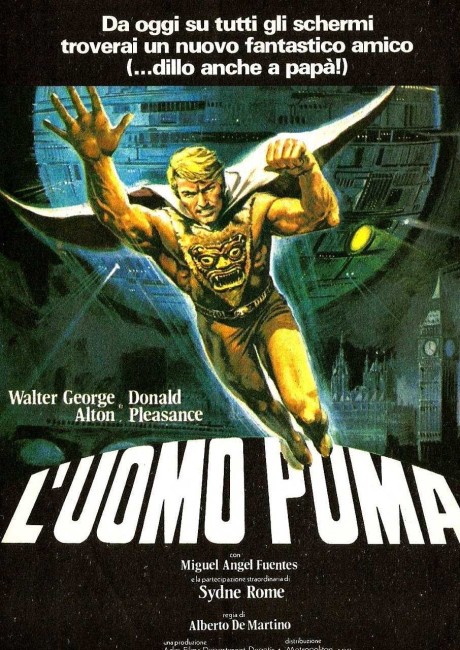 The villainous Kobras has a gold Aztec mask that can control minds. He and his henchmen are using this to eliminate various people. Tony Farms is an American palaeontologist studying at the museum in London. As Kobras’s people try to eliminate him, Tony is approached by Vadinho, a South American Indian, who explains that Tony is the predestined Pumaman. Vadinho insists that Tony wear an Aztec belt, telling how it was left by people from the stars and bequeaths the powers of the puma on the wearer. Tony ignores him to accept an invitation to dine at the Dutch embassy from the ambassador’s daughter Jane Dobson. However, this proves to be a trap set by Kobras. Tony is only able to flee by putting on the belt. As The Pumaman, he discovers he has the abilities to fly and teleport himself to different locations. Kobras now sends his men to eliminate Tony as standing in the way of his world-domination plans.

The Italian exploitation industry from the 1960s through to the late 1980s made copies of everybody else’s films like nobody else. The 70s/80s era was filled with a steady output of Westerns, action films, zombie films and Mad Max clones. The Pumaman is essentially a copy of the big hit of the Christopher Reeve Superman (1978).

The concept of the superhero who adopts animal powers also formed the basis of the short-lived tv series Manimal (1983) around the same time. That said, we never see The Pumaman actually transform into one of the animals, merely gain their powers, although quite what the ability to fly or teleport has to do with pumas is a scratch of the head.

Unfortunately, The Pumaman is operating with considerably less of a budget than the multi-million dollar Superman, which was able to draw on state of the art effects technology and was one of the most expensive films ever made in its day. As a result, when The Pumaman takes to the air, his flying is represented by some cheap-looking scenes where Walter George Alton is suspended on wires against back-projected footage. The main problem that sinks the film is that quite a reasonable portion of the show is dependent on these scenes of Alton in back-projected flight.

The other problem is that Walter George Alton lacks any kind of heroic stature. He is outfitted in an ill-fitting cape and gives the impression that he doesn’t seem to have any clue what he is doing there. He is not helped by the fact that the film lacks any real plot – he is a superhero who just stumbles into everything that happens – there is no real goal that he is trying to achieve or anything he seems to be fighting for, while the villain has a world takeover plot that is so vague we don’t even know what it entails. At least Donald Pleasence (ignominiously billed on the credits as Donald Pleasance) gets into the spirit of the occasion in playing the super-villain. (Pleasence called The Pumaman the worst film he had appeared in).

There was a popular fascination with the crackpot Ancient Astronauts theories of Erich Von Daniken in this era and The Pumaman gets right into these. Von Daniken theorised that aliens had visited Earth in the past, created many ancient monuments and their likeness were depicted in various statues and engravings – see the documentary Chariots of the Gods (1970) for a more detailed discussion. These ideas bled into a number of other films over the years with the likes of Stargate (1994) through Indiana Jones and the Kingdom of the Crystal Skull (2008) to Prometheus (2012). (For more details see Films About Ancient Astronauts). Here the film ties into von Daniken’s claims that South American culture of the Aztecs and Incas was influenced by alien visitors and that said aliens bequeathed the artifacts. At the end of the film, a UFO appears in front of a really ratty looking mockup of Stonehenge,

Alberto De Martino (1929-2015) was a director in the Italian exploitation genre and covered most genres during his career including the peplum and the giallo. His other genre films include:- Medusa Against the Son of Hercules (1962), the Gothic horror The Blancheville Monster (1963), The Triumph of Hercules (1964), the spy film OK Connery/Operation Kid Brother (1967), the giallo The Man with the Icy Eyes (1971), the possession and exorcism film The Tempter/The Antichrist (1974), the Antichrist film Holocaust 2000/The Chosen (1977), the psychic film Blood Link (1982), Miami Golem (1985) and Formula for a Murder (1985).